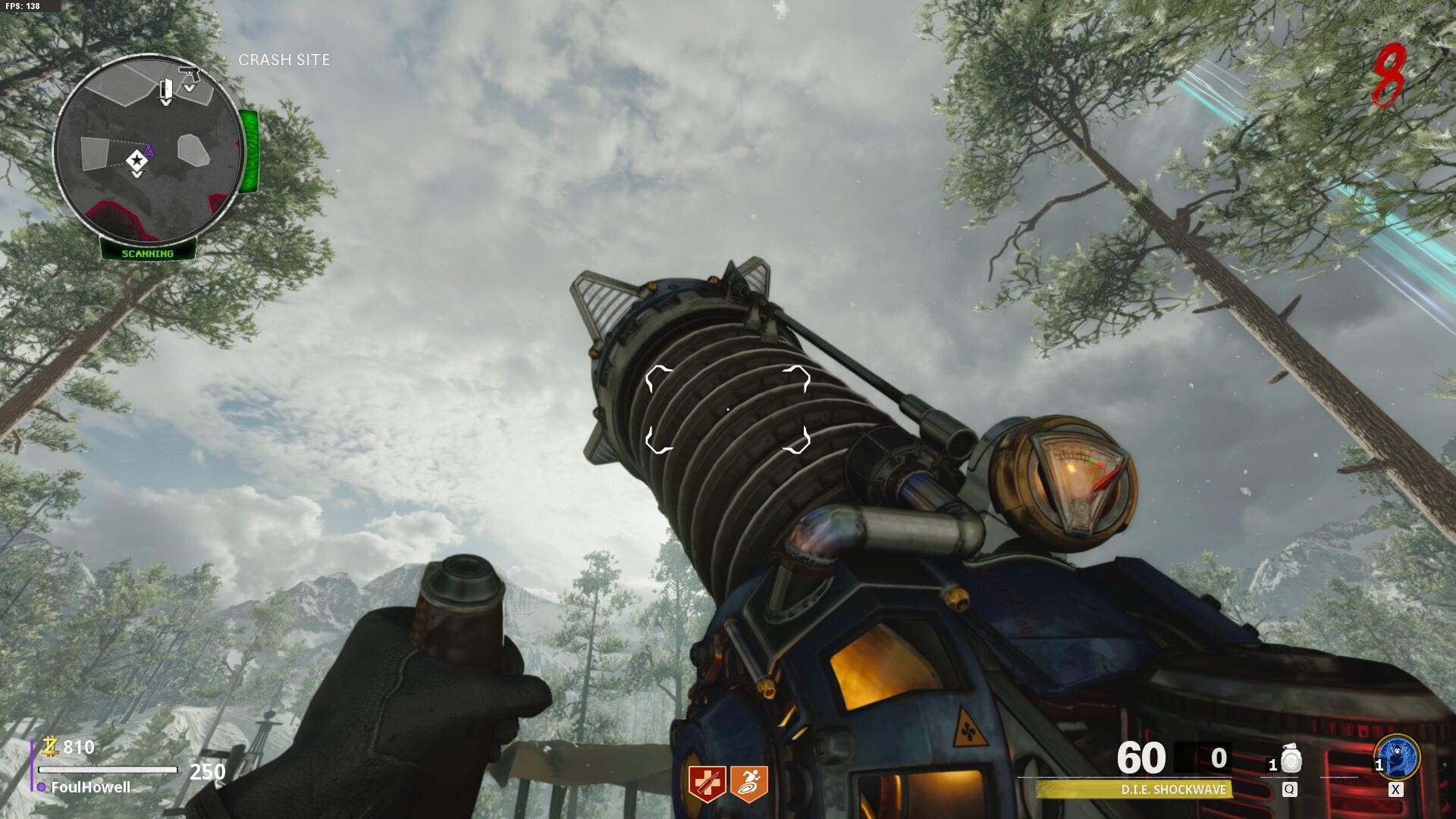 When you’re upgrading most weapons in Call of Duty Zombies, the Pack-a-Punch Machine is where you need to go. For some Wonder Weapons though, the process can be a bit more involved. The D.I.E. Shockwave in the map Die Maschine is no exception. This time, there are four different elemental upgrades you can apply to it, similar to the staffs in Black Ops 2’s Origins map. This guide will walk you through how to get every upgrade for the Wonder Weapon in Black Ops Cold War Zombies.

It’s important to note that you will need the power on and already have the base D.I.E. Shockwave. We have guides up on how to get both if you need help with either.

To get the Nova 5 upgrade started, head to the mezzanine location and in front of the slope leading to the roof, you should see a canister outlined in yellow in an area you can’t reach.

With the D.I.E. in hand, hold the button you typically use to aim down sights to suck the object towards you (you’ll have to fire a shot if you haven’t as the weapon only sucks when missing ammo). After a couple of seconds, it should fly towards you, allowing you to pick it up.

Next, you need to make your way down into the bunker into the weapons lab where Deadshot Daquiri is. On the lower floor with Deadshot and at the end of the hall, there should be a place for you to insert the canister you sucked up and the game will prompt you with the button to press.

Now you must kill one plague hound near the canister so that it can be filled with gas. You’ll know it worked if the canister gives you a button prompt when nearby to pick it back up.

If not, kill a few more plague hounds as close as you can to it. You should see the gas get absorbed into the canister.

With the filled canister, head to the plane crash site and look for a box up against the wall which you would pass to get to Stamin-Up. Press the button the game prompts you with to put the canister on the box and then melee it. It should explode and now allow you to swap out the Shockwave for the Nova 5 upgrade.

To get the Electrobolt upgrade, you’ll first need to head into the Dark Aether specifically through the portal underneath Pack-a-Punch and behind the stairs. You’ll now need to find three yellow crystals around the map and suck up their energy with the D.I.E. Shockwave. When sucked up, you’ll then need to fire the charged blast at the chest on the bottom floor of the particle accelerator room near where you teleported from. You can only do one crystal at a time and if you shoot before you get there, you’ll lose the charge so be careful (you can swap to your other weapon).

The first crystal can be found in the crash site between Juggernog and the cave entrance to the bunker. The second can be found on the roof of Nacht Der Untoten in the penthouse room. It should be to the right of the Wonderfizz perk machine. The third and final crystal should be in the pond area close to the mystery box spawn location there. Once you’ve done the process for all three crystals, the upgrade can be received from the box you’ve been shooting the charged blasts at.

To begin the Cryo-Emitter upgrade, first head to the penthouse floor of Nacht (the roof). To the left of the green tented area and facing the pond, there should be a crate. Shoot it with your D.I.E. Shockwave and head down to where it fell in the pond to pick up the flask that dropped out of it with the button prompt given.

You don’t have to head too far for this step. From the fallen crate, head like you’re going to the crash site but stop at the first tree with the weird pine cone thing on the side of it. You’re going to need a Megaton to spawn and get it to shoot its green stuff at the pine cone. The easiest way to accomplish this is to get some distance so that the tree is between you and the Megaton which should bait its ranged attack if you’re far enough. You’ll know it connected when one of the characters comments on it dripping sap and the pine cone turning purple.

The next step now is to insert the flask under the pine cone with the given button prompt and wait for a bit. After a few minutes, the flask should be filled and outlined yellow for you to now pick up. Now take the flask to the medical bay where Speed Cola is and look for the chest close to the door to the particle accelerator room. Press the button prompted to you and you’ll now be able to make your Wonder Weapon the D.I.E. Cryo-Emitter.

Getting the Thermophasic Upgrade in Black Ops Cold War Zombies

For this upgrade, you’ll need to head to the Dark Aether through the portal that spawns at the pond area specifically. Once through it, make your way to the crash site and look for a box underneath the floating plane wreckage. Melee the box and press the prompted button to get a fuse which you’ll need to take to a workbench on the bottom floor of the weapons lab near Deadshot Daquiri. Press the prompted button to insert it into the machine. Now head back to the pond area and mantle on the bed of the truck there to find the box holding the Thermophasic upgrade.