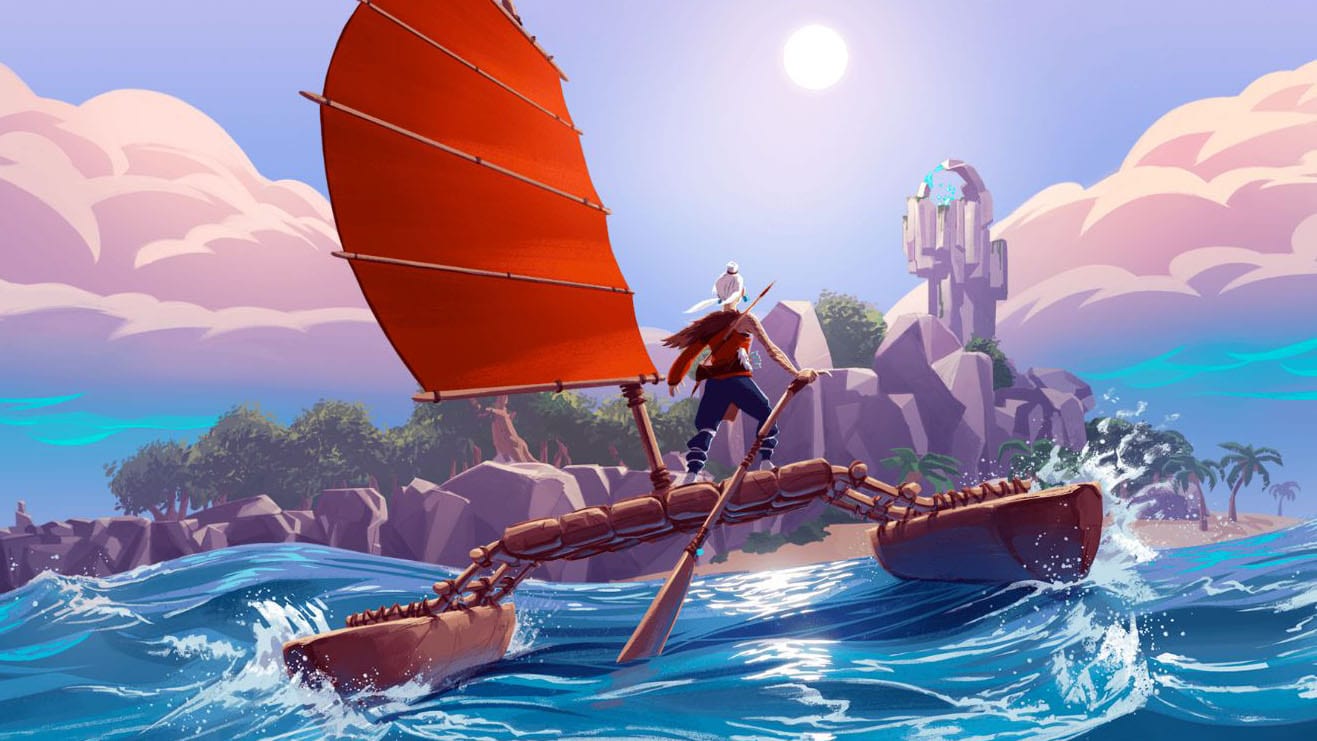 Ever since I laid eyes on Windbound in its announcement trailer, I was intrigued. Its open world elements and the freedom it gives players to explore its high seas and the uncharted islands that nestle themselves in it evoked that same sense of mystifying wonder that some of my personal favorites of recent years like Breath of the Wild, and What Remains of Edith Finch perfected in their open world design and narrative respectively. There’s a lot to love about Windbound, even if it is a rather simple survival game.

I was recently given the opportunity to go hands-on with Windbound’s opening section, and a short segment of gameplay from later on in the game, and came away feeling pretty darn positive about the whole thing.

Players find themselves in control of Kara, a young warrior who finds herself shipwrecked and completely on her own on the Forbidden Islands. With nothing to her name, she must find a way to survive by hunting and scavenging the various islands she stumbles upon as she explores the high seas.

The first segment we played took place at the very beginning of Kara’s adventure. I explored typical uninhabited islands, with flora and fauna bringing bursts of color to the beige sands and blue waters that enveloped them. Windbound’s art style is the first thing you’ll notice, clearly taking cues from The Legend of Zelda: Breath of the Wild.

It doesn’t just look pretty, but feels like a perfect match for the constant sense of discovery and adventure that Windbound dripfeeds you. There’s detail and beauty in its environments, without going down the photorealism route. Windbound’s visuals are timelessly beautiful.

As I reached the first island, I found a large pillar. Interacting with this pillar triggered some sort of beacon, and one of three icons on my screen was illuminated upon doing so. You’re never told what you should or shouldn’t be doing in Windbound, so assuming I was on the right path, I hopped onto my small boat and took to the seas to try and find the remaining two.

Sailing actually feels pretty good, too, with players required to row or sail their ship from island to island. Wind direction is a significant factor you have to taken into account when traveling, tightening or loosening your sails depending on whether you’re sailing into, across, or with the wind.

From our time in stages one and four of Windbound, sailing certainly feels to provide an ample gameplay challenge as the game progresses with choppier waters and harsher winds in the latter stage compared to the relatively tranquil seas in the first. It gets you thinking more about how you’ll reach your destination and what ship upgrades may benefit you most on your quest.

You’ll spend a lot of time sailing the turbulent seas of Windbound and as became clear when we were skipped forward to the game’s fourth stage, the means in which you island hop can be customized to your own specifications. Do you want multiple sails, or no sails at all? Do you want to add bamboo decking and build a bag rack to help bolster your carry capacity, or would you rather place a campfire on it so you can quickly cook meat or make leather from animal hides? The choice is entirely yours, and ultimately feeds into how your Windbound experience unfolds.

That’s the beauty of Windbound. Even in the two sections of the game this preview is focused on, I never felt like I had to do anything in any particular way, or that I was being pressured to push on to the next section. I was free to venture off the beaten path and have Kara explore the farthest corners of the stage’s map –the fog of war only being cleared as I sailed over it– as long as I could survive.

Windbound is a survival game, and so you will need to manage Kara’s health and stamina gauges by foraging, hunting and preparing food. Berries can be found on some islands, giving you a small boost to health and stamina, or you can take down one of the native creatures and cook its meat to restore a larger amount. I’ve never been the biggest fan of hunger and thirst meters in games –they’re never really fun, let’s be honest– and I felt no different in Windbound.

Fortunately, it never felt overwhelming enough to detract from the standout sections of Windbound. Uncovering a new island seldom gets boring. Thanks to procedurally-generated islands, each time you uncover one you never know quite what you’re going to get.

Our time in Chapter 4 only reinforced this, with swampy islands popping up to offer some variation on our adventure. With these came new creatures to battle and strip for resources, flora and fauna to create new tools and ship upgrades, and more story tidbits to uncover.

It was only during my stint in Chapter 4 that one of Windbound’s most significant downsides became clear. Those three beacons we were seeking out in the game’s first chapter appear to be the recurring main objective. This would have been fine had they perhaps got trickier to scale and interact with, but they don’t.

While we don’t know exactly how the rest of the game will pan out, the similarities from what we could gather between Chapters 1 and 4 in their main objectives were a little disappointing. Sure, you may have to beat a few different enemy types along the way, but it still all feels a little too simple. Climb some conveniently-placed pillars, interact with the beacon, move on.

Speaking of enemy types, Windbound’s combat feels a little barebones. You’ll have an arsenal of spears, slings and even bows and arrows to use, but you’ll be able to stab and fire your ranged weapon, and perform a basic dodge. That’s it. There’s nothing more to it. While there are a few different types of projectile, my battles with enemies often resulted in repeated stabbing attacks with my spear and the occasional slinging of a rock.

From what I’ve played of Windbound, it may be one of the most tranquil, relaxing and mysterious games I’ve played this year. I can imagine myself kicking back after a long day and getting lost on its towering waves and tucked-away islands, desperately trying to piece together the secrets these forbidden waters hide. Its main objectives may get a little samey, and the combat a little too linear, but I still want to keep exploring all the same.