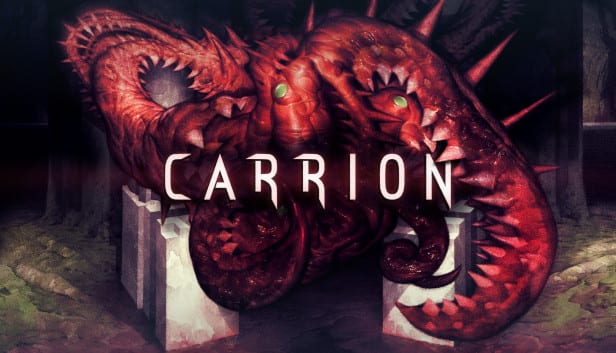 Every great horror story needs a monster. Whether it be a grotesque beast, a supernatural entity, or simply the horror that lurks within man, you need an effective, scary antagonist to get horror right.

But what if the script was flipped? What if you took a story like John Carpenter’s 1982 horror classic The Thing, and placed the titular creature in the protagonist role? Chances are, you’d get something along the lines of Carrion, a “reverse horror” Metroidvania from Phobia Studio and Devolver Digital.

Carrion kicks off with a bang, as you, a fleshy, tentacled meat blob of a creature, escape from your containment tank and into the vents of a sprawling facility. It’s not long before you’re tearing open grates and snagging humans with your prehensile tentacles, dragging them into your fleshy, toothed maw. And as you eat your way through the facility, you’ll grow in size, gain new abilities, and become that much more of a threat.

Right off the bat, Carrion’s basic movement is incredibly fun. There’s no running or jumping in this game; instead, you move around by dragging your bloody, meaty mass across ceilings and floors using an endless storm of adhesive tentacles. In the Steam version, this movement is controlled simply by the left mouse button, letting you swing your fleshy self all over the place.

The movement is responsive, quick, and has a real sense of satisfying momentum. When you get your bearings with the basic movement controls, there’s a great flow to it that makes even the simplest bits of traversal fun. Add that to the game’s well-animated gross-yet-gorgeous pixel art style, and you have a great amount of simple, moment-to-moment enjoyment.

However, with all that momentum, making small movements can be rather difficult. There were times when I tried to creep forward slightly, only to accidentally fling myself out of my hiding place, but they were few and far between.

Less good things can be said about the game’s other basic ability – the prehensile tentacle. This ability, controlled by the right mouse button, extends a special tentacle that can grab onto and interact with various items, like grates, levers, and of course, humans.

Unfortunately, it’s a lot more fidgety than movement is; the hitbox for grabbing is rather precise, and when you’re first trying to grab something, it can slip out of your grasp rather easily for a bit before you properly latch on.

When this mechanic is integral to restoring health –which you do by grabbing and dragging humans into your maw– it can make some of the game’s combat sections more difficult when health refills slip out of your arms. It’s fitting for a gooey tentacle monster, but frustrating for the player controlling it.

As you make your way through the facility and break into new areas, you’ll acquire new abilities by busting into other containment tanks and absorbing DNA. This is where the game’s Metroidvania element comes into play, as all of these abilities help you bypass obstacles, opening up new areas of the facility.

All of these abilities are rather novel for a Metroidvania as well, as befitting of such an atypical protagonist. I won’t spoil what they are for those who might be looking into playing the game, but they’re all fun, interesting, and have unique uses. However, there’s one aspect that really makes these abilities even more interesting: they’re all size-locked.

As you play the game, your creature will grow in size by eating humans or absorbing DNA. Throughout the game, you’ll hit three different size tiers –small, medium, and large, indicated not only by the obvious size of your creature, but also the color of its eyes, which are blue, orange, and red, respectively. And depending on your size, you’ll also have access to different abilities!

Size-locking these abilities is a really interesting choice by the developers. On one hand, it makes for some very interesting puzzles in which you need to change your size mid-puzzle, often multiple times, in order to complete them.

On the other hand, the game’s mechanics for size-changing are a little obtuse, making some puzzles more of a chore than a challenge. To grow, you’ll need to either eat enough humans, or find a mass-restoring save point. To shrink, you’ll either need to take enough damage to be shrunk down, or you’ll need to find a miasma pool that lets you deposit biomass.

In either case, these resources could either be readily available, or numerous rooms away, making some challenges require annoying backtracking more than actual critical thought. It’s an interesting mechanic, but size-changing resources should have been made more readily available for certain challenges when the team decided to make it an integral aspect of the game.

In terms of plot, the game is for the most part pretty clear cut –you’re a big fleshy mass of teeth and tentacles trying to escape a mysterious facility, no matter how much carnage and destruction you have to cause to do so. There are additional bits of story throughout the game, however, accessed via squeezing yourself into computer terminals, that detail the origins of both the creature and the facility containing it.

For all Carrion does right, and there is plenty it does right, there’s also plenty of glaring issues with the game. The biggest issue with these by far is the complete lack of any kind of map function in the game. In a Metroidvania title, exploration is key –players love to squeeze every bit of enjoyment they can out of their favorite titles by exploring even the tiniest corners of the map.

In order to do that properly, however, you need to be able to keep track of where you are –a benefit Carrion doesn’t afford its players. As a result, it’s incredibly easy to get lost in the many of facility’s similar-looking rooms, lose track of your next objective, or miss a collectible and have no idea where it is. An update to add even a basic pause screen map would go a long way, but as it stands, it is Carrion’s biggest problem.

It’s not the only one, though; the game does end up lacking quite a bit on the combat front, especially in variety. Unless you’re particularly large, you won’t be taking enemies head-on due to you being surprisingly fragile. That means a lot of time you’ll be sat waiting for foes to walk into just the right spot in order to grab them and pull them into the darkness.

As satisfying as that sounds, pretty much every foe dies rather quickly, so you don’t get a ton of mileage out of your abilities in combat like you would in other Metroidvanias. The one exception is the walker robot, but they shred you so quickly that attacking one head-on with your abilities is pretty much suicide, which means even combat with the game’s toughest enemies is still all about waiting.

It makes it that much more of a disappointment then, that the game lacks boss battles of any kind. You’d think that a facility housing a creature like this game’s protagonist would be host to all sorts of strange and powerful monstrosities, which you’d have to defeat and consume in order to acquire their abilities for yourself.

Unfortunately, that’s not the case –upgrade and ability DNA is collected simply by shaking open containment pods. It’s a missed opportunity to give the game more enemy variety and more memorable moments –both of which end up being rather lacking in the larger scope of things.

All in all, Carrion feels like an incredibly strong base for a game that never really hits the potential highs it could achieve. Its abilities, gameplay, and even its basic concept are all so novel for the genre, but it doesn’t use any of them to their full potential. There’s so many places it could go, but it’s too short to get to any of them.

Conceptually, Carrion is one of the most promising Metroidvanias in the genre, but without any of the highs that make the standout games of the genre so beloved. It’s almost painful how close it comes to being so great, but it falls short of making the mark. It’s not something that could be solved fully with patches or DLC, but were there to be a sequel, I’d be eagerly watching out for it.

As it stands, Carrion is an impressive, creative, and inventive game on paper. In practice, it ends up being a rather middle-of-the-road experience, with unfulfilled promised of potential greatness. If you’re looking for an inventive new take on the Metroidvania genre, Carrion might be what you’re looking for –but don’t go into it expecting it to be Super Meat-troid.