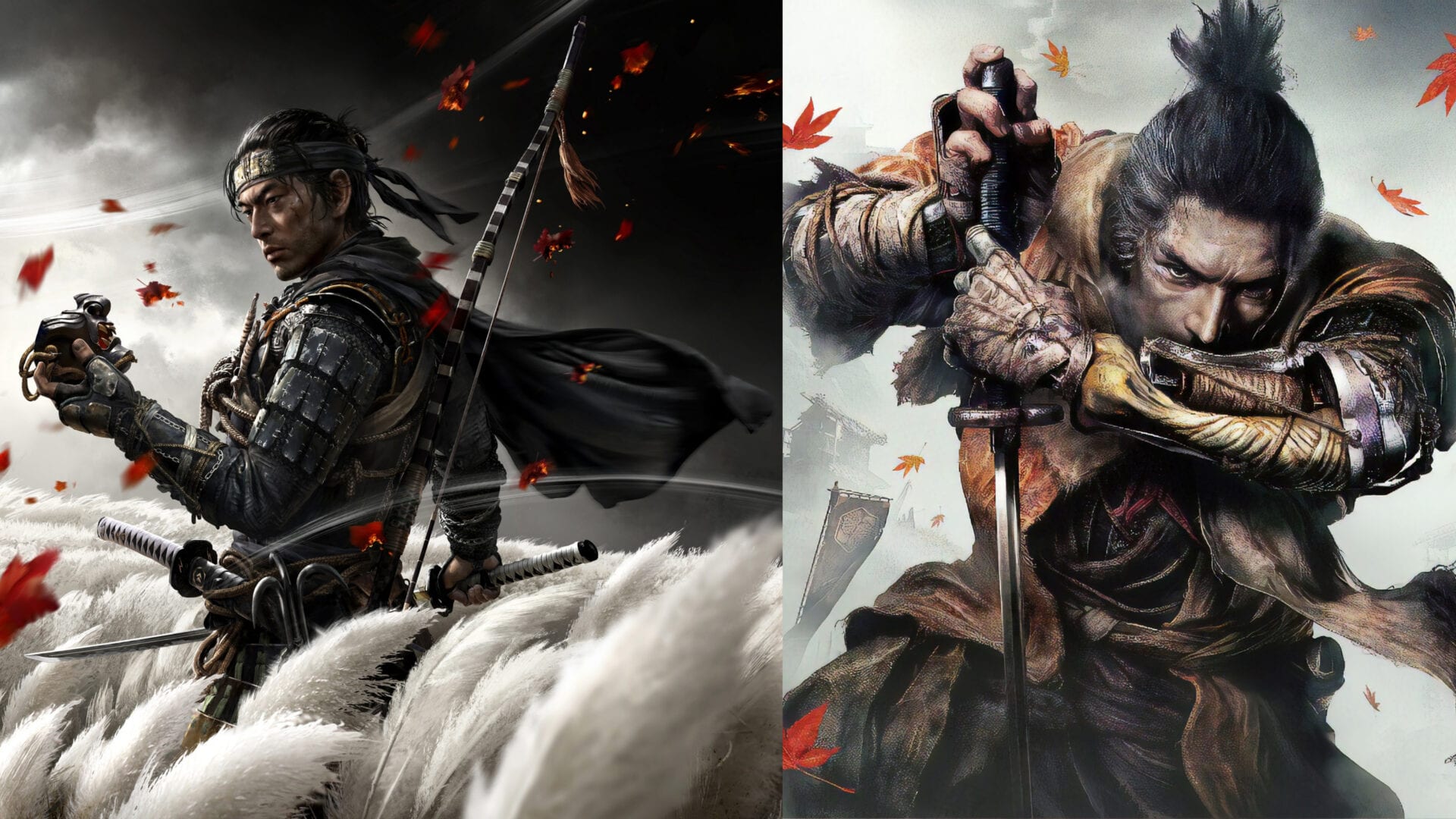 While made by different developers, both Ghost of Tsushima and Sekiro: Shadows Die Twice are set in Japan or, in Sekiro’s case, a heavily Japanese inspired setting. Because of this, they utilize similar combat systems.

Both focus on sword fighting, parrying, dodging, and overwhelming the enemy with fast moves. However, Ghost of Tsushima has a lot more tools and gadgets available for use compared to Sekiro.

In Ghost of Tsushima, you have your katana, a dagger, two separate bows, bombs, and distraction tools to defeat your enemy. Additionally, there are a variety of Stances that you can switch between that are tailored to specific enemy types and builds. You also have the option to use stealth over head on action to defeat enemies. This makes combat a lot more diverse and dynamic.

In Sekiro, you only really have your main weapon and your Shinobi Prosthetic at your disposal. Combat in this game is more heavily focused on breaking the enemy’s guard through swift parries that require you to watch for enemy movements. Sekiro also has a stealth mechanic but it’s not as fleshed out as Ghost of Tsushima’s.

Like the other FromSoftware games, Sekiro: Shadows Die Twice has heart-pumping and exhilarating combat that requires you to be on your toes.

However, Ghost of Tsushima just barely squeezes by with its more diverse gameplay.

Both Ghost of Tsushima and Sekiro have interesting boss fights that require you to be the best at combat to beat them. FromSoftware might as well be the king of boss designs at this point since these developers have come out with some fantastically designed bosses.

Because of this, Sekiro: Shadows Die Twice has plenty of diverse boss fights including those involving supernatural demons, giant apes, big samurai with even bigger swords, headless horrors, and Sekiro’s father figure who easily kicks your ass.

Due to this diversity, these bosses have their own unique fighting styles so nearly every boss encounter in Sekiro is different. You have to tailor your own skills and tools in the best way to take them out.

Meanwhile, in Ghost of Tsushima, this game is limited by the fact that it’s more history than fantasy compared to Sekiro. While aesthetically pleasing, many of the bosses you encounter are very similar and you essentially don’t need to change much to defeat them. A parry here and there more or less gets the job done.

These are good old fashioned duels so they’re 1v1 fights. Not much happens dynamically here compared to Sekiro: Shadows Die Twice where you end up fighting an angry man on a horse in a huge arena.

Ghost of Tsushima’s boss fights work just fine in the context of the game but Sekiro: Shadows Die Twice just adds so much more to its own.

Ghost of Tsushima and Sekiro are similar in the way they utilize leveling. You only have one set of weapons you can use and, because of that, leveling is restricted to those specific weapons and equipment. Additionally, there are no skill points to invest in for specific areas like dexterity or strength that you’d usually see in a FromSoftware game or another RPG.

Both games also allow you to unlock specific stances and move sets that you can invest points in for further advancement.

Sekiro has a wide range of skills and upgrades that you can tailor to your specific playstyle. There are also Prayer Beads and Memories you can use to increase weapon damage and health points.

However, Ghost of Tsushima has a huge selection of leveling. Weapons, armor, and ammo capacity have a progressive linear path of upgrades that use materials you need to actively collect out in the world.

Specific skills like Assassinations and Focused Hearing each have upgrades you can buy with Technique Points. These points can also be used on Ghost Weapon upgrades and unlocks for the four Sword Stances.

There are also charms you can find out in the world that give tiny buffs for your character.

Add in the fact that there are also cosmetics like armor dyes, sword kits, horse saddles, and headbands, Ghost of Tsushima has a lot of customization compared to Sekiro.

Ghost of Tsushima and Sekiro deviate a bit here when it comes to storytelling. FromSoftware games have a unique way of telling their stories and while Sekiro doesn’t do it in the same way the Soulsborne games do, it still doesn’t outright tell you much of what’s going on.

You have to be an active participant when it comes to those games. Luckily, Sekiro makes it a lot easier this time around with a voiced protagonist. The story becomes a lot more understandable and meaningful especially when it comes to the boss fights that are effortlessly weaved into the plot.

There’s a depth of loyalty to the relationship between Sekiro and Kuro that essentially shapes the entirety of the game’s story. It makes all of the work Sekiro puts in to protect him all the more meaningful.

Ghost of Tsushima also has a compelling story that’s centered around protecting and saving people. The characters are dynamic, deep, and complex to the point that there’s a level of realism to them that you don’t often see in other characters. This game portrays a long journey of honor, loyalty, morality, emotions, and the horrors of war.

Both games honestly have very intriguing stories that are supplemented by their respective gameplay and boss designs. No one winner comes out at the top.

Ghost of Tsushima and Sekiro are similarly set in Feudal Japan. However, they both portray it a bit differently.

Sekiro manages to weave historical context and supernatural elements together to surprisingly create a world that’s still rather realistic despite all of the magical elements. The world’s setting is brutal and horrific and the game easily shows this through enemy designs, the characters, and the boss fights.

The fictional world Sekiro is set in is also gorgeous with its Japanese architecture, temples, castles, and broken down buildings. This game is telling a story through its world and it’s doing a great job of it.

Fitting into Japanese culture, the island of Tsushima is portrayed so beautifully and gorgeously that every part of it can bring a tear to your eye. The wind blows leaves from trees, pushes through the grass, and flutters your cape. This game also utilizes very adaptive and dynamic lighting that reflects the glint of katanas and perfectly shines through trees.

Ghost of Tsushima also takes inspiration from old school Japanese action movies so it also utilizes occasional stylized and over the top battle sequences. It also allows you to turn on a black and white mode that is inspired by Akira Kurosawa, a famous Japanese filmmaker.

While both beautiful and unique depictions of Feudal Japan, Ghost of Tsushima squeezes by with its absolutely breathtaking scenery.

Ghost of Tsushima just barely squeezes by as the winner of this battle. Both games are entertaining and intriguing depictions of Feudal Japan with exciting gameplay but Ghost of Tsushima has Sekiro beat as the better action game by the tiniest bit.

Sekiro is still a worthy game to play especially for fans of the Soulsborne series. Its combat is fresh and exhilarating but Ghost of Tsushima adds so much more than combat to its own game. A great story, gorgeous scenery, huge customization, petting foxes, diverse gameplay, and so much more add to the brilliance of this game. It also embraces and utilizes stylized combat that makes many encounters memorable.

Maybe Ghost of Tsushima will end up getting game of the year for 2020 like Sekiro did for 2019 at The Game Awards. Either way, we’re so glad this game exists.