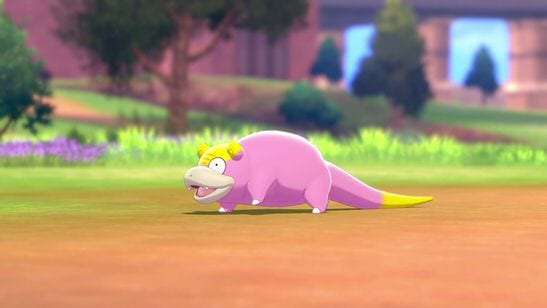 How to Find & Catch the Fast Slowpoke

After the cutscene, go to the Soothing Wetlands by taking the path to the left of the Dojo. All three Slowpokes are in this area, if you enter a new area you went too far.

Explore the left, center, and right areas of the Soothing Wetlands and look for the slowpokes that are zipping around kicking up dust and use your bike to cut them off and get out in front of them.

It’s important to note that you cannot actually catch the fast Slowpoke. You can only battle them. Sorry but those are Mustard’s Pokemon.

Once you’re in battle, just defeat them and you’ll get the pieces of Klara’s uniform that you need. They will be appropriately leveled and you shouldn’t have any trouble beating them assuming you aren’t doing something weird like carrying one Pokemon with you that is weak to Psychic. If you are, don’t do that.

Once you beat all three, go ahead and return to the Dojo to continue the quest.

That’s all you need to know for how to catch the fast Slowpoke in the Pokemon Isle of Armor expansion for Sword and Shield. Best of luck obtaining the secret dojo armor of the Isle of Armor.

For even more tips and tricks, be sure to consult our ever-expanding Guide Wiki.