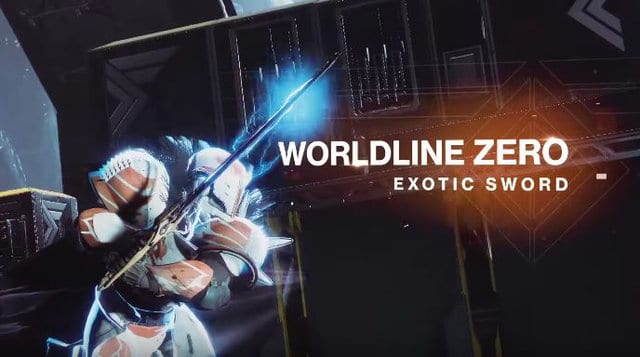 Swords are seeing a resurgence in Destiny 2. For most of the game’s lifespan, swords were a novelty weapon type that was fine for cutting through some red and yellow bars in easy content but not much else. Recently though, a series of buffs coupled with new powerful legendary swords and mods have made swords DPS monsters against anything that can be reasonably whacked with one.

While this movement towards swords being good has been brewing in Destiny 2 over the last few seasons, it was cemented with Season of the Arrivals after the release of two new powerful legendary weapons: Falling Guillotine and Temptation’s Hook.

The way these two weapons operate should trigger fond memories of Destiny 1 for fans that remember Dark Drinker and Bolt Caster respectively, as they behave very similarly.

Falling Guillotine has a spin-attack that can not only clear out groups of enemies, but also do solid single target damage with each hit. Temptation’s Hook has the utility of being able to hit enemies pretty hard at a range with its heavy attack.

These are very fun and powerful legendary swords that players should definitely grind for during Season of the Arrivals.

There’s just one problem with this development: Dark Drinker and Boltcaster already had copycats in Destiny 2 in a way, in the form of the exotics Worldline Zero and Black Talon. While not 1:1 reprisals, Worldline Zero allowed players to do the spin attack (after sprinting) and Black Talon could fire off attacks from range.

While Falling Guillotine and Temptation’s Hook don’t work exactly like those weapons, with the right perk set on them they can pretty much function just as well, if not better than the exotics, while not taking up an exotic slot.

Worldline Zero has been lackluster for everything other than using it to speedrun since it has existed. Black Talon had a niche with ranged attacks, and while it still does it better than Temptation’s Hook, is it really worth using up an exotic right now? I’d say the answer to that question is no, even with the catalyst.

Both of these weapons need some love in the upcoming Beyond Light expansion. Although exotics are sunset proof, these swords weren’t all that interesting other than some very situational uses before sunsetting was announced.

Meanwhile, Falling Guillotine and Temptation’s Hook are the darlings of Season of the Arrivals. If swords are so hot right now, you’d love to see Whirlwind Zero and Black Talon be a viable PvE option for the most dedicated of sword users.

It’s up to Bungie to decide whether or not they want the exotic swords to stand out or not, but here’s a couple of suggestions for them.

If Bungie is gonna insist on making us sprint before using Worldline Zero’s Tesseract spin attack, allow it to synergize with the light attacks that are likely to follow after spinning onto something that doesn’t die. Perhaps it could trigger a significant damage boost to light attacks for a certain amount of time following a spin.

This could create a fun chain of spinning into a group of enemies, unloading with some light attacks while the buff is up and then doing it all over again.

Black Talon needs something to make its ranged attack more unique since Caster frame swords are a thing now. Perhaps the Crow’s Wings attack could jump to nearby enemies if it kills its target, similar to middle tree Sentinel’s grenade/melee attacks.

Launching two or three Crow’s Wings attacks onto a pack of red bars and watching them get cut through from a distance all while using a sword would be incredibly satisfying; and would it really be that much more OP than what Trinity Ghoul is doing right now with its catalyst?

Those are just some crackpot ideas anyway. The easy/lazy solution would just be to give them straight damage bonuses, but it still wouldn’t make the swords feel exotic compared to Falling Guillotine and Temptation’s Hook.

That’s the main problem here, and while I’m glad these new classes of legendary swords exist, I hope Bungie is aware that as a result, the exotic swords need some attention now to make them feel exotic again.