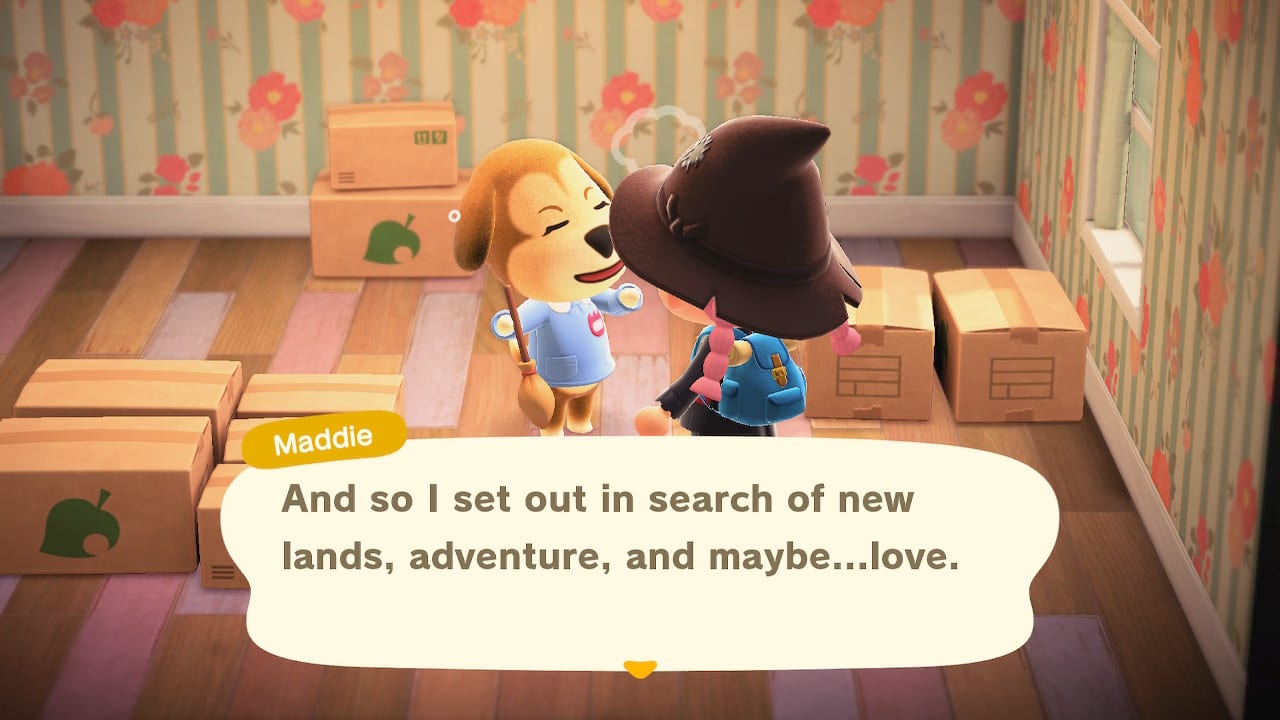 After 160 hours, it was finally time to reach a certain new milestone of my journey in Animal Crossing: New Horizons. I’d seen and heard of players obsessing over their villagers to a concerning degree before, but I never quite understood their passion for these virtual talking animals. Until now.

Unlike a certain trash koala that I couldn’t wait to get rid of since the very start of the game, Maddie was a dog villager with a pop star personality that just brightened up my island every day I talked to her. She was one of my first five villagers, though, which meant that she could never be upgraded to her unique house, and would always be stuck with a generic home for her in-game personality type.

The first time she asked if she should move away, I answered with a very vehement “no.” She was glad that I wanted her to stay, then went about the rest of her day.

But as my island developed and more villagers came to stay, I started to notice the appeal of having unique houses for each of them. After a while, Maddie’s generic little home started to make me sad. She’s a pop star, dammit. She’s gonna make it big someday; she deserves a proper house to live in.

So when she asked me again if she should move away, I answered sadly, “Yes… you should.”

Almost immediately, I regretted my decision. I shut off my console and booted up the game again, hoping that it hadn’t auto-saved just yet.

I went to speak with Maddie at her home, and yup, she’d already made up her mind. She was leaving the next day. Even she had trouble leaving everything behind.

The anger and frustration I felt passed quickly. Look, I’m an adult. I’ve learned to deal with my overwhelmingly negative emotions in a healthy manner.

After hitting Tipper with a net about 1,000 times, the anger subsided.

The next morning, I’d missed my chance to personally give Maddie a farewell present, so I decided to mail it to her. This was my last chance to really say goodbye after all. I was also low-key hoping this would convince her to stay, even though I knew there was no way the game would let me walk back that decision.

I went to Maddie’s house to talk to her one last time and of course, of course, she was wearing that kid’s smock that I’d given to her so long ago. When we finally became true friends. When we knew we’d always have each other’s backs.

Not wanting her to just disappear into the video game void of pixels and bytes, I then put out a call on Twitter and Discord, seeing if I could find anyone that would be able to take her in and give her a good home. Unsurprisingly, I got an offer within just an hour of that post and after making the other party promise to “take care of my doggo,” Maddie was all set to move out.

At least… I’d done my best. The new resident rep who was taking Maddie in seemed to be a decent enough person.

Minutes after Maddie left, I put down the controller and sighed. I looked over at my actual dog lying on the floor of the living room and gave her a hug.

Maddie’s gone, all I have now is my real dog. Life will never be the same. Why did I ever let Maddie go? She was the heart of the island, dammit!

After another couple hours or so, I realized it was a little bit silly of me to get so emotional over a virtual video game character. And yet, the whole ordeal did hurt my genuine IRL feelings for a while.

Animal Crossing is a game where you’re meant to check in on your island periodically. It’s not really a game you can binge unless you’re farming for bugs and fish, but when you do pop in, your villagers are always there to greet you with unwavering enthusiasm. It’s mesmerizing, heartwarming, and just nice. And every now and again, some of them leave an impression, like Maddie did.

And every so often, when they do start to think about leaving, you might realize that maybe it’s time to let them go. To move on to bigger, better things outside of the tiny world they’ve known all their lives.

Look, I know this is a video game and these talking animals aren’t real. But Animal Crossing is so unbelievably good at helping you forge natural bonds with these villagers. Getting attached over time is inevitable; it’s what makes it so hard to watch them go, but sometimes, letting them go is okay.