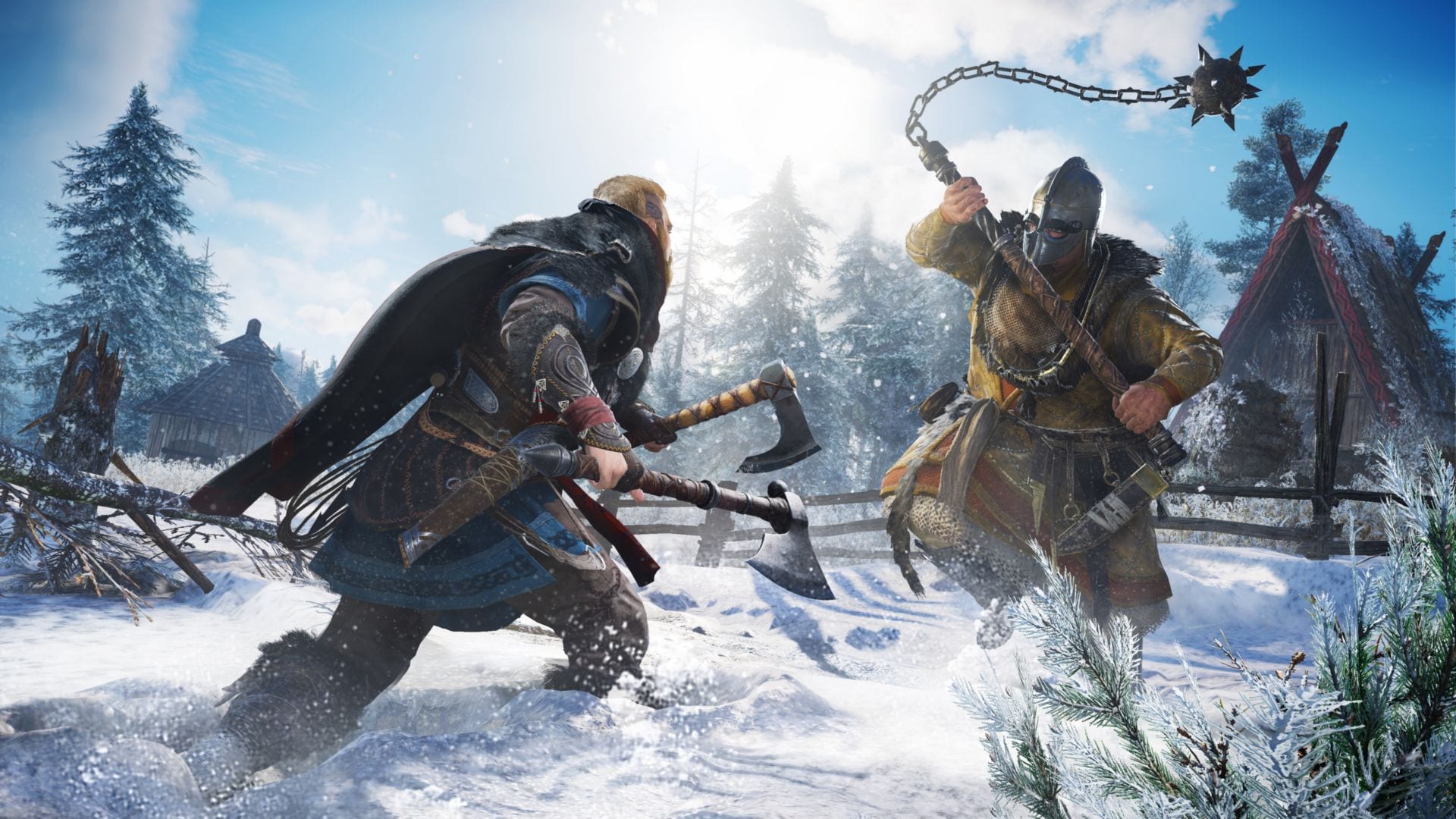 Precious few RPGs have explored the Dark Ages and even less the Viking era of British history. It’s a three-hundred or so year period absolutely rife with opportunity for storytelling, a time when a dramatic clash of cultures had a pivotal effect on the political and sociological shaping of an entire continent. Also, axes, longships, and epic battles! All good reasons to be excited about Ubisoft’s Assassin’s Creed Valhalla.

Particularly so, given that while Assassin’s Creed stories have always played fast and loose with history, Ubisoft has typically done a great job recreating the look and feel of historical settings with commendable authenticity.

So much so, in fact, that Assassin’s Creed Odyssey debuted the Discovery Tour mode in 2018, an educational tool aimed at schools and universities that offered students a digital field trip across its ancient Greek setting.

As a history buff, it’s a feature I’d hoped would become a mainstay of the franchise moving forward. Well, that is until I saw this week’s big cinematic reveal of Assassin’s Creed Valhalla, which is riddled with so many baffling historical inaccuracies that now I think Discovery Tour might be better as a one-off.

Until quite recently, history hasn’t been especially kind to Vikings. Depicted as ruthless barbarians hellbent on nothing more but murderous plunder; mainstream texts, television documentaries, and folklore have long painted the Norse in a rather narrow and inaccurate fashion.

Their exploits as explorers, navigators, traders, and settlers have always been rather breezed over. As has the more nuanced aspects of their religion and culture, which include an appreciation for art, craft, and storytelling.

It’s only in fairly recent years that a combination of more widely accessible historical information and a rising interest in the Viking age throughout pop culture has seen this misplaced image revised.

Still, their reputation as pirates and raiders is well earned. The Vikings plundered England for 70 years before they ever stayed for longer than a few days. So despite how pleasing it is that Ubisoft seems intent on portraying some of the finer aspects of Norse culture, let’s hope they don’t go too far and turn Valhalla into a fairytale.

The early signs aren’t great; the scene we’re shown of a Viking warrior allowing a woman and child to go unharmed during a village raid is far-fetched, to say the least. Even if it does simply serve to tee up the narrative, it’s painfully on the nose for my tastes.

I much preferred the next scene, which highlighted the Viking’s interest in settling on English soil for the purposes of farming. It’s absolutely true that England’s real treasure was its fertile soil and temperate climate, something that Danish and Norwegian Vikings were keen to exploit with their own permanent settlements.

Fingers crossed Ubisoft’s narrative team isn’t going for a black and white representation of Vikings and Saxons, painting one as a “goody” and the other as a “baddie.”

Let’s stick with the story’s depiction of good vs. evil and quickly touch on the early portrayal of Alfred, King of Wessex, who appears to be one of Valhalla’s main antagonists.

Of course, every story needs a bad guy, but it would be a gross butchering of historical accuracy to depict Alfred as such. Remembered as a pious and devout Christian who was fondly loved by his people, the idea of him as some evil Saxon overlord is a little silly. He was defending his land from foreign invaders, after all.

But surely this isn’t the direction Ubisoft will take the story?

In an interview with Gamespot, narrative director Darby McDevitt has explained Alfred shouldn’t be considered the central antagonist in the game.

So perhaps, again, the way he’s depicted in the trailer merely serves to present a basic good vs. bad story that’s easy to digest for now but will actually feature much more depth in the actual game? I sure hope so.

Admittedly, the first two entries on this list are speculative concerns about Valhalla’s narrative that may or may not prove an issue in the final game. I’ll repeat that there’s every chance the trailer is simplifying the story into palatable chunks before expanding into something deeper and more historically authentic in the game-proper. But uniform-wearing Saxons? Oh, dear.

During the 9th Century period of the Viking Age portrayed in Valhalla, Anglo-Saxons kingdoms such as Wessex were not able to support standing militaries, let alone highly organized ones with matching uniforms and weaponry.

That is pure fantasy and woefully inaccurate. Bizarrely so, too, for a video game series that never usually cocks this sort of stuff up.

Unfortunately, Valhalla appears to be depicting the Saxons almost like the Roman Empire, with clean red uniforms and shiny scale armor. The technology is way, way in excess of what Saxons of the 9th century would have had access to.

I can only imagine all this serves to reinforce the portrayal of the Saxons as a sort of organized evil empire denying new settlers a slice of the English pie.

Following on from the blunderous armor and clothing of the Saxons is the peculiar castle design shown in the background of the trailer’s battle scene, which is again, far, far too technologically advanced for the 9th century.

I had really hoped that I’d seen the last of this all-stone, distinctly Norman castle design in Boss Logic’s concept art, but apparently he was, in fact, basing it off what he’d seen from the game himself.

Dear me, what is Ubisoft up to here?

I remember a time when the Assassin’s Creed’s development team proudly touted its meticulous studying of Italian buildings during the production of Assassin’s Creed II as they attempted a near-perfect recreation of cities like Florence. Fast forward 11 years and apparently anything goes. What a shame.

For the record, Saxons were not great fort builders. Their “burhs” were typically small defensive structures, and only until very late in Alfred’s rule would have been made primarily of wood.

The castle we’ve seen so far in Valhalla looks 11th century at the earliest.

According to Valhalla, Vikings were apparently wild barbarians at a distinct technological disadvantage to the Saxons, with nothing but axes and courage to see them through. Wild flailing and battle tactics were the order of the day, apparently.

Ironically, the opposite was true; Vikings were anything but technologically inferior, leveraging not only their exceptional boat building skills but excellent military strategy.

Their biggest trump card was, perhaps, the infamous shield wall, a strategy that had been employed to great effect by ancient civilizations before them, like the Greeks and Romans.

The shield wall and the discipline it took to remain in the formation was certainly the Vikings’ big play over the Saxons. But Valhalla is seemingly sticking instead to a romantic notion of the Viking as a heroic individual warrior, instead.

It’s a real shame because I actually think that sort of aspect to Viking military strategy would make for an interesting and educational element to the story.

Most Vikings Weren’t Actually From Norway

While many Viking raiders and settlers certainly did come from Norway, by far and away the majority were actually Danish.

The Danes, as they were known, were the Vikings who were the bane of Anglo-Saxon kings for hundreds of years from the 8th to the 11th century, at one time ruling a huge portion of England for over fifty years in a region known as “Danelaw.”

The above image highlights the political landscape of England, 878 AD, almost the exact same time as Assassin’s Creed Valhalla.

It’s puzzling, then, that Valhalla chooses Norway as the country of origin for its Vikings. There’s nothing particularly wrong with it, but again, for a video game series that was founded on a concerted effort to recreate historical settings, it’s a little strange.

…and that’s where I’ll take things next because watching Valhalla’s trailer I couldn’t help but notice some striking similarities between the game and The History Channel’s series.

The appearance of the protagonist and his trendy hair-do, Norwegian Vikings, the very Kattegat-looking settlement, the raven and the seer during the battle (it’s likely Odin, I know, but still…) — all straight out of that popular TV show.

Even the story beats of Vikings wanting to settle in England rather than raid and having to battle against King Alfred is the very same.

In a 300-year period, Ubisoft went for the exact same storyline. Coincidence? I think not.

I suppose it makes sense. Ever since Origins, Assassin’s Creed games have felt like a mash-up of every AAA, in-vogue video game trend. Why not include television series as well, right?

Predictably, the decision to include a female protagonist as a playable option in Assassin’s Creed Valhalla has caused a stir.

On the one side are the disgruntled folk, who insist that historical evidence for female warriors known as shieldmaidens is highly contested. On the other, those who are (rightly) in favor of their inclusion are upset that Ubisoft strangely opted not to showcase their presence in the game’s first cinematic trailer.

Let’s clear one thing up straight away: there’s absolutely enough evidence to warrant including shieldmaidens in Valhalla, and those who disagree are their sexism behind history debate they probably don’t actually care about.

Female warriors are not only celebrated in Viking folklore and lamented in the written history of their enemies, but they’ve also been uncovered with archeological evidence.

Ubisoft has responded to criticism of its decision not to spotlight shieldmaiden’s in the cinematic trailer by suggesting that, as in previous Assassin’s Creed games, subsequent promotional material will shift perspectives. So, let’s look forward to that and stop arguing.