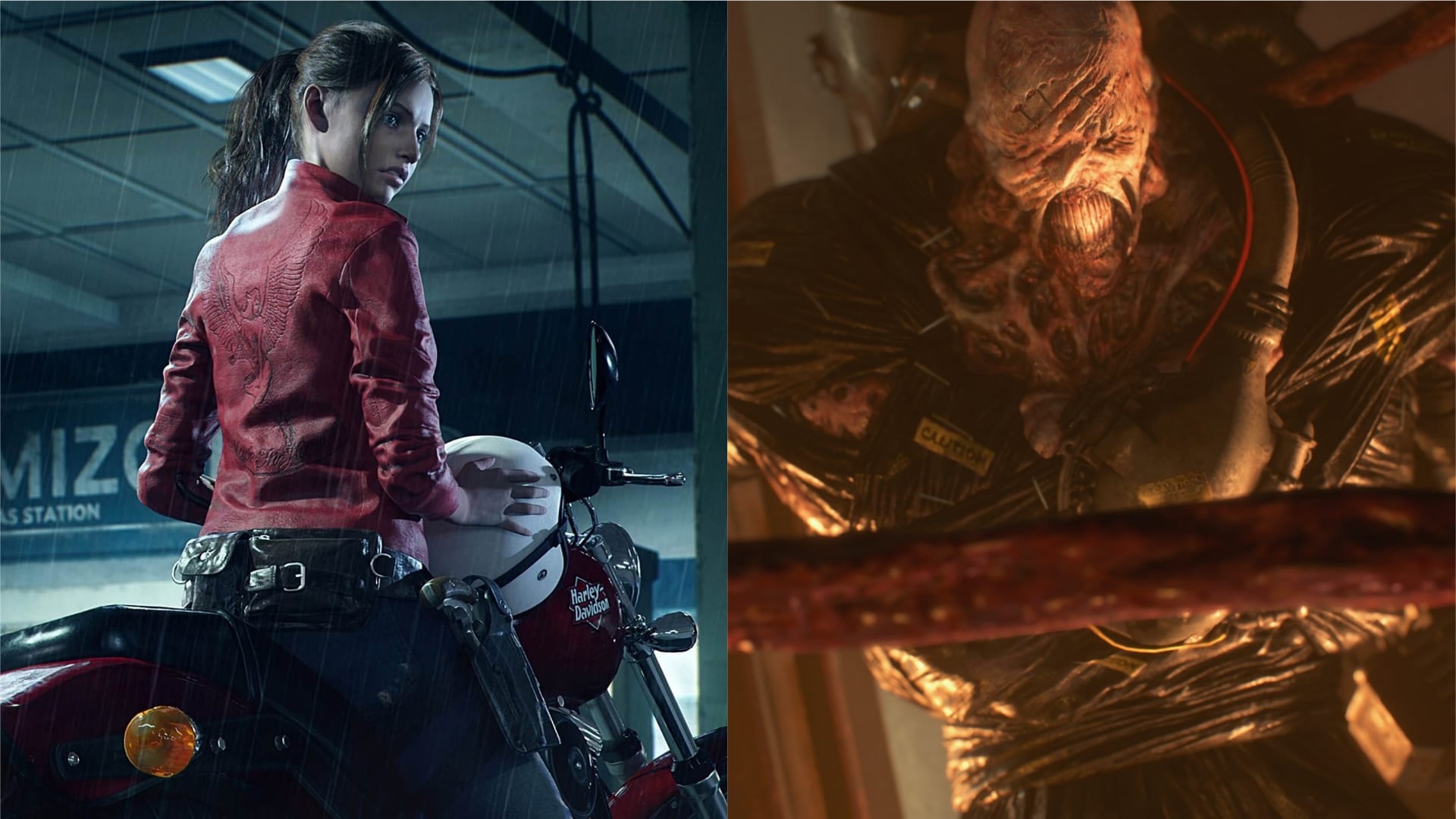 Let’s take a look at both games and compare them in a few categories (story and characters, gameplay, and replay value) before deciding which game is the better remake.

Resident Evil 2 centers around Leon, the rookie cop who runs headfirst into a zombie apocalypse his first day on the job, and Claire the ridiculously capable college student who comes to Raccoon City in search of her brother. Both characters are immediately charming and charismatic as soon as you lay eyes on them and get to know them better throughout the course of the story.

Leon might feel a little two-dimensional as the goody two-shoes cop, but his unrelenting earnestness and desire to do right by everyone is endearing. It certainly helps that he’s always full of quippy one-liners and witty snap backs as well.

Claire is the responsible, nurturing figure who can’t help but feel protective over the people around her who need help, and that’s made evident through her interactions with Sherry. She’s kind and caring, and also a total badass when it comes to zombie-slaying.

Aside from these two, we’ve also got Sherry and Ada as capable support characters who have become so much better developed and well fleshed out since their PS1 days. We’ve got Annette and William Birkin who were nothing more than caricature villains in the original game, and they’re actual compelling characters in the Resident Evil 2 remake.

The way the Resident Evil 2 story slowly unravels from the police station to the sewers and orphanage, to the NEST lab, is utterly compelling. Our heroes are so easy to root for, you can’t help but be gripped every step of the way.

Resident Evil 3 puts us in the shoes of series icon Jill Valentine, and we also get to revisit Raccoon City. This time, the story centers around her escape from her story and Nemesis, who chases her relentlessly throughout the entire game.

Aside from just escaping, though, Jill also finds herself caught up with some Umbrella soldiers, including the charming Carlos and the nefarious Nikolai. Jill and Carlos have great chemistry in RE3, and watching their flirty interactions is also hilarious and fun.

However, that’s about as good as it gets. Nikolai is an incredibly bland and boring villain; he was forgettable in the original game, and nothing really changes in the remake either. The story, while pretty standalone for the most part, is also somewhat contingent on you having played the first game and also having a decent understanding of the consequences of those events.

Resident Evil 3’s story is fine, but its supporting characters are just okay, and nowhere near as memorable as Resi 2’s Ada Wong. We’ll put it this way: there’s a reason why the original Resident Evil 2 is widely regarded as the best game in the series, and why Resi 3 is often seen as the least popular sibling in the original trilogy.

For the most part, the gameplay is the exact same in both Resident Evil 2 and 3. These games are third-person, over-the-shoulder shooters, and you’ll obtain a variety of weapons to help you kill a ton of zombies and other Umbrella monsters along the way.

In addition to that, you’ll be exploring large areas, backtracking and solving puzzles, and carrying key items around and using them in the right place to progress. There are a couple of big differences, though. Resident Evil 2 is a lot more atmospheric and puzzle-focused, while Resident Evil 3 feels more like an action game.

Resident Evil 2’s first half takes place in the RPD, where you’ll be running back and forth between various rooms, trying to figure out which puzzle piece goes where. Resident Evil 3 is a constant war between Jill and Nemesis, as he follows you around Raccoon City, and you’ll need to figure out how to fend him off while trying to get to your destination.

Resident Evil 3 also introduces a quickstep mechanic, allowing you to dodge enemies a little more easily. If you pull off a perfect dodge at the right time, time will slow down a little, and you can fire off a few shots at your foes. It becomes critical on higher difficulty settings, and trying to pull off perfect dodges becomes quite fun.

Boss fights are also way better in Resident Evil 3. For a series with boss fights that have always been about shooting an enemy in the big glowing red spot until it dies, saying that the bosses are better here doesn’t really account for much, but it’s definitely a big step up. The fights with Nemesis are exciting because he has so many moves to watch out for, and dodging him becomes a key part of survival.

Winner: Resident Evil 3. It’s a very close one here, as deciding which game’s better really depends on whether you’d prefer puzzles or action in your Resident Evil games, but we have to give the edge to Resi 3.

Resident Evil games have always been on the shorter side, especially the original trilogy, and the two remakes are also definitely short. However, the bulk of the fun of the Resi experience comes from replaying these games over and over again, trying to unlock everything, playing the higher difficulty levels, and beating the game as efficiently and quickly as possible.

Both RE2 and RE3 are fantastic speed games, but in different ways.

Resident Evil 2 perfected the whole speed formula by offering both variety in content, and S+ ranks for players who wanted to go above and beyond, and really give themselves a challenge. With four different campaign routes, players could challenge themselves to get the S+ ranks with all four by playing on Hardcore, under two hours, and with only three saves and no bonus items. It’s harder than you might think, but it offers a very fun challenge for players who wanted to play as fast as possible.

Not only that, there were plenty of other speed opportunities in the extra modes that Resident Evil 2 offered: Fourth Survivor and Tofu Survivor. These were way more challenging, and you could even unlock different Tofus as you get better at that mode. Plenty of reasons to keep going back and replaying these modes over and over again.

Resident Evil 3 falls a little short in that regard. With only one campaign, there isn’t a whole lot of content to go through in the first place. Because Resi 3 doesn’t have different routes like 2 does, there’s not a lot of variation in gameplay either, especially since the remake doesn’t feature live selection like in the original game.

Past that, there are no additional modes to challenge yourself with. Yes, we know Resident Evil Resistance is a thing, but that’s not really the kind of additional content we’re looking for in this category.

Resi 3 does offer a couple of other things, though: two more difficulty levels with Nightmare and Inferno, as well as a shop where you can purchase bonus items with points you’ve accumulated. Here’s the thing: there’s very little incentive to buy all the items in the shop if you’re not really motivated to replay the game in the first place.

In addition to that, while the two extra difficulty levels are incredibly challenging, the S rank requirements for them are also fairly lenient. Aside from the strict time limit, players are free to use bonus items from the shop to make them extremely easy, and that wouldn’t affect their ranks at all.

There’s no S+ rank to differentiate the players who did and did not use bonus items, and that’s a huge step back from how Resident Evil 2 handled it.

Even back in the 90s, Resident Evil 2 was largely seen as the definitive RE game, and nothing else came close, except for maybe the original game. Resident Evil 3 definitely has its merits, but we can’t help but feel that it’s just a little lackluster when standing next to its much more accomplished sibling.