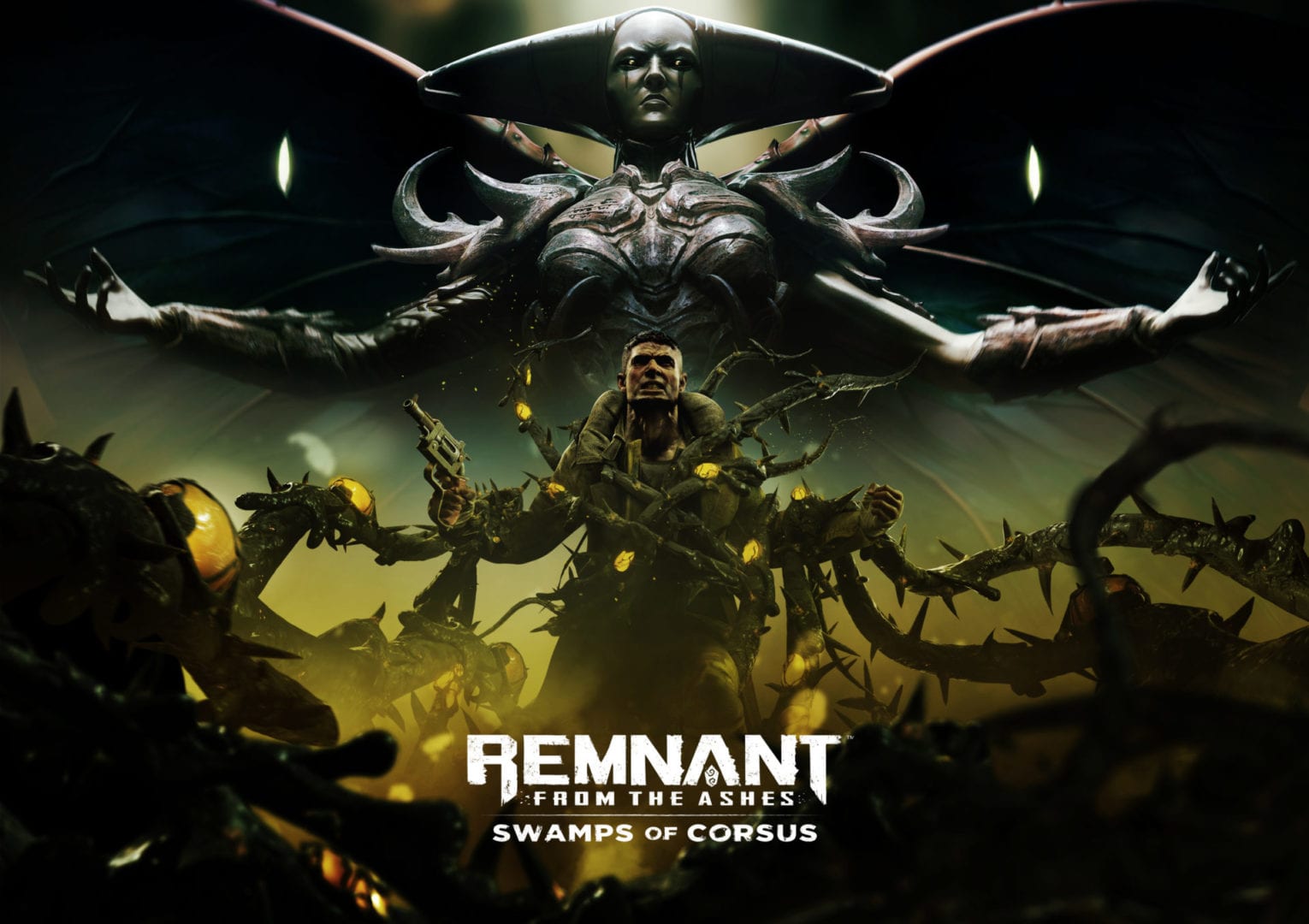 The brand new DLC for Remnant: From the Ashes launches April 28. Back at Pax East 2020, we got to go hands-on with the new survival mode. This is, however, just one part of the new DLC titled Swamps of Corsus. The survival mode ditches the RPG formula to give you a completely different experience.

Swamps of Corsus’s survival mode is a rogue-like adventure that randomizes every time you play it. My first run through the game, I started out with nothing but a thousand scrap to purchase an item or two before diving in.

At the base camp where you start each run, there are a few obelisks that sell items, armor, and weapons for the player, but scrap is limited, so you won’t be able to buy everything available.

I grabbed a hunting rifle and a trench coat and went into the first level. I was instantly transported to the dusty deserts of Rhom from the main campaign. The geometry and layout of the level were familiar, but everything on the map, including enemy spawns and treasure chests, were completely randomized.

As I worked my way through the dilapidated buildings and cracked streets, I was barely scraping by. The enemies were ruthless and aggressive, rushing me in swarms, leaping out around corners, throwing everything they had at me.

Ammo was scarce, but it never felt unfair. Instead of having to rely on my abilities from the RPG, it became much more about reading each encounter and being tactical, trying to pick enemies off from a distance or merely trying to run past them to find the end of the level.

I finally made it to the boss at the end of the level, which was another boss from the main campaign, and was struck down due to lack of ammo and health going in.

Suddenly it spit me back out at the base camp, all my gear and treasure I had collected was gone, and it was time for me to try all over again.

On my second run, the shops had changed their inventory and prices, so I stepped out of my comfort zone and picked up a shotgun at the expense of being able to afford armor or upgrades. Small choices like that force you to think about Remnant in an entirely new light.

I hopped into the level, and this time I was transported to the vibrant green world of Yaesha, one of the end game locations from the campaign. It was then that level designer Anthony Narcott told me they designed survival mode with levels from the campaign so new players could experience the game without having to commit to a 30-hour campaign.

It was the perfect way to try out the game piece-meal and still see a lot of what Remnant: From the Ashes offers. It also provides veteran players with a whole new way to engage with the game.

Remnant’s main campaign is full of procedurally generated content but the biggest difference in survival mode is the sheer unpredictability of the variables. Not knowing what weapons and armor you’ll have access to, what boss you’re going to encounter at the end of the level, and no idea if the build you’re trying to create will synergize with what’s to come. It’s a fresh take on an already somewhaat unpredictable game.

Survival mode will net players a few new weapons and pieces of armor they can use in the main game. I didn’t get to use any new weapons or armor due to the randomized elements of survival mode, but the challenge it provided was more than enough to satisfy me.

After each subsequent failed run, I was ready to hop back in, the levels themselves don’t take more than 10 to 15 minutes to get through so it was great to get in a few rounds quickly. On one of my later attempts through Yaesha I managed to defeat the boss and was rewarded with a unique relic for my weapon.

Players who complete a boss battle get sent back to the base camp where they can revisit the vendors for new items and upgrades before continuing on their run. All of this is in service of gaining a new crystal currency that will unlock cosmetics and upgrades in the main campaign.

Of course, this is just one part of the Swamps of Corsus DLC, which will add more areas to the main campaign as well when it launches on April 28 2020 on PC and a later date for consoles. Swamps of Corsus will cost $9.99.

You can read our review of Remnant: From the Ashes here.