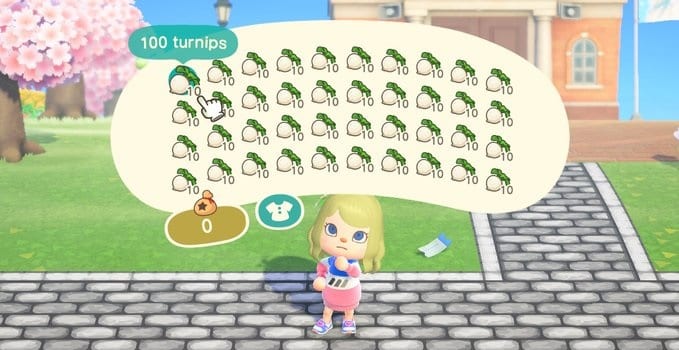 If you play Animal Crossing: New Horizons, you probably have at least heard about buying and selling turnips in order to make a profit. Daisy Mae sells the turnips on Sunday mornings, and then you have the week to sell them to the Nooklings, hopefully making more bells than you spent.

It’s a bit risky, though, since the turnip prices on your own island might not yield a profit during the week. That’s why generous members of the Animal Crossing community have been opening the gates to their islands when their turnip prices are high.

Visiting someone’s island to sell turnips (or for any other reason) can be essential to making a profit. But if guests aren’t respectful, it could turn into a disaster for the host and make them rethink inviting people in the future.

Here are some tips for having good etiquette when visiting another player’s island to sell turnips.

When someone invites others, especially strangers, to their island to sell turnips, they expect that the guest is selling at Nook’s Cranny and not doing anything else.

If guests start wandering around the island without asking, it can make the host nervous about what they might be up to. They might want you to stay within their sight.

If you’re not sure where Nook’s Cranny is located on someone’s island, start by checking the map and heading directly towards it. This doesn’t mean you can’t explore the island later; just be sure to ask the host if it’s okay so they know where you are going.

Stay on Paths and Don’t Run Through Flower Patches

As you are headed straight for Nook’s Cranny, it’s common decency to stay on any paths that have been built. Some islands will have paths leading directly to the store, so stay on them.

Even if there isn’t a path to stay on, make sure you don’t run through patches of flowers. Running through that will break the petals off and destroy the aesthetic and potentially the host’s efforts at growing hybrids. If you absolutely must travel through flowers to get to the store, be sure to walk, not run.

It can be disheartening when someone opens their gates for visitors only for their hard work to be destroyed in a matter of seconds, so keep this etiquette in mind when navigating around the island.

Every day, there will be a selection of items in Nook’s Cranny that only one player can purchase. After they are purchased, the spot will be replaced with a ‘sold’ sign.

These items are located in the back of Nook’s Cranny. Do not buy these items without permission! The host may not have gotten around to buying them yet, and once they are sold to someone, they are gone.

If you see a one-purchase item that you absolutely love, just ask the host if you can catalog it. This means the host will purchase it, let you pick it up, and then you give it back. This will make the item purchasable from the Nook Stop on your own island, and the host gets to keep the original.

Ask Before Picking Fruit and Flowers

When visiting someone’s island, you may see rare fruit trees or flowers that you don’t have yet. A lot of people think it’s totally okay to pick as many as they want since they grow back after a few days. It is NOT okay!

It’s possible that the fruit trees you see aren’t the person’s native fruit; perhaps they are growing foreign fruit trees to sell for a profit. Even if it is their native fruit, maybe they’ve been waiting days for them to grow in order to repopulate their trees.

As for the flowers, even though they do grow back, you could be undoing days of work trying to create rare hybrids when you pick them. This can be incredibly frustrating to have to do over again. The host might be okay with it, but it’s a good idea to ask first just to make sure.

This is a simple one, but it’s pretty important. Unless stated otherwise, when a player invites you to their island via a dodo code, they are inviting only you. Not your best friend, not your Discord group of fifty people. Just you.

If a dodo code gets out to the public, the host might become overwhelmed with visitors who they don’t know. And when a new player tries to enter the island, everyone who is already there must sit through the entrance cutscene, which can interfere with them selling their turnips.

Maybe I sound like a broken record here, but it’s absolutely essential that you simply ask the host before inviting any other guests. Many will be okay with it, but it’s polite to get their permission first.

Use the Airport to Leave the Island

It might sound obvious, but the safest way to leave the island when you are finished is through the airport. Absolutely do not disconnect and go offline to leave; this can result in a connection error for every player, which can cause you and others to lose progress and the bells you just earned from selling.

On a related note, if you are on someone’s island and you see a message pop up telling you to close dialogue windows because someone is trying to leave, close those windows! If you don’t, it will time out and cause a connection error, kicking you and everyone else off of the island.

It’s a huge pain for everyone.

Tips aren’t required when selling turnips on someone’s island (though many people request them); however, it is a nice gesture. After all, they’re taking the time to let you visit for nobody’s benefit but your own.

Everyone’s idea of a fair tip is different, but it’s pretty common to drop a bag of 99,000 bells for the host after selling an inventory full of turnips. If you make multiple trips, 99,000 bells each time is a kind tip to leave.

Of course, everyone visiting may be making a different profit, so there’s a wide range of what is considered acceptable. 10% of whatever you make is a commonly agreed-on amount; if you didn’t make a huge profit, consider leaving something else valuable such as Nook Mile Tickets instead.

Don’t stress out if you can’t afford to leave a big tip. A kind host won’t care if you can’t leave anything, but make sure to at least thank them for taking the time to open their island for you.

Return the Favor by Opening Your Own Island

One week you may be visiting someone’s island to sell turnips. Perhaps the next week, the selling price at your own island will be high.

Return the favor by opening the gates to your island when your Nook’s Cranny store is buying turnips for a profitable price. We’re all in this together to help each other make bells each week from the Stalk Market.

Even if your island doesn’t have high turnip prices, it’s good etiquette to invite the people who have helped you to visit your own island sometime. Maybe they want to check out how you’ve decorated, buy from your stores, or just say hello to your villagers.

As long as you’ve respected the rules on someone’s island by following the proper etiquette, they should be happy to do the same when visiting yours.