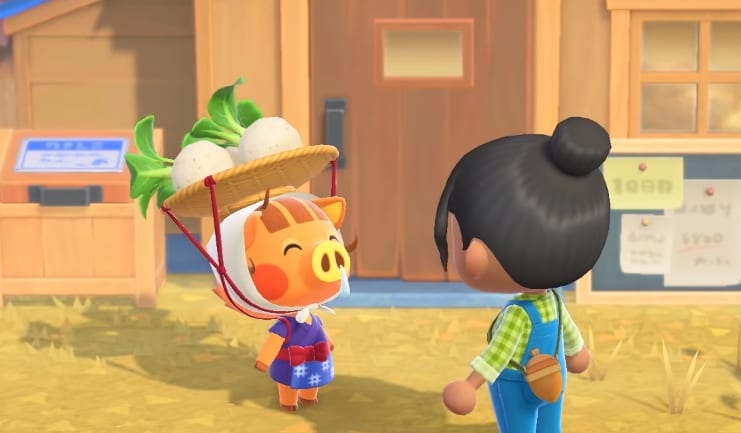 After saving up tons of bells last week, I finally had enough to feel comfortable dropping one million on turnips. Come Sunday I would be taking my biggest risk so far in New Horizons when a perpetually sniffly boar would let me try my hand at playing the stalk market.

When the turnip seller, Daisy Mae, comes to town in Animal Crossing: New Horizons, it’s like a little weekly New Year’s Day for those of us who are into the stalk market. Even if you had a bad week, it’s a brand new opportunity to try something different that could turn your fortunes around.

It’s exciting, scary and joyous all at the same time.

Everyone shares their turnip prices so we can all get the best deals and then storing them is a whole ordeal on its own. I’ve seen people make entire rooms, massive fenced gardens and even paths made of turnips.

Once Sunday passes and the weekdays begin, then reality starts to set in. Yes, you actually just spent hundreds of thousands or even millions of bells on damn turnips so you better flip them for a profit.

Our general chat in the Twinfinite Slack is essentially a daily stalk trading floor. Most of the time we’ll get double-digit numbers and the occasional profitable three-digit number. One day there was a mad rush to get to an island that was buying turnips for 751 bells.

Some people didn’t get in, but a couple of days later we found another island that had a high buying price. Even though most of us didn’t have more turnips to sell, we were still on the lookout to help out our colleagues.

That’s the selfless spirit that brings me so much joy when I think about the Animal Crossing community. Yet, not everyone is lucky enough to have direct contact with a big group of people who are massively into the stalk market.

Fortunately, this is where the generosity and general friendliness of the Animal Crossing community shine through. If you look throughout Twitter, Reddit, Facebook and just about any other platform for social interaction, you’ll likely find people talking about their turnip prices in New Horizons.

Everyone is in the same boat when it comes to the possibility of losing tons of money on a little white root vegetable. It’s quite the motivator for sellers to search out buyers and vice versa.

Once these interactions begin, the generosity of the community starts to become apparent.

I mostly use Twitter to find turnip sellers when my prices are abysmally bad. Two days ago I found an incredibly hospitable person on the social media site. He let me hop on his island multiple times without hassling me for a tip or any gifts.

I complimented the altar of what I presumed was his cat and left a one million bell tip that enabled him to pay off his basement loan. Then we celebrated while he played the pan flute and I clapped. When I returned home I still had enough bells to pay off my own basement loan.

Just a single DM on Twitter and we both instantly became Bellionaires. It can be scary to reach out sometimes, but people are putting their prices out there because they want to welcome you in.

More often than not the people in this community will show you fantastic hospitality.

Still, there are two ways to respond to this situation and that’s with a welcoming attitude or with a cut-throat mindset. You have to be willing to put in the time to search our buyers or sellers, but you’ll mostly run into people who just want to help out.

I always try to bring along a reasonable amount of bells (around 10 percent) or items as a tip. Very rarely do I actually encounter someone with truly ludicrous demands. But, if you look for them, you can find people trying to swindle visitors by charging 500k per trip to their island.

Those people are clearly outliers and I’ve only seen those kinds of laughable offers on Turnip Exchange. At the same time, that site is also filled with tons of people who just want to help you get rich.

I haven’t been lucky enough to have a high price in New Horizons yet. However, New Leaf was very good to me when it came to the stalk market. Complete strangers left me hundreds of thousands of bells just because I let them come to my town and didn’t impose a tip on them.

Even though the base goal is about becoming rich, you get to enjoy a new island, help pay off other player’s loans and maybe something in their town will inspire you to make your place even better.

It’s truly the most enriching experience you can have while playing Animal Crossing: New Horizons.

Without the stalk market in Animal Crossing, there wouldn’t be a reason to interact with other players as much as we do now. This useless tuber gathers the community together and brings out the absolute best in almost everyone.