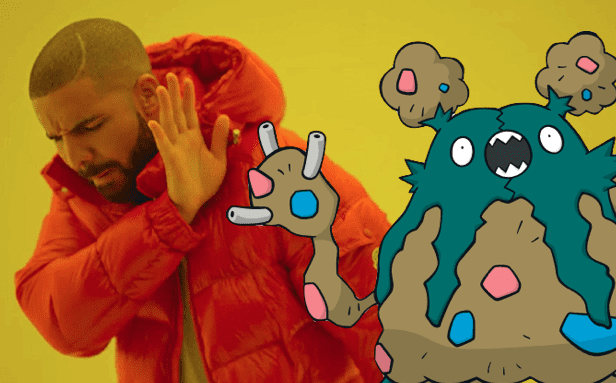 If you missed the memo, Pokemon Mystery Dungeon DX released on the Switch today.

The premise involves you, the enigmatic protagonist, being transformed into a Pokemon. How did this happen? Why did this happen? That’s for you to work out, primarily by traversing through dungeons and laying waste to the hapless Pidgey and Weedle dwelling within.

To decide which Pokemon you’ve been turned into, the game starts with a short personality test. After answering these questions, it’s determined exactly who you should be (though you can just as easily say ‘Nah screw that’ and demand the one you want).

The available selections are your typical gallery of popular Pokemon, plus some wildcards like Cubone or Machop. And obviously, this kind of transmogrification ain’t so bad… but what if you weren’t so lucky?

Here’s a gathering of 10 Pokemon you would hate to wake up as one morning after a particularly wild bender.

Being cute is of utmost importance in the world of Pokemon. It’s pretty much the easiest way to become popular, and if you’re not pretty enough, Mr. Bonding will refuse to bestow his O-Powers upon you. My goodness, that sentence makes me feel icky.

Your only other hope for garnering fans is by being cool; hence why Charizard is always at the forefront of every new game’s marketing. Who doesn’t love a fire-breathing dragon (besides Venusaur and Blastoise fans, anti-gen 1 crusaders and Stealth Rock)?

But some Pokemon really miss the mark. Diggersby looks like a dirty rabbit construction worker, complete with unkempt facial hair and a perpetual scowl. Its ears operate as a second pair of arms, which is kinda neat, but is that really going to be impressing anyone at parties? Not even Claude from Fire Emblem: Three Houses will be your friend!

Diggersby probably smells terrible, too, like armpits and cheap cigars. Just throwing that out there for you.

Just imagine it. You could be the nicest person in the world, have lots of friends, maybe even donate to one of those charities that looks after bonobos out in the Congo. But if you’re Garbodor, you’re trash. Always. It’s just who you are, it’s an ingrained part of your very being.

This thug is constantly pointed to as being the low point of Pokemon designs, and it’s hard to imagine it being anyone’s favorite. Its previous stage, Trubbish, is at least kind of cute if you look at it cross-eyed, but Garbodor has no redeeming features short of a Gigantamax form that nobody asked for.

Plus, you have a natural rival in Muk, who hates you for everything you represent and may or may not be considering devouring you. Hope you like vore!

On the surface, turning into a Spoink may not seem like such a raw deal. It’s pretty loveable, and once it evolves into Grumpig, it grows itself a pair of legs with which to run, to dance, and to grasp at the throat of its oppressors.

However, for the 31 levels before you’ve evolved, you’re condemned to an agonizing life of perpetual motion. If Spoink stops bouncing on its tail, its heart will stop and it will die. How would you sleep? How would you chill out after a hard day’s work? What about using the bathroom, imagine what kind of a terrible mess that would make!

Sure, you might think that you’ll be able to last long enough for that sweet evolution, but that requires a lot of battling — and what happens when you faint? That’s right, you stop bouncing and your ticker is toast.

With such a steep risk, you’d basically always have to have a friend around to either revive you, or use your unconscious body as a makeshift basketball. No privacy, no dignity… such is the plight of the Spoink.

Combee is the epitome of mediocrity.

It just floats around, gathering honey, grinning at you vacuously from its three faces. There’s not much to celebrate here, but female Combee at least gets to look forward to evolving into Vespiquen. She’s basically a big angry bee that rules all the bees while using bees to fend off her foes, who are sometimes also bees. She’s a solid B+.

Males have nothing to aspire towards.

They’re incapable of evolving, and will remain forever trapped in this form. Have you ever felt a lingering feeling of hopelessness? Now that you’re a male Combee, that’s all you will ever know. Your only purpose on this earth is to serve your queen, and as cheap EXP fodder in the Wild Area.

In a competitive context, the feeble Smeargle is actually quite appealing. Its limitless versatility allows it to operate in a variety of roles, with access to awesome set-up moves like Sticky Web or Geomancy.

Actually being a Smeargle? Different story. Everyone would want to hang out with you, but it would only ever be for their own benefit. This Pokemon is always the bridesmaid and never the bride, watching on as its colleagues soak in the glory of a victory that it facilitated.

You’re basically Tetsuya Kuroko; an anonymous hero whose best quality is your ability to make others look good. There’s a reason why artists are always starving, after all.

Koffing has a few things it’s famous for, and none of them are particularly aspirational.

It’s known for being riddled with toxic gases, and getting its ass kicked by Pikachu on a daily basis. Taking a quick look at any region’s Pokedex, however, will reveal that its most commonly discussed trait is its tendency to explode without warning.

Self-destruction is a prevalent element of the Pokemon franchise, but it’s rarely explored exactly what it entails. We know that it causes its user to faint instantly, and that it has immense power that is enough to fell opponents twice its size (except ghost-types who just shrug and go ‘neat trick, bro’).

This rarely seen Sugimori artwork paints a much more dire picture than that. Look at the dismay on Koffing’s rapidly dismantling face; it is in the process of its own painful demise, and it’s powerless to stop it. Is this the existence you want? Constant fear of combustion? Unless you like to live dangerously, the world of a Koffing is just far too stressful to handle.

It’s easy to like Parasect. It has a charming, interesting design, and some neat tricks that it can pull out in battle like Spore. People may enjoy your company, however you would never actually be aware of it, because the parasitic mushroom on your noggin has completely taken over your body and mind.

Parasect is nothing but a barely living host for the fungus, and if someone tried to remove it from you, they’d end up killing you in the process. It kind of makes you wonder how exactly an entire species has become infected with this hideous affliction — and straight up, who’s planting all these seeds in Bulbasaur’s back at birth? — and there is no known cure short of gratuitous batches of antimycotic cream.

Not to mention, that 4x weakness to fire isn’t spectacular either. Even a child’s birthday cake would be absolutely terrifying.

There are lots of Ghost-type Pokemon out there (several of whom appeared in our spooky Halloween list), but there’s something unsettling about seeing the sweet, grinning Corsola wiped out before our very eyes.

If you’re a Corsola from Galar, you’re effectively a dead version of another Pokemon, and looking upon them would fill you with such intense emotions. Anger, sadness, longing for a life that should have been yours… Galarian Corsola just look like they’re constantly depressed.

You could take solace in the notion that you alone can evolve into Cursola, complete with protective ectoplasm that makes you look like a morbid Christmas tree, but it comes at the cost of your competitive viability. You just can’t win… sometimes literally.

For starters, it would absolutely suck to be transformed into a fish.

Unless you happened to be in a body of water at the time, you’re not long for this world, and the odds of this aren’t that great. If you were at the gym, or having brunch with a friend, or locked away in some kind of kinky dungeon (covering all bases here), you’d dehydrate within moments.

Second, it’s common knowledge that Wishiwashi, when not schooled, has the lowest base stat total of any Pokemon ever made. Lower than Magikarp. Lower than Caterpie. Lower even than Sunkern, who held the mantle of misery for multiple generations.

But lastly, according to this chart on Bulbapedia, Wishiwashi is tied with Shellder for the most Pokedex mentions of being prey to another monster. Weak and delicious? That’s a dreadful combination!

Look, Mr. Mime has always been creepy, and that truth only increased tenfold when it appeared in the Detective Pikachu movie, complete with realistic textures. Ever wanted to stroke Mr. Mime’s skin?

The harsh reality is that, should you become one yourself, you only have one career path ahead of you. None of them are called Dr. Mime, you see, because performance art is embedded within their eldritch flesh.

If the point of Pokemon Mystery Dungeon is to assemble enough pals to start up your own rescue team, being Mr. Mime would equate to an automatic game over, because ain’t nobody going into a dark dungeon alone with you.

Are you hyped for Pokemon Mystery Dungeon? Make sure to check out the promotional commercials, which are suspiciously absent of any of the above Pokemon.