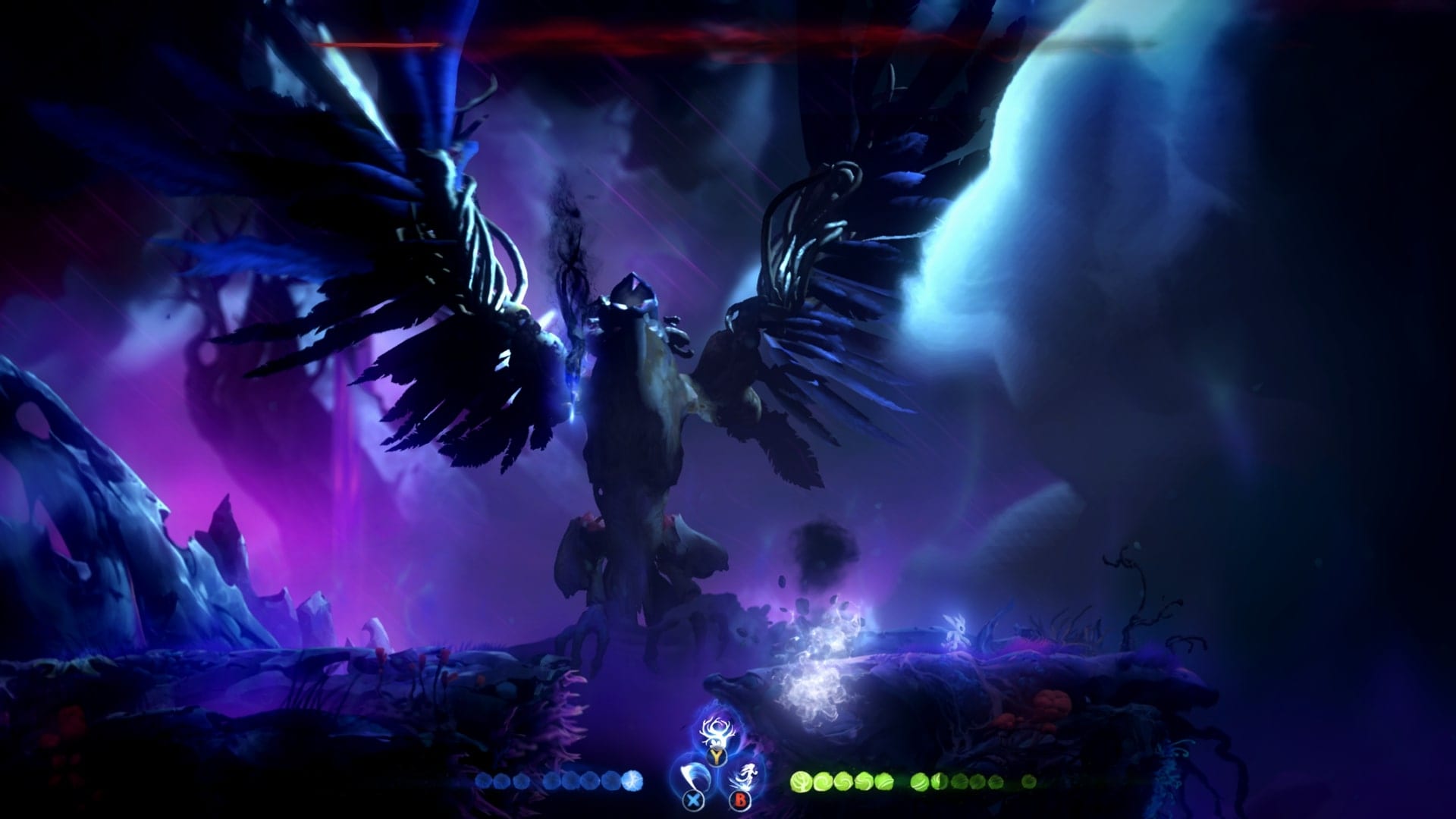 So you’ve reached what appears to be the end of your quest to save Nibel from the decay. There’s only one thing left to do, and that’s take care of Ori and the Will of the Wisps‘ final boss battle, Shriek.

Shriek is the giant bird-like creature that’s been harassing Ori and co. since the beginning of the game. It’s an incredibly tough boss battle, but we’re here to talk you through each of this final boss battle’s three phases so you can come out on top.

As we noted above, there are three phases to this boss fight, each one introducing new attacks that you’ll need to be aware of. Before we dive into that, we thought we’d share our Spirit Shard setup for this fight, as it requires a bit of juggling around.

For Shriek, we always kept Spirit Edge (your melee attack) and Propel assigned to X and B respectively. We’d switch out Regenerate, which heals part of your health bar for some Energy, for Light Burst, which is your projectile attack that can deal severe damage. Switch between these as and when you need to heal.

With your Spirit Shards set up, let’s take on Shriek.

In this first phase, Shriek is fairly easy to read. A white wind-like pattern will appear on the ground and the bird will crash down from the air on this spot. Avoid this area and you’ll avoid taking damage. Stay fairly close, though, as afterwards he’ll sit on the ground for a while.

After Shriek does its landing attack, it’ll look to one side and… shriek, dealing damage if you get caught in the soundwaves. As soon as you see Shriek turn its head one way, go to the other, Propel upwards and deal damage while you’ve got a good amount of time with Shriek looking the other way.

Continue to use Propel to fire yourself up towards Shriek’s head and slash away to deal damage. Your Light Burst attack can also be very useful to use whenever you’ve got energy to chip away at his massive health bar that little bit faster.

Shriek also has a projectile attack that you can sling back at him. He’ll either do this from the very center of the arena, or from one of the sides. Make sure to aim for its head when slinging them back, as this is the only area you can deal damage to it.

Finally, Shriek will also begin using a swoop attack. He’ll come normally along the very bottom of the screen, along the surface of the platform you’re standing on, trying to deal damage. A black wind-like pattern appears where he’s going to swoop through, so be sure to use your Propel, double jump, and dash to avoid this.

After a you’ve hacked away at Shriek’s health enough, he’ll destroy the arena you’re currently in and force you to do a bit of platforming to your next one. This is very easy, though, so you shouldn’t have any trouble.

Arriving at the new area, Shriek has a couple of new tricks up his sleeve. There’s a new projectile attack in this phase that sees the giant bird sit behind the platform Ori is standing on and calling down a rain of projectiles.

You can use your Sling ability to send them in other directions, but we found it best to just try and avoid them as they’re falling down.

Shriek will also start utilizing his swoop attack in different directions. Normally after peforming this new raining projectiles attack in this phase, he’ll swoop straight at the platform from behind. To avoid this, as soon as you see the pattern appearing, use Propel to send yourself flying into the air to avoid it.

It may also swoop in diagonally, trying to catch you off. Just keep an eye out for the black whooshing wind pattern and you should be safe.

Finally, Shriek introduces another projectile attack where he’ll hover at the side of the arena and pepper you with white projectiles. Ignore the projectiles and instead Propel up and dash over to its face. You can get a good 5-10 strikes in with your Spirit Edge attack this way.

One thing to keep in mind here is that there’s an Energy shard that will keep respawning that you can use to top up your Energy levels. Be sure to hit this whenever it respawns so you can keep your health topped up. You’ll need it for phase three.

After you’ve hacked away at its health a little more, Shriek will eventually begin picking away at the arena, making it crumble off until there’s essentially no platform left. It’s time for phase three.

By this point, Shriek is really pissed. He wipes out the entire platform you were battling it out on, and now you’ve got to use the permanently raining projectiles to keep yourself suspended in mid-air. Remember to use your Propel Spirit Shard to give yourself an added boost if you mistime or misjudge a sling.

Of course, while you’re trying to keep yourself alive, Shriek’s peppering you with projectiles and swooping in. You’ll need to dash and use Propel whenever you see his swoop attack tell appear on-screen to avoid it. When he sits at the side, now’s your chance to really deal some damage.

Shriek will begin hurling projectiles at you again. Use your Sling ability to fire them back, and use your Light Burst attack if you’ve got enough energy to chip away at it even faster.

Eventually, you’ll drop Shrieks’ health to zero and you’ll have beaten Ori and the Will of the Wisps’ final boss battle. For more tips, tricks, and guides, be sure to search for Twinfinite, or check out more of our posts below.

Related Posts
Comments
Continue Reading
Related Topics:final boss battle, Guide, how to beat, Ori and the Will of the Wisps, Shriek