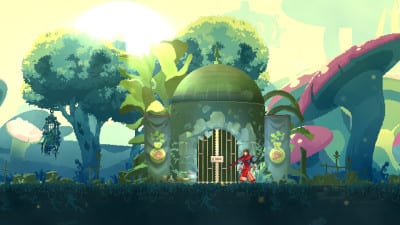 The Bad Seed is the first official paid DLC released for Dead Cells, and it comes packed with two new early game biomes, and a new boss fight to boot. While that doesn’t sound like a lot, it’s also worth noting that the DLC comes with new blueprints for you to unlock, which only adds to the insane variety that this game has been building on. Here’s how to start Dead Cells’ Bad Seed DLC.

How to Start the Bad Seed DLC in Dead Cells

Because the two new biomes can be accessed in the early game, you won’t have to wait too long before you get to check out the new content.

First things first, make sure you’ve actually downloaded and installed the Bad Seed DLC. You can confirm this by checking the Downloadable Content option in the main menu, which shows you which DLC packs you have installed in your game.

Start a new run, and go through the Prison Depths area as per normal. The two regular exits are still in place here, with one exit taking you to the Promenade of the Condemned, and the other taking you to the Toxic Sewers.

You’ll need to have the Vine rune on you to access the Toxic Sewers exit, so head in that direction and activate the vine. On your way towards the Toxic Sewers, you will come across a corpse with a note on him, as well as the Dilapidated Arboretum Key. Read the note, grab the key, and continue on your way.

You’ll eventually find a locked door that leads to the Arboretum exit, so just use the key to open it up, and you’ll be off to the new biomes. The Dilapidated Arboretum only has one exit, which is the Morass of the Banished, the second new biome.

With that, you’ll be able to check both biomes in Bad Seed, and also take on the new boss after exploring the two areas.

To recap, here’s how to start the Bad Seed DLC in Dead Cells:

That’s all you need to know about how to start the Bad Seed DLC in Dead Cells. Be sure to search for Twinfinite for more tips and information on the game. If you’re returning to Dead Cells after a long hiatus, we’ve got a few tips to help get you back into the swing of things as well.