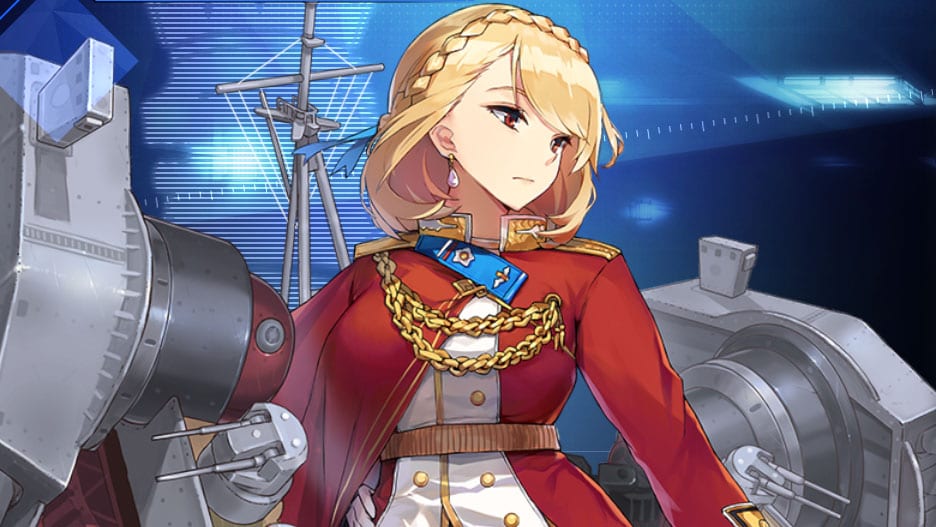 First of all, we learn that pre-purchses on Steam are now open. You can grab the game via the “pre-purchase bundle” which includes the game itself, Neptune from Hyperdimension Neptunia, and the Deluxe Pack with a 20% discount.

We also get to take a look at more screenshots showing support shipgirls (who aren’t actually playable but will offer support during battles and can be selected as secretaries).

Those are Haruna, Hammann, Helena, Hornet, and Prince of Whales.

Here’s how each of the shipgirls featured is described:

Eagle Union’s No. 4 Sims-class who accents her maid-like attire with a white, furry headband. She is almost never honest with her feelings, and complimenting her will lead to the most tsundere reaction one can ever expect. Trying to blush more than her is quite a feat, actually. She’s hesitantly participating only as support for the Joint Military Exercise, but she is hoping she can make new friends there.

Kongou’s younger sister. Unlike her sister, who was raised at the Royal Navy, she was raised at the Sakura Empire, and longs to be as graceful and refined as Kongou. Then again, Haruna is often found solving problems with her fists, and her wild side makes it difficult to attain this grace she so longs for. She is working apart from Kongou at the Joint Military Exercise. What she will experience there is yet to be told.

A key member of Royal Navy who exudes grace and elegance coupled with the charisma of those within the royal family. She dresses well and is currently residing at Sakura Empire along with Hood in place of Queen Elizabeth and Warspite. She doesn’t brag about her vessel’s history, and puts her full effort into supporting the Joint Military Exercise in the name of the Royal Navy. She has a keen interest in seeing the performance and fine dining at the event.

Helena is St. Louis’ younger sister, and excels in offering support, which comes from her self-sacrificing nature. When she first joined, she wasn’t very confident about herself, but her proficiency with using SG radars brought results, which led to many relying on her for help. It’s no surprise that she’s participating in the Joint Military Exercise as support. She is looking forward to the event, and is also hoping to get a chance to be with her older sister and members from the other nations.

Enterprise’s younger sister gives off a brazen appearance but she’s hardworking at heart. Having someone as great as Enterprise as a sister does makes things a bit difficult for Hornet, but she is constantly working to make herself great so that she can accomplish greater goals. She does take after her sister in the form of leadership, and has a lot of friends to boot. She decides to visit the Sakura Empire to cheer for everyone who is participating in the Joint Military Exercise.

We also get a presentation of battle mechanics.

Each character has unique characteristics that can impact a player’s gameplay. Players will notice that some characters move faster than others and some may have the ability to create a shield. You can also switch between playable characters on the battlefield by using the directional buttons. It is recommended to try out a variety of characters to find what type of fleet works best for you!

Playable characters can have up to two weapons or “armaments” equipped. Types of armaments will vary depending on which character is being equipped. Some characters will have longer reload times for their armaments, so players will need to be conscious about how often they fire during a battle.

Aircraft carrier-class characters can equip 3 different types of planes or “aircraft”: Fighters, Bombers, and Attackers. Depending on which aircraft is used, players will either have to manually deploy these planes or they will be sent out automatically. Each type of aircraft has its own strengths and weaknesses. So choose wisely!

When a character’s Lock-On gauge is maxed, players can unleash a powerful attack that will target all enemies within the lock-on range. These are extremely useful when you find yourself in a pinch.