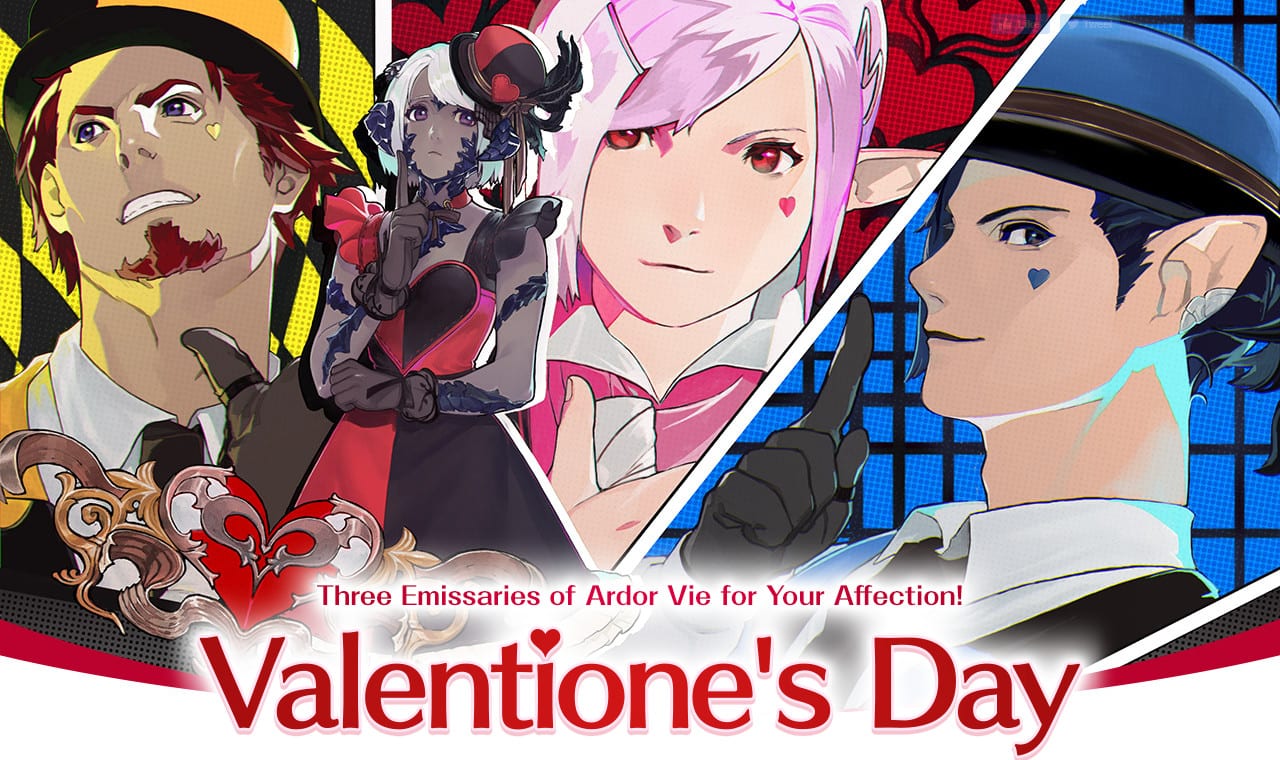 From now until February 17, FFXIV players will be able to participate in the game’s annual Valentine’s Day event, aptly named Valentione’s Day. This year’s quest isn’t quite as straightforward and simple as you might expect, though.

Somewhat unexpectedly, the quest writing gave me pause as I was barreling through it for my reward and actually made me ask myself: do I really need love and romance in my life right now, or are they just temporary stopgaps for what’s really bothering me?

So anyway, the quest begins with you having to choose between three candidates to become Eorzea’s Emissary of Love. You’ll go with them to visit a lovelorn NPC, hear the kind of advice they have for him, then pick your Emissary based on that. Pick one, and bing bang boom, you get a cute new outfit and can go on your merry way.

Except, FFXIV actually manages to make the quest writing interesting enough for you to really think about it this year.

The quest begins with you asking the sad NPC three vital questions: what he does for a living, what he does in his spare time, and what he’s looking for in a partner.

He doesn’t have any satisfactory answers. You learn that he’s extremely dedicated to his job and bringing satisfaction to his clients, but he doesn’t have a lot of hobbies outside of that, and he doesn’t know what he wants in a partner.

Based on these answers, the first candidate, Astrid, suggests that he can try to date his clients and other people he meets through his job.

First of all, Astrid, that’s terrible fucking advice and you should be ashamed of yourself. Trying to date people you have to work with is almost always a recipe for disaster, not to mention unprofessional. I expected better from you.

The second candidate, Bert, suggests that he immerse himself in a new hobby like carpentry so he can open himself up to new experiences and meet people that way. That’s… actually pretty good advice. After all, love often comes to you when you least expect it, and there’s no better way to meet new people than by just going out to do stuff.

The final candidate, Rodrigault, only had this to say:

“He had no answer. A man who cannot answer such a simple query is a man who has lost sight of himself and what he truly seeks from life. For indeed, how can one hope to truly understand and love another if one is not at peace and understanding with oneself?”

These are words that I’m sure, at some point or another, have resonated with all of us. Our client in question only knows that he wants a partner, but he’s got no real identity outside of his job, nor does he even know what he’s looking for in a romantic sense.

He comes packed with all the clear signs of someone who feels unfulfilled and possibly even resentment, and thinks that getting attached is the only way to stop him from feeling so empty.

Sadly, that’s never the solution, and FFXIV takes this opportunity to present us with a quest that reminds us of this important, fundamental truth.

Towards the end of the quest, you have to cast your vote for one of the three candidates, and even that proves to be a pretty tough choice. On one hand, Rodrigault presents the best sentiment, but Bert also stumbles upon a pretty good idea himself.

It’s important to take time for self-reflection, but sometimes the best way to do that is still to get out there and find new hobbies, and maybe you’ll learn more about yourself that way. Even Astrid, who had the worst advice out of all three, shows willingness to listen and learn if you choose not to vote for her, and seeks to understand how she could’ve done better in advising her client.

Valentione’s Day has always been a frivolous event in FFXIV, meant only for the collection of new cosmetics and decorations, but the 2020 event has certainly surprised me with how well thought-out it is.

It’ll be interesting to see how the rest of the player base voted once the event ends, though I imagine most would agree that it’s always important to work on yourself before thinking about anything else.