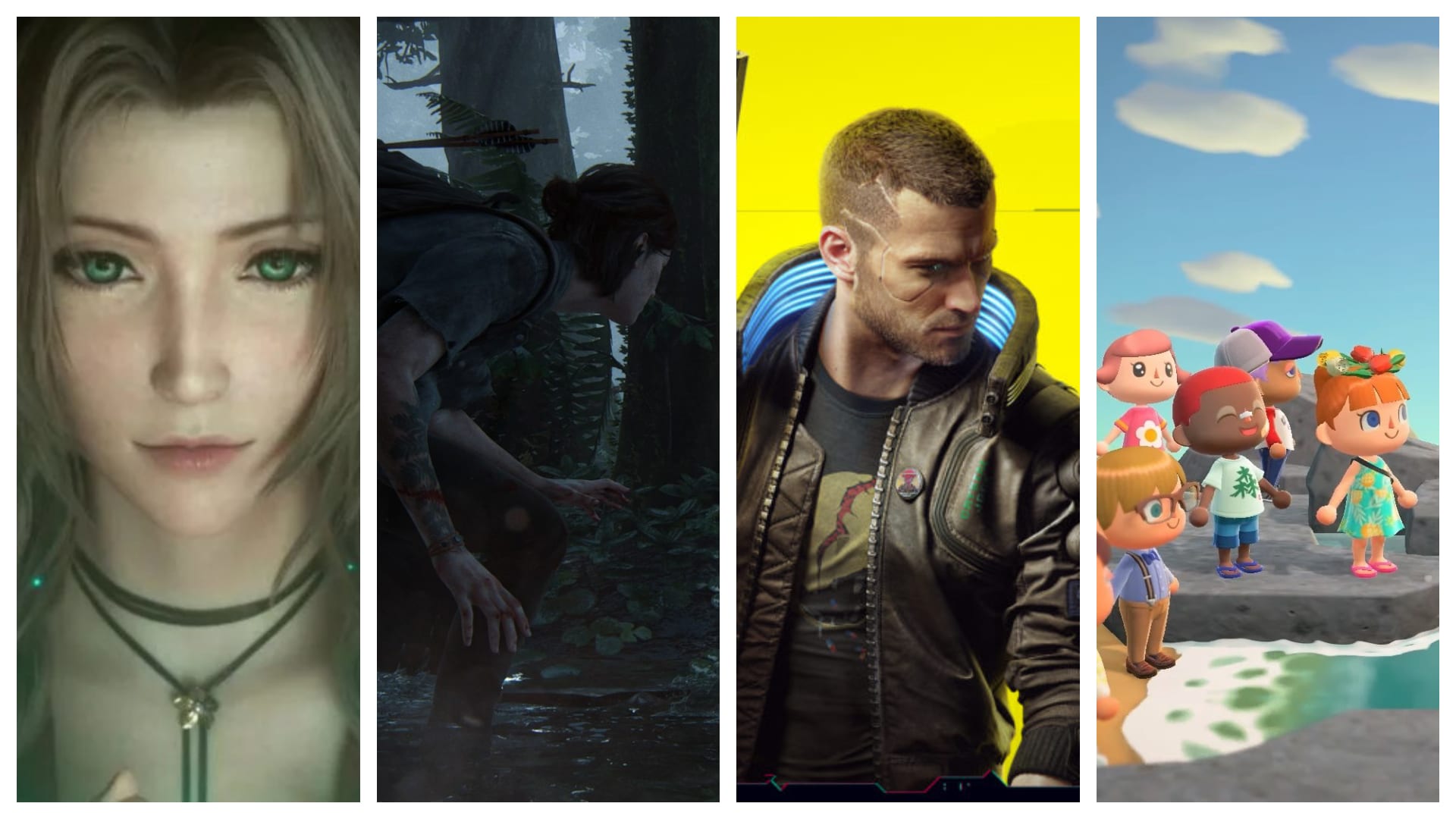 It’s award season here at Twinfinite! We’ve handed out all our awards for 2019 and now it’s time to look forward to the most anticipated games of 2020. Voted on by our editors, these are the games that our team are the most excited about as we approach what is shaping up to be a huge year for gaming.

Let’s start with some honorable mentions, followed by our two runners-up, and of course, our most anticipated game.

While it’ll likely follow the demon slaying example set by 2016 reboot, it’s very difficult to turn your nose up at that idea if it matches its predecessor’s quality.

There are new features that’ll make the action even more breathless though. You’ll have to get used to new weapon types, learn how to take down a variety of new enemies, and keep an eye out for the new lives system.

Rather than spawning at checkpoints, you restart from where you died if you have lives remaining, keeping the action flowing and ensuring that you’re never away from demon slaying for too long.

Just as Doom has always been, Eternal is all about running face first through hordes of demons, chaining brutal kills and finding more bombastic guns.

From our time with it in previews, it’s clear that Doom will feel as good as ever, which is what makes the series so great. We can’t wait to get our hands on the full thing next year.

Features Editor Greysun Morales: Animal Crossing: New Horizons is almost here and I’m so ready to start paying off a loan to a sneaky little annoying raccoon named Tom Nook. I know that doesn’t sound fun at all and it’s something that shouldn’t even exist in a video game but it’s Animal Crossing, so you know it’s going to be good regardless.

New Horizons is all about living somewhere that people would love to vacation with all of your friends and making your town the best spot in the entire world. Gardening, fixing up your house to match your personality, crafting, fishing, and many other things will take up dozens if not hundreds of hours of your time and I’m excited to get pulled in once again.

The deserted island setting is a perfect way to get people wrapped up in the phenomenon that is Animal Crossing and it also helps that the game looks absolutely gorgeous in motion.

Animal Crossing’s debut on the Nintendo Switch is an exciting moment in the history of the hybrid console making it one of the most anticipated releases of 2020, even when you have stuff like The Last of Us Part II and Cyberpunk 2077 coming out around the same time.

Fans weren’t particularly enamoured with the look of the game when Crystal Dynamics and Square Enix first revealed it, but taking control of all of your favorite heroes should be a lot of fun, no matter how they look.

From what we saw at E3, it looks like every character will be completely unique, feeling different and having a variety of attacks/gadgets at the disposal.

It’ll be great to experience a huge Marvel story as the iconic characters, without them feeling like re-skins of each other.

Crystal Dynamics have also proven themselves to be quality action game developers, so it’s exciting to see what they’re going to do with such a huge license.

Arguably more exciting that the linear story, however, is how they’ll approach multiplayer. Creating a mini-Avengers squad with your friends will be a lot of fun, and Marvel has created a world that’s expansive enough to see content add to the game long after the story’s credits roll.

Senior Editor Alex Gibson: Well before I’d ever played a Witcher game, I read that a developer called CD Projekt Red had acquired a license to develop a video game adaptation of Cyberpunk 2020.

As a long-time Deus Ex fan, the prospect of an open-world game set in a grim, near-future dystopia in the mold of Blade Runner and William Gibson’s Neuromancer had me hugely excited. Back then, nobody made cyberpunk games.

Fast forward eight or so years and cyberpunk is now very much the in-vogue aesthetic. Suddenly everybody wants to make a cyberpunk game or, at the very least, drench their games in neon. Why? Because over the course of that eight years CD Projekt Red released The Witcher 3 to critical acclaim and became an industry darling in the process. It’s become the trendsetter.

The very notion of CDPR applying its Witcher know-how to a new open-world RPG has rightly sent much of the gaming community into a fever of excitement.

And yet, while I too have since become a passionate Witcher fan, Cyberpunk 2077 has me most excited because it actually looks nothing like The Witcher 3. This ain’t no Ubisoft Assassin’s Creed to Watch Dogs switcharoo reskin job. No, Cyberpunk 2077 is so much bolder and more ambitious.

Apart from what I’m sure will prove to be a game full of deep lore and rich storytelling, it’s almost unrecognizable as having been made by the same team as The Witcher 3, so different is its design.

Cyberpunk 2077 is CDPR risking it all to push into totally uncharted territory and give us something completely fresh. It’s hugely exciting, and April 2020 can’t come soon enough.

First Runner-Up: The Last of Us: Part II

Reviews Editor Zhiqing Wan: At the end of 2018, I wrote about The Last of Us Part II and talked about how it was one of the most anticipated video game releases of 2019. Since it didn’t end up launching in 2019, I’m writing about it again, and yes, it’s still one of our most anticipated game releases for 2020.

Enough time has passed since the release of the original game that players have been able to stomach that gut punch of an ending, and accept that our favorite characters in Joel and Ellie have moved on with their lives since then. Leaving behind one dark event doesn’t mean there isn’t more trouble brewing on the horizon, though; The Last of Us Part II is set to be focused on Ellie, her past, and her future.

The Last of Us may have put us in Joel’s shoes for most of its runtime, but it was always Ellie’s story. Part II sees her grown as a more mature teen with new relationships and friendships to handle, and a newfound desire for revenge. It would appear that The Last of Us was only the beginning of hardship for Ellie, and there’s plenty more waiting for her around the corner.

Editor-in-Chief Ed McGlone: We’re a staff full of JRPG fans mostly in their mid-to-late 20s. Aside from those people… we’re JRPG fans in their 30s and 40s.

The hype has always been real with this game, and whether it’s negative or positive, the remake has received a ton of attention since it was spectacularly announced way, way back in 2015. I was there in the room when it was revealed and I’ve yet to see a more pumped up E3 presser crowd since.

In the years that have followed, worries about what the game was going to look and play like, and the timeline for when the multi part game would be released have percolated.

For some people not all that invested in the franchise, the 2020 release of Final Fantasy VII Remake will just be a spectacle to watch; to see if it lives up to the highest of expectations of hardcore fans or if it falls on its face like so many similarly hyped games before it.

I’ll admit for a while I harbored some concerns, but after getting to play it finally at E3 2019, and hearing that there would be a turn-based classic mode option, pretty much all of my worries have faded. Sure it’s going to take a while to fully roll out, and Square Enix could bungle the story if it tinkers with it too much, but all in all I couldn’t be more excited for a game than I am this one, and my fellow editors here at Twinfinite share my sentiment.

Those are our personal picks for the most anticipated games of 2020. What are yours? You can let us know in the comments or you can be on the look out on our front page for our fan vote which will be launching in the coming days!