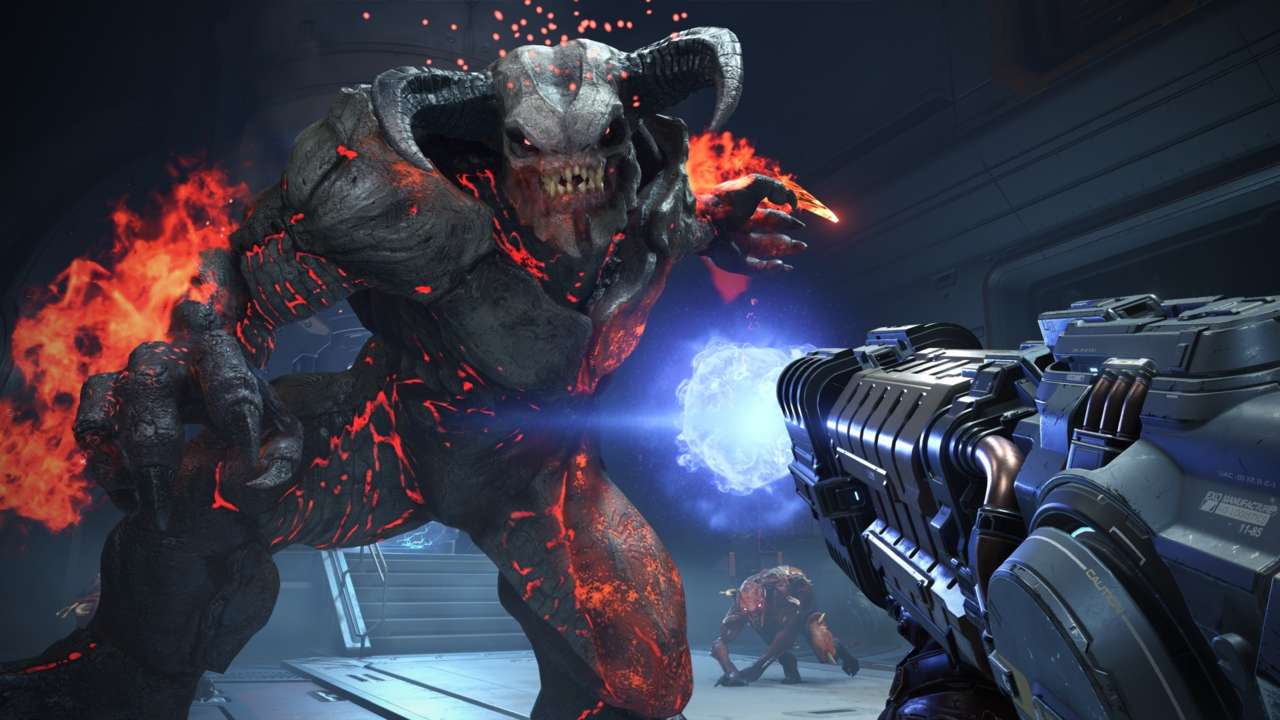 Most of my E3 2019 demo of Doom Eternal was action-focused which makes sense. However, arguably just as memorable of re-experiencing the glory that is Doom’s gunplay, was the two cutscenes that I saw (spoilers I guess?).

The first, had Doom Slayer AKA Doomguy, show up to a Phobos facility that is in total chaos. Workers are visibly confused at an order blaring over the speakers to let the demons in. Then, they are in stunned silence as they see the Doom Slayer slowly strut his way right into the fray.

He calmly walks up to the face of a scientist and nonchalantly drags him and the ID card around his neck to a console to give himself access.

Not immediately recognizing him, a solider tries to halt the Doom Slayer, but when he realizes who he’s talking to, he freezes and the Doom Slayer relieves him of his weapon and jumps to action.

The second, was a short moment where the Doom Slayer reaches a massive BFG artillery weapon firing attacks into some kind of demon stronghold. The Doom Slayer reaches this weapon, and instead of loading another shot, removes the ammo and loads himself in, and fires himself at the stronghold and then proceeds to rip and tear every demon there. More effective honestly.

That’s really the perfect way of describing the mythos of the Doom Slayer. The character has earned the right to be considered one of the most bad ass heroes in all of video gaming right now.

Doom (2016) brought the character back to its former glory and in the years since, the legend of the Doom Slayer has grown as word of mouth spread on just how awesome the 2016 reboot was. Hype has now built for Doom Eternal, and Id Software is absolutely up for the task of delivering on that hype.

There are two major changes coming to Doom Eternal that we could glean from the E3 2019 demo: some more light platforming, and the addition of new kill primers (such chainsaw and glory kills in the last game).

The platforming is nothing crazy. Doom Eternal is going to take place in even more wide open areas and the additional sections where you’ll need to properly time dashes, wall climbs, and grapple hooks are there to make more effective use of the space.

The latter, the kill primers, are way more impactful as it gives you almost an overwhelming amount of things to think about while the action is going crazy.

Before, you could Glory Kill for health and chainsaw enemies for ammo. You can still do that, but now you can also set enemies ablaze to trigger armor drops and chain melee attacks after a glory kill using the Blood Punch rune to get more health.

Instinctively, you would think having more ways to get armor and health would make things easier, but the difficulty is turned up appropriately.

Just like the last game, the only way to play Doom Eternal is to constantly be on the move killing anything that moves, and kiting enemies that you aren’t quite ready to get to.

You’ll want to constantly keep an eye on your ammo, health, and armor and decide quickly in the moment if you should glory kill, chainsaw, or light up with your flamethrower.

Because trust me, if you slip up and neglect any of that, you’ll be punished. I can speak from personal experience on that one.

The demons are brutal and will hunt you unrelentingly you as you do to them. Doom Eternal promises new weapons and demons (and even angels). There’s the new Ballista weapon which is essentially a gun that fires a massive explosive bolt that is capable of ripping up the toughest enemies.

On the flip side, the Plasma Rifle has a new alt attack that will fire a stun blast with the charge up time depending on the enemy you’re using it on. So again, it’s another quick on the fly moment you have to pick up on to switch to the Plasma Rifle when you find yourself getting overwhelmed by light and medium armored enemies and switch to something like the Ballista if you have something powerful like an Arachnotron firing at you from far away.

While dying sucks, it feels deserved in Doom Eternal. I never thought anytime I died was cheap. There was a clear reason be it poorly engaging certain demons by using the wrong guns, or just attacking them like the big dummy I am, or just not realizing I had zero ammo until it was too late to do something about it.

Doom (2016) is arguably the best FPS of this generation, right up there with Titanfall 2. The difference is I don’t think there’s going to be a new Titanfall game any time soon.

Doom Eternal is set up to not only be a GOTY contender, but if follows through on delivering more of what we enjoyed from the last game, with even more badass moments and improved gameplay, the title of FPS of the generation is right there for Doom Eternal to take.