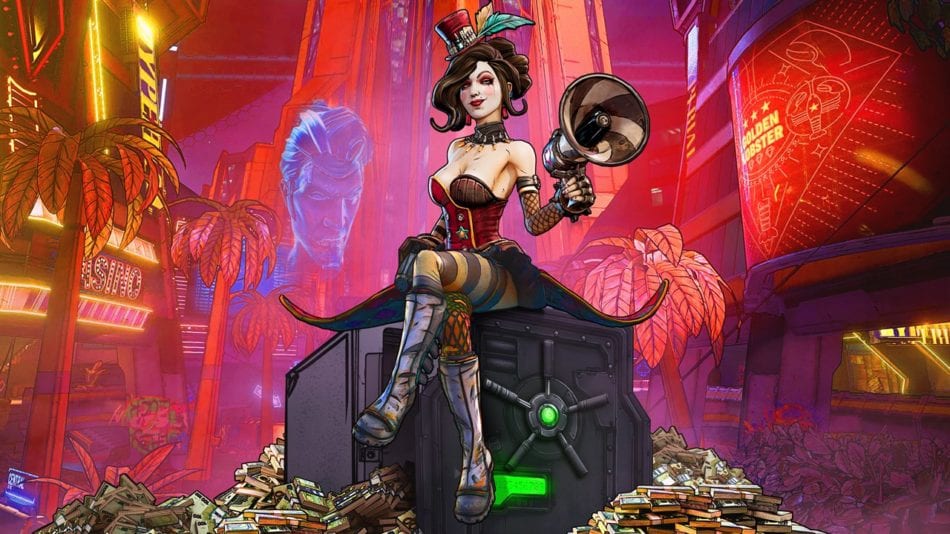 Though Borderlands 3‘s Moxxi’s Heist of the Handsome Jackpot DLC may not have the usual crew challenges from the base game, it does have a fair few collectibles to track down. That’s why we’re here to walk you through where to find all of Torgue’s Marketing Mistakes in Borderlands 3 Moxxi’s Heist.

Following a dire recall notice, Torgue needs you to find and destroy the last remaining bottles of an explosive brand of hot sauce he created. Each bottle needs only be shot from a distance to be counted as dealt with, and as a result don’t need to be “reached” in the same way other challenges do.

As such, they can be some of the easiest challenges to complete in the DLC or base game, and we’re here to walk you through where to find each one with minimal hassle.

The first of Torgue’s Marketing Mistakes you can find in Borderlands 3’s Moxxi’s Heist DLC is to the north of the Welcome Turrets protecting the VIP Tower area.

From the Casa de Timothy Fast Travel station, head East toward the turrets. Then, turn right toward the small alcove area with a walkway to the right of it.

Once you reach the area, the Crew Mission should trigger and give you an approximation of where the hot sauce bottle is. Head toward the center of the area, and then look up toward the glowing bottle on top of a light fixture.

Shoot the bottle, and you’ll have taken care of Torgue’s first Marketing Mistake.

The second of Torgue’s Marketing Mistakes you can find is in the back end of the Marketing District. This is one of the trickier bottles to spot, so follow the directions below to take it out as soon as possible.

From the area’s fast travel station, head West toward the J-Spot. Enter the sub-area, and then look for a stuffed skag sitting on a rock.

The next bottle you can find in Borderlands 3’s Moxxi’s Heist DLC is in the Compactor section.

After gaining access to the area, head toward Trashlantis until you come to a more wide-open area just before entering the town. The Torgue’s Marketing Mistake icon will appear, though the bottle won’t be anywhere you can immediately see it.

This is because it’s hidden in the back of a shipping crate elevated high above the ground, and the only way to spot it is from near the entrance of the area.

From the entrance, head to the right side of the area. Look for a pile of shipping containers stacked up like steps, and then jump onto the first one. Look up toward the bridge hanging over the containers, and right below it will be an open container with the bottle inside it.

The fourth of Torgue’s Marketing Mistakes can be found in Jack’s Secret area.

Turn around, and the bottle will be sitting up on top of a purple tube.

The last of Torgue’s Marketing Mistakes can be found in the right rear section of the VIP Tower area, and you’ll need a bit of cash in order to access it.

From the area’s entrance and primary fast travel station, head forward into the area. Proceed into the boss arena area where you can battle Freddie and then head to the top right corner of the section of the map.

You’ll find a VIP access door which requires the usual $72,250 to enter. Pay the fee, and once the door opens you should see the last bottle of Torgue’s hot sauce on a table directly in front of you.

As for what you get for tracking down all of Torgue’s Marketing Mistakes in Borderlands 3’s Moxxi’s Heist DLC, it’s a fittingly explosive firearm known as the Vigorous Scoville.

A legendary pistol manufactured by Torgue, the weapon lobs explosive rounds with a decent amount of splash damage in place of firing standard pistol rounds. It deals standard damage, and while it can cut through most enemies like butter, it comes at the cost of using four pistol rounds per shot.

Hopefully this cleared up how to find every one of Torgue’s Marketing Mistakes in Borderlands 3’s Moxxi’s Heist of the Handsome Jackpot DLC. For more on the game, check out our guide wiki. It has plenty more guides on topics like how to get the Redistributor and how to farm the Debt Collector.