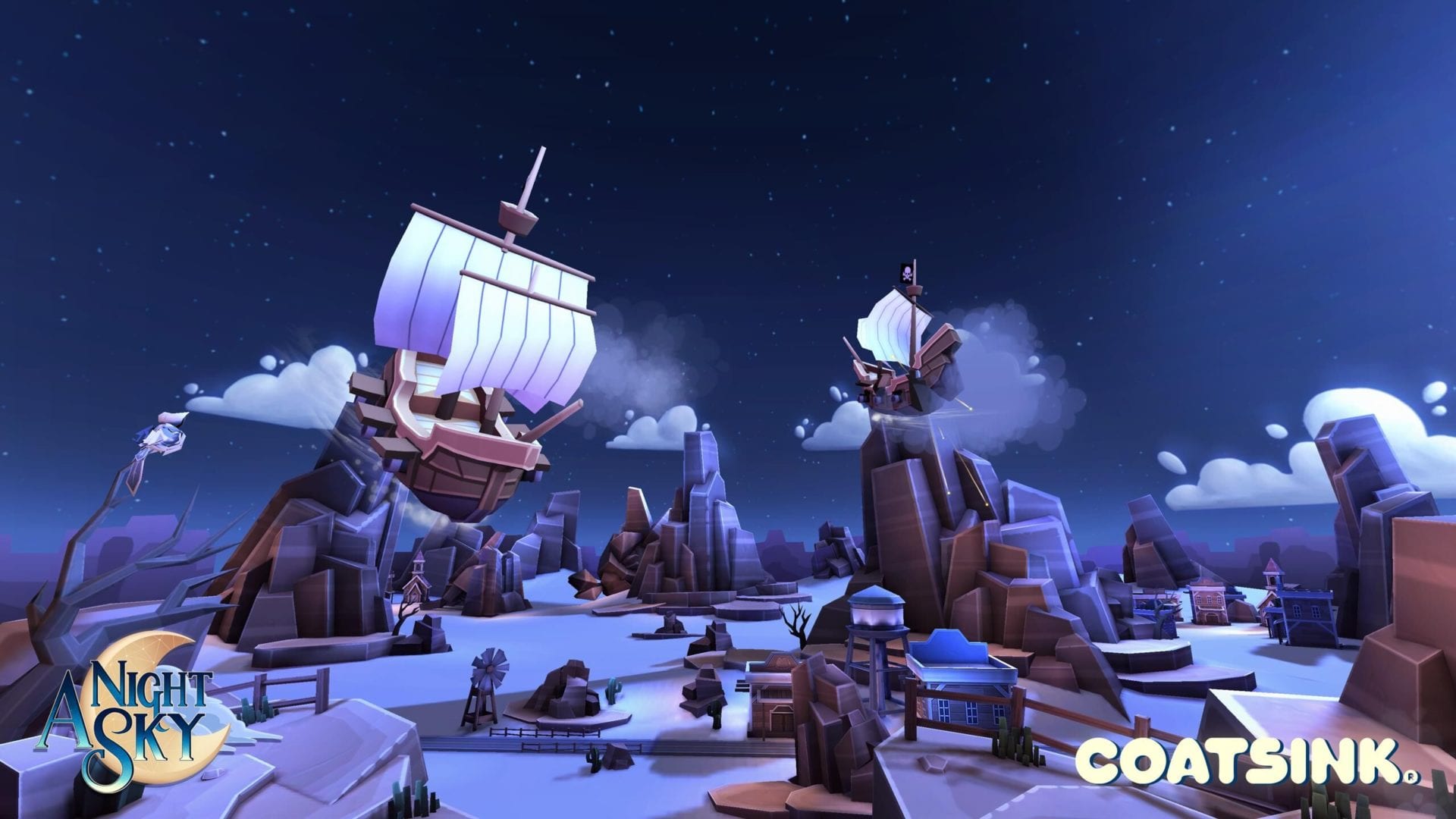 UK publisher and developer Coatsink has an eclectic portfolio. From side-scrolling strategy/resource management games to story-driven adventures, the studio has an enthusiasm for producing gaming experiences with unique mechanics and interesting design choices.

It’s turned into something of a philosophy, which has seen the team produce content for a diverse range of platforms, including contemporary consoles, PC, mobile, and virtual reality headsets.

The company is particularly passionate about VR, having now delivered six games since 2015 across Oculus, HTC, Sony, and Samsung headsets.

Coatsink’s interest in the technology and the team’s talent for innovating clever ideas hasn’t gone unnoticed. It’s earned them a partnership with Oculus and, more recently, a nomination for VR Game of the Year at this year’s VR Awards in London for their VR puzzler, Shadow Point.

Their successes in the VR space make Coatsink a studio that’s engaging with VR not just as a side project but as a catalyst for driving the entire company forward.

This is somewhat unusual, given VR’s slow trickle toward mainstream adoption, and the tale of how it came to pass is both an interesting and potentially inspiring case study for other developers trying to find their feet in this tricky new corner of the market.

The studio’s VR story began in 2012 when co-founders Paul Crabb and Tom Beardsmore backed Oculus Rifts’ Kickstarter. A year later they had a DK1 dev kit and gleefully went to work playing around with different designs.

Tackling this unfamiliar new ground was good fun, but making experiences that were actually entertaining video games wasn’t so easy.

Crabb describes their first (unreleased) Oculus Game Jam project called The Climb (unrelated to Crytek’s The Climb), a climbing game that was designed to simulate vertigo, as a “vomit simulator” that broke “all the good practices that you try to enact when making VR games.”

Screenshot of the “vomit simulator”

“We just didn’t know back then that this wasn’t the way to do it,” he admits to me with a chuckle.

But hard lessons learned early helped the team to appreciate what did and didn’t work in VR, and it wasn’t long before they had concepts and prototypes that held real promise. Luckily for them, a chance opportunity presented itself to work with the very same company they’d backed years before.

After a stint mentoring at Teesside University, Tom Beardsmore was contacted by a former student who had gone on to land a job at Oculus. He was told that Oculus was looking for gaming pitches for its new VR hardware and suggested Coatsink send something across. And so they did.

Esper was that pitch, a game about a group of individuals with telekinesis who have to pass a series of tests to prove to the government they’re in control of their extraordinary and potentially dangerous powers.

“I think one of the things that stood out about Coatsink is that we were designing it for the headset,” COO Eddie Beardsmore explains.

“We looked at the headset, and rather than taking a traditional game that’s already existed in a 2D format, we built it from the ground up. We looked at what was unique about the headset; it had the touchpad, for example, and so we asked ourselves what was the first thing we thought of when touching our fingers against the side of our head. It was kinetic powers…”

Esper launched on Oculus Rift back in 2015 and it earned a very positive critical reception. Since then, Coatsink and Oculus have forged a partnership that has seen Coatsink establish itself under the Oculus Studios umbrella, producing games exclusive to Oculus platforms. It’s a formal arrangement, but one that allows Coatsink plenty of freedom.

“They’ll usually come to us and let us know they have a certain type of market that they’re wanting to make a game for,” Crabb says.

“They’ll give us a profile and we’ll take that and make some pictures that would appeal to that kind of profile of a gamer, whether that’s someone who likes stories a lot or someone who likes a competitive game. But they do give us a lot of creative freedom to come up with what we actually want to make.”

More than just a license to design the games that excite the team, though, Crabb and Beardsmore value Oculus because they believe the company and its hardware is the key to unlocking VR’s mainstream success.

Indeed, while confident about VR’s potential, the pair do still recognize that VR is still finding its feet and having to battle its way into the spotlight.

“In my mind –and I think Paul would agree with this– Oculus is really driving the industry forward and the Quest is the perfect device for taking VR mainstream. It’s cheap. It’s easy to use and really fast to just get into,” Beardsmore says.

“There are no wires. You just get to the game within a couple of seconds. For me, that’s the real selling point of the Quest.”

There’s evidence that Quest’s streamlined design is improving accessibility beyond their own experiences, too. Positive user feedback on their most recent VR game, Shadow Point, suggests the hardware’s intuitive functionality is actually enhancing the gameplay experience.

Beardsmore mentions a review about a player who introduced his father to Quest with Shadow Point and the proof is in the pudding. You can read the review here.

Nausea is, of course, one of the big hurdles that VR as a platform faces. For all developers, finding solutions to mitigate VR sickness is a key priority and that’s no different for Coatsink.

Years on from their infamous vomit simulator, the studio has, so far, managed to avoid that pitfall with its current library of VR games.

They’ve achieved this partly by producing mostly static experiences, but also by putting a premium on giving players as much choice about how they play as possible.

“Obviously, there are people who don’t feel this (nauseous) experience at all, but then there are some people who are quite sensitive to it, and there are varying degrees between those two,” says Beardsmore.

The way we got around it with Shadowpoint was to give players options in terms of how they want to play the game.”

Crabb goes on to explain their methodology:

“If you’re slightly sensitive, you can just turn on the vignette which clouds the periphery of your vision, which is usually where your eyes detect motion.”

“So if we darken the edge of your visions, which usually is enough for most people… but if you’re still super sensitive, we do have a full teleport option. So you never actually experienced any actual movement that you don’t do yourself by physically walking around. So even the most sensitive users can still enjoy the game.”

Moving forward, continuing to design games that take full advantage of the hardware will be a priority for the team, and in the case of Quest, that means working toward incorporating new locomotion techniques that simply didn’t work with more rudimentary headsets like Samsung Gear and Go.

A task easier said than done, of course, but it’s made much simpler because of the strong community of VR developers that Crabb and Beardsmore tell me is so unique and inspiring.

“One of the best things that we found with the VR industry is just a collaboration and camaraderie between the developers,” Crabb tells me.

“Everyone is super willing to share all the solutions and experiments they’ve found. In this way, there’s no one solution that can be attributed to any one company. Everyone has been pitching together and helping each other out with the amazing discoveries they’ve found.”

Throughout our conversation, it’s plain that quite apart from just their energy and love for the gameplay experience, a huge part of VR’s appeal is the sense of being one of a number of pioneer developers involved in this nascent segment of the games industry.

Crabb says enthusiastically that “there’s so much untapped discovery that there’s room for everybody.”

And for those worried about taking the big, risky plunge into VR development, the financial returns Coatsink is seeing have them pleased.

While they weren’t prepared to talk specific numbers, Beardsmore declared that “sales have been good” and Crabb explained that they “vastly exceeded” their expectations, adding that he had “no idea how well the Quest was going to take off.”

It’s no wonder the pair are so bullish about marching forward with VR, then. In the short term, that likely means more VR games for the Oculus Quest as part of the two companies’ ongoing partnership, but they’ve all manner of concepts and they’re wanting to execute with or without the financial help of a major backer like Oculus.

“We’re constantly making our own experiences just on the side just in time for fun game jams and such,” says Crabb.

“We may not be able to make the experiences as grand or as successful without Oculus’ help, but we’d definitely be exploring those ideas just because that’s what we love to do and that’s why we’re in this industry.”

Beardsmore adds that Coatsink has “a number a number fairly advanced prototypes,” one of which is quite far along and is entirely self-funded simply because of the “passion” they have for the industry.

Whether these prototypes are to be molded to suit a game pitch for Oculus or kept in the back pocket remains to be seen. There wasn’t anything to share at the time of our conversation.

For more information about Coatsink’s various projects and resume, you can head over to their website.

In addition to the titles under the Coatsink developer/publisher banner, the team has lent a hand to plenty of other acclaimed titles across different platforms, including Bad North, Gang Beasts, and Papers, Please.