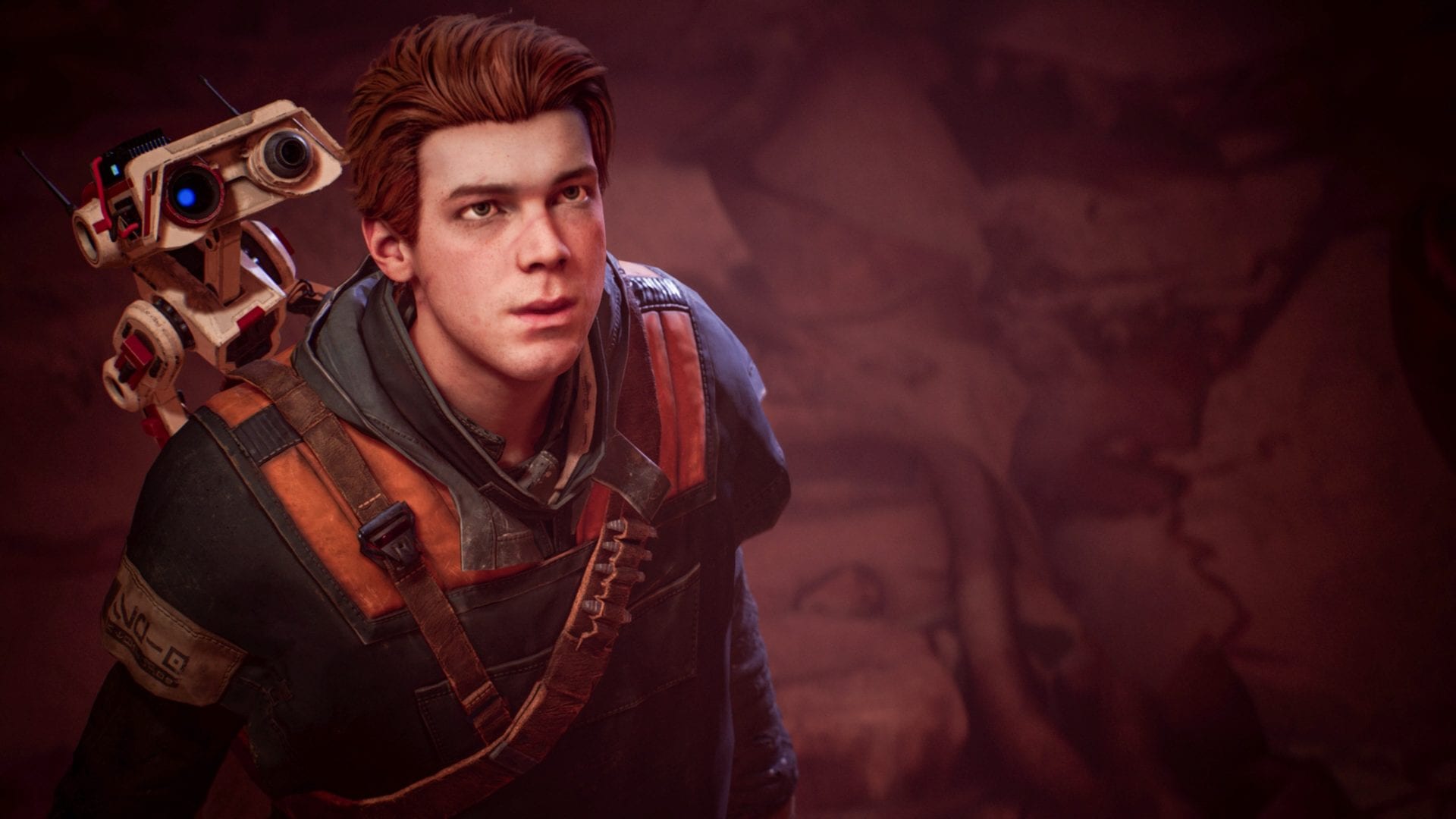 Star Wars games have had a rough go of things over the last few years, so when EA and Respawn announced a brand new story-focused single-player game, fans were excited. Yet, for how good the ideas sounded I never really knew what kind of game Star Wars Jedi: Fallen Order was going to be. That’s all changed now after playing for about four hours, and needless to say, I’m on board.

I want to jump right into things by saying Fallen Order directly takes ideas from games like Dark Souls and Metroid, but don’t take that to mean it’s just copying them.

This is a Souls-like in a loose sense, but one that’s far more accessible. If you don’t know already, you play as Cal Kestis, a young Jedi padawan on the run from the Empire.

After a quick tutorial section, our demo dumped us onto our ship, where we could choose between two planets to travel to. At the event, Fallen Order Director Stig Asmussen was quick to point out that “player agency” is an important factor of the game.

You can travel to planets out of order, but you might have a more difficult time. In this case, we could travel between an icy planet called Zeffo and a desolate hellscape called Daphomir, which Star Wars fans might be familiar with.

I decided to follow the story path and head to Zeffo, where Cal was searching for some kind of Jedi relic. At this point a major facet of the game that we haven’t really seen reared its head, exploration.

Fallen Order is surprisingly heavy on exploring the environment, and it works similarly to what you’d find in a Souls-like game. There are tons of branching paths, optional items, and platforming challenges.

Along the way you can unlock shortcuts that loop you back to save points, or make getting around easier. Considering Zeffo is an ice planet, there were times that I’d hit a hill encased in ice and have to skate down it at high speed.

There’s a very methodical nature to exploration as you poke your way around the massive map, and exploration is definitely rewarded.

Along my trip I found a handful of new costume items for both Cal and DB-1, items that let me customize the color and hilt of my lightsaber, and even another Stim charge that permanently gives me another healing item.

Of course, while you’re making your way through the planet you’re contending with wildlife and Imperial forces, trying to manage your health and Force meters in the process.

Health management is vitally important, and you have limited heals like the Estus Flasks in Dark Souls. Save points let you rest and recover your health and healing items, but respawn any and all enemies.

Past that, if you’re killed you lose all the XP you gathered, but can regain it by simply hitting the enemy that killed you.

I was honestly surprised by how much I enjoyed exploring, and little collectibles help make the experience more engaging. One of these, called Force Echoes, are basically lingering memories that let you hear what happened in that exact spot in the past. This gives you little bits of story or lore, while also providing a minor XP boost.

The quiet exploration is juxtaposed against a fast-paced combat system very focused on timing. I go into more detail on combat in another preview, including an intense boss battle with the Ninth Sister.

Basically you have a block, dodge, light attack, heavy attack, and special moves.

By pressing block at the exact right moment you can parry a blow, and it quickly becomes obvious that this system is hugely important. Combat situations often swarm you with weak enemies, meaning you’ll need to deflect blaster fire to kill off a ranged enemy, while holding off the melee ones.

It’s honestly a tough system to describe in words, but if you’ve played something like Sekiro or The Surge, Fallen Order will feel somewhat similar.

Despite being fast-paced there’s a methodical nature to combat, and you need to know when to block, dodge, or attack.

Special attacks mostly take the form of Force powers, like Fore Push, which are dictated by a Force meter at the bottom of the screen. The meter drains as you use attacks, and the only way to recharge it is by landing blows on enemies.

Because of this, the system encourages you to be aggressive and land hits on enemies, rather than simply hanging back. At the same time, both you and the enemy have stagger gauges, and as you’d expect when depleted you stagger.

But Force powers play a much bigger role than combat moves, as they also serve the game’s “Metroidvania” style. Partway through my demo I unlocked Force Push, which suddenly gave me access to so much more of the world.

Areas I passed before and couldn’t open were now accessible as I could push items out of the way, or blow out walls. Immediately after getting the ability, I was also launched straight into a lengthy puzzle sequence.

Think of something like a Zelda game, where you get a brand new item and you’re then forced to use said item in order to solve that dungeon’s puzzles.

Using Force Push I had to move a sequence of massive stone balled around, launching them off ramps in order to get them into indentations that would then move platforms or walls.

It should go without saying that everying in Fallen Jedi feels entirely Star Wars, just like EA’s past endeavors. Lightsabers give off that satisfying hiss, and Force abilities have all the weight behind them you could want.

One of my favorite little features is when you’re exploring dark areas, you can have Cal hold up his lightsaber by holding the guard button, using it as a torch to light your path.

The dedication to detail and keeping everything within that Star Wars aesthetic is staggering, and Fallen Order looks and sounds exactly like Star Wars.

Despite how much the game draws from Souls games, as I said earlier I don’t know if I’d go all the way and actually call it a Souls-like. Sure, it uses a similar combat system, but it also has more emphasis on action.

Couple that with the fact the game has four different difficulty levels and you have an experience that appeals to a wide array of players. Changing the difficulty in the menu shows what it affects, with a gauges representing the time you have to block, incoming damage from enemies, and the damage you cause.

The different between the lowest difficulty, Story, and the highest, Grandmaster, is seriously night and day. Grandmaster kicked me into the dirt repeatedly, while Story is something I could breeze through without trying.

This is Star Wars after all, one of the most popular entertainment properties of all time, so it makes sense you’d want the experience to still appeal to anyone and everyone. With four different difficulties, I hope Fallen Order can make that appeal to a wide audience, but it’s too hard to say with just a few hours under my belt.

Finishing the planet of Zeffo took me almost all of my playtime, but there were still so many secrets and items to uncover, meaning I’d probably end up going back later.

The other thing to take into account with Fallen Order is that it’s dedicated to telling a true-blue Star Wars story, one about an underdog Jedi that has to teach himself the ways of the Force.

Walking out of my playtime it’s clear that Respawn has had a vision for this game from the start, I just wish they had made that vision entirely clear before now.

It takes elements from so many other genres of games, but tries to combine them all into a unique experience. Playing through one planet, I enjoyed it, and I really want to explore more, see what deadly creatures lie in wait or what happens in the mysterious story of Cal.

With that said, I do have worries that Respawn may not be able to keep that level of enjoyment up throughout and entire game, but hopefully, they’ve got a few tricks up their sleeves.

Still, the bottom line is that I went in with mixed feelings, and came out with almost all positive ones. That’s reason enough for me to look forward to Fallen Order’s release.