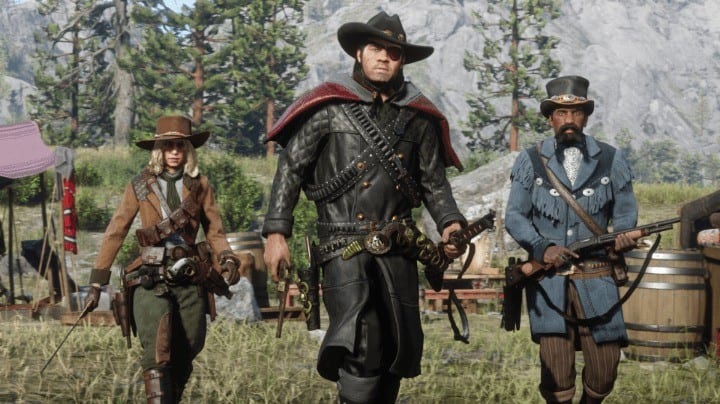 How to Start All Frontier Pursuit Missions in Red Dead Online

After you’ve successfully downloaded the latest update for Red Dead Online, you should notice three new yellow mission markers on your map.

Each one is tied to a different Specialist Role introduced via the Frontier Pursuits mission lines, and once you trigger them, you’ll be able to start participating in their respective mission line for a small amount of Gold Bars.

If you don’t have the necessary amount of Gold Bars when you reach each mission marker, you can return to it at a later date after you’ve earned more from participating in events and daily challenges.

If hunting down outlaws for a nominal fee is what you crave, you can start the Bounty Hunter Specialist Role by traveling to Rhodes. After triggering the introductory cutscene, you can purchase a Bounty Hunter License from the sheriff’s bounty board for 15 Gold Bars.

You could also get the license for free if you linked your Twitch Prime account to your Rockstar Social Club account before Sept. 8, though that promotion doesn’t apply to red Dead Online players who link their accounts after said date.

A more detailed explanation on how to start the Bounty Hunter Specialist Role’s missions can be found here.

If tracking down rare treasures and oddities is more your game, you’ll want to make a beeline for the Collector Specialist Role mission marker, found northeast of Moonstone Pond in Grizzlies East.

This Frontier Pursuit sees you collect valuables for the traveling mystic Madam Nazar, who will get you started on your way to completing missions by selling you a Collector’s Bag for 15 Gold Bars.

At the moment, there aren’t any promotions that allow you to nab the bag free of charge, so you’ll have to pony up the sum or else come back after completing some side tasks and events.

More on how to start this Frontier Pursuit can be found here.

If you’d rather spend your time hunting animals, trading their skins and upgrading your camp, then you should focus on starting the Trader Specialist Role’s line of missions.

This is done by traveling to the nearest post office and picking up a letter from Cripps, who has a new business venture he’d like you to invest in. He tells you to meet him in Armadillo, where you can buy a Butcher’s Table necessary for the venture for 15 Gold Bars.

However, if you’re playing Red Dead Online on PlayStation 4, then you can get the Butcher’s Table free of charge until Oct. 14.

More details on how to start the Trader Specialist Role’s missions can be found here.

That covers how to start all of the current Frontier Pursuits’ missions in Red Dead Online. More Frontier Pursuits are planned to be added in the future, so we’ll add the necessary information when if becomes available.