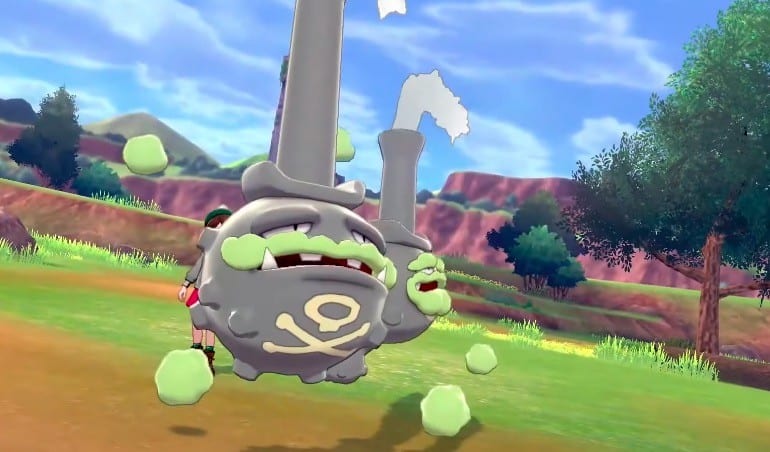 The Pokemon Company dropped a new trailer for Pokemon Sword and Shield today, which revealed that there will be region-exclusive forms of existing Pokemon, a feature that was introduced in Sun and Moon. One of these new designs is the Galarian form of Weezing who seems to have smokestacks on its head and a mustache made of gas.

Game Freak seems to be going all-in on the Victorian/London setting of the Galar region, and folks have gone on Twitter to state how much Weezing looks like an English gentleman of some sort.

If you ask us, Weezing looks like a blokemon (/bows, thank you) who just wants a good ol’ cuppa tea, governor! Or perhaps it’s just a child trying to disguise itself as older for some bizarre reason? Either way, this new Weezing is a bit of an odd design.

Fans have even compared the new Poison/Fairy-type to Doug Dimmadone, a character from the Nickelodeon series, The Fairly Odd Parents… due to the nature of his very large top hat.

I swear Game Freak better give a white color pallet to a shiny Galarian Weezing so we can have a Doug Dimadome Pokemon.#PokemonSwordShield#GalarianWeezingpic.twitter.com/X5rMRXoYSl

Weezing: Who are you?
Galarian Weezing: I'm you, but British#PokemonSwordShieldpic.twitter.com/ArQyz6YpLD

Weezing might have been one of those overlooked Pokemon from the first generation days, but now it’s getting so much love due to its new Galarian form.

It does a look a bit like it has broken some environmental laws or works as a factory foreman somewhere, dumping out dangerous gases to the masses. I’m not the only one to think so:

Galar Weezing looks like it has broken several environmental laws for the sake of profit. pic.twitter.com/uVlNcoWqkA

Capitalism has its pokemon now, okay it's a Galar form of Weezing but its totally a factory now. pic.twitter.com/Qc75OUTe32

Galar Form Weezing has a YouTube channel called “The Rational Pokémon” where he talks about how cultural Marxism is ruining battles pic.twitter.com/XNJg16PgGc

Everyone else: "Galar Weezing looks like a bong lol"

Me: "Galar Weezing pays his employees in scrip and hires 'detectives' to spy on their activities"

Also, wearing a top hat just makes you better than most people –that’s a cold hard fact. Actually, when we get to see more Galarian forms of other Pokemon, they are sure to be better than the original. I really cannot wait to see how Koffing looks in this new British form as well.

Whenever there’s a new trailer for Sword and Shield, there’s always something that gets turned into a meme, and I’m very happy to see Weezing getting the love that it so rightfully deserves. Spread the love… and the gasses for our boy… or girl.

I hope Galarian Koffing will have like a tiny Bowler hat sorta deal that evolves into a top hat for Weezing pic.twitter.com/lYM26I22ZE

#PokemonSwordShield Ok Marnie is cool, but what about the true Waifu of this trailer ? The Weezing Galadome ? Owner of the Galar Galardome ? pic.twitter.com/zMcjGcFRQH

Galarian Weezing, you are my everything. Incredible #PokemonSwordShieldpic.twitter.com/gxeILSRMIn

I’m sorry but Galarian Weezing has a fucking smokestack top hat and a mustache?!

Weezing, Zigzagoon, and Linoone are the only new Galarian forms that we’ve seen so far for Sword and Shield, but we cannot wait to get a glimpse of the other ones. Hopefully, they’re better than Alolan Diglett.

Anyways, if you missed the trailer from this morning, do be sure to check it out right here as well as the Japanese trailer that shows off one of the many new features, Poke Jobs.

Also, let us know how you feel about Galarian Weezing. Does this make you hyped for Sword or Shield? Or do you find its design to be lacking in creativity? Feel free to drop a comment and share your thoughts and opinions on the matter!