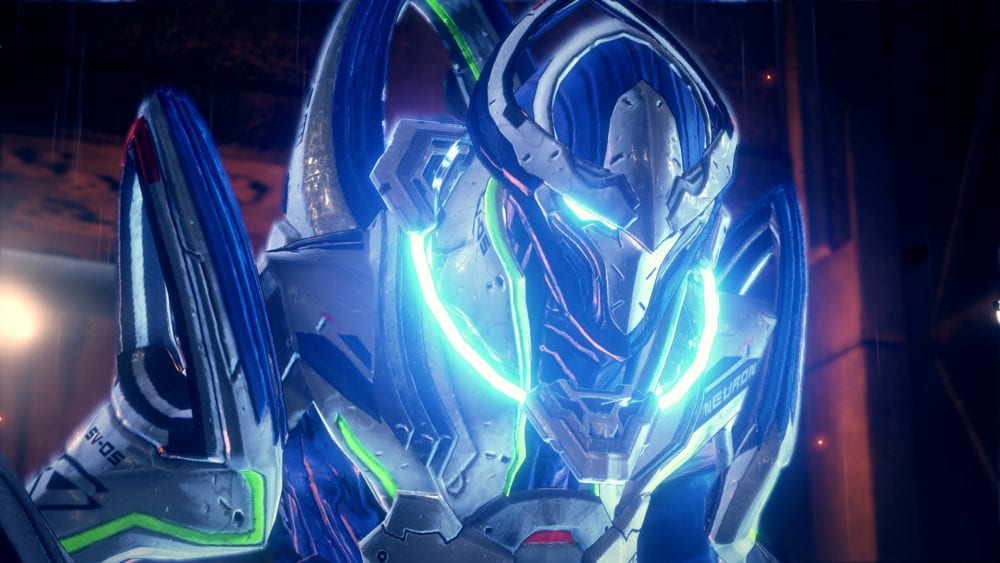 Astral Chain is filled with absurdly over-the-top boss battles, many of which can be incredibly challenging. As you progress through the game these battles will get harder and harder, and facing down the mighty Axe Nemesis is a particular stand out. With that, here’s how to beat the Axe Nemesis boss in Astral Chain.

How to Beat the Axe Nemesis Boss in Astral Chain

You’ll probably notice when you start the battle that the Axe Nemesis has a massive barrier shielding it from any damage you cause. Your first order of business is to bring this barrier down.

There are two ways of damaging the barrier; the Arm Legion’s attacks will damage it, and any attacks from your Gladius sword will damage it.

Focus on using both of these while avoiding the boss’ sweeping attacks until the barrier is down.

Alternatively, you can have your Arm Legion pick up any of the glowing crystals and throw them at the boss. One hit from a crystal will instantly bring the barrier down, but it can be tough to get off due to the time it takes to pick up and throw the crystal.

Once the barrier is down, we’d recommend switching to either the Sword or Beast Legion as they are much faster at attacking and better at comboing than the Arm Legion. Also switch to your normal X-Baton weapon for faster combos.

Whenever the Axe Nemesis plants a glowing axe into ground make sure to stay away from it, as the next attack the boss will do a massive strike that hits straight ahead and makes the glowing axe explode.

The other attack to watch out for is when the Axe Nemesis starts spinning around and moves toward you. Don’t even bother attacking at this point, just continuously use the B button to dodge out of the way.

Eventually, the boss will plant its sword in the ground and make a bunch of glowing spots appear around the battlefield with an area-of-effect. You can’t avoid the attack so what you need to do is switch to the Beast Legion and have it dig up at least one of the spots to make it disappear.

This will give you a safe area to stand in while the others explode.

Also keep your Beast Legion handy for when the boss jumps up into the air and then slams down creating a whirlwind. When that happens, jump onto the Best Legion with L and run in order to avoid being blown into the explosive bits that line the area.

Other than all that, just keep pounding away at the Axe Nemesis and avoid its sweeping attacks. The boss might bring up the barrier a couple more times, making you switch to bringing it down again.

Once you’ve beaten the boss, you’ll have a shiny new Legion of your own to use.

That’s everything you need to know about how to beat the Axe Nemesis boss in Astral Chain. For even more tips, tricks, and guides make sure to search Twinfinite, or check out our expansive Astral Chain guide wiki. We’ve also listed some other helpful guides for you down below.