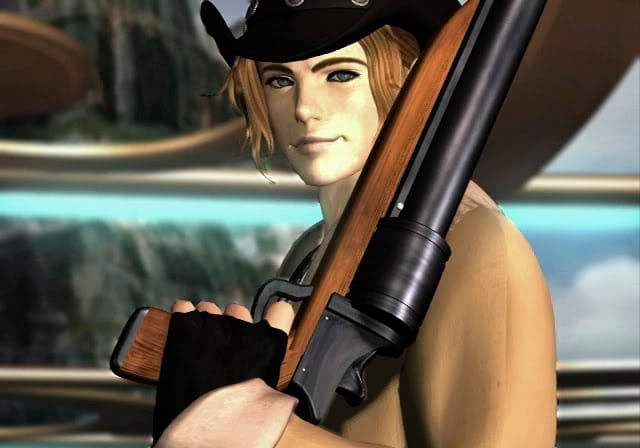 JRPG parties have, since time immemorial, been made up of all kinds of heroes that fate has drawn together to save a world from darkness… but there is always that one character we could probably do without. Totally useless, they are an active drag on a players psyche.

Hope is one such. He loses his mother in a futuristic fascist purge, which is a pretty rough card to be dealt in the opening moments of any narrative… but does he have to be such a baby about it?

He proceeds to spend the majority of the first game blaming Snow for his mother’s death and plotting revenge against him. Finally, after getting really worked up over it, Hope confronts Snow and ultimately accepts that it was, you know, the fascist’s fault.

Also, he wields a boomerang, which is a weapon that is super cool in real life, but kind of ridiculous even in a series renowned for ridiculous weaponry

Imagine, if you will, a character that speaks and acts like Jar Jar binks, but instead of playing a supporting role in a 2-hour movie he is your constant companion in a 100-hour epic role-playing game.

Tora is a Nopon, a race of creatures with ears that also function as hands and a manner of speaking which, depending on your interpretation is either cute or the most annoying thing imaginable.

Unable to become a Driver, Tora uses his mechanical acumen to construct an artificial Blade known as Poppi. His entire arc essentially revolves around encounters with Lila, another prototype artificial blade constructed by Tora’s father Tatazo, who you will rescue in the back half of the game.

Supposedly comic relief, Tora exists only to provide exposition and your party with someone that fulfills the tank role. He succeeds at the latter.

Apparently as punishment for purchasing their game, the developers of Star Ocean: The Last Hope decided to make the key feature of Lymle’s personality the fact that she ends almost every sentence with “kay?”

Completely irrelevant to the plot of the game, she functions as the party’s caster, and there at least she isn’t totally useless. Due to the death of her parents and the encroaching petrification of her grandfather, Lymle delivers every line she gets in a flat, deadpan manner, which doesn’t help matters at all.

This one really hurts, because Irvine is a likable enough sort. He fancies himself a real ladies man and, sporting cowboy boots, ponytail and a western-style hat, who can blame him.

He brings some great moments of levity to the party, but his uselessness stems from a particular character beat right at the end of the game’s first act. Reputed to be a peerless sniper, the party recruits Irvine to assassinate the witch Edea during a military parade in Deling City… its pretty dark, even for a game about child soldiers.

When the moment comes to make the shot, Irvine cracks under pressure and shows that his carefree persona is really just an act. After this moment, he ceases to be of any real relevance, existing only to deliver one-liners and to make women uncomfortable.

Jade Curtiss – Tales of the Abyss

Jade Curtiss is an enigmatic party member, sarcastic, cold and at times almost cruel. Although adept at masking his deepest feelings, he hides the deep he feels for the many people he has killed during his service as a Colonel in the Malkuth military, and through his experimentation of the Fonic arts.

The problem with Jade is that he isn’t really relevant to the plot. Sure, everyone has heard of him and his fearsome reputation but doesn’t really do anything outside of offering witty banter and intimidating others with his eery smile. He is, however, nota totally useless combatant, and at least makes up for his narrative shortcomings on the battlefield

More of a meme than a character at this point, Edward is the crown prince of Damcyan and the one and only Spoony Bard. More concerned with playing his lute than, you know, preparing himself for the burden of leadership, Edward is a useless and ineffectual fop, through and through.

He has some utility in battle, but his arc in the narrative mostly revolves around not being strong enough to protect those around him. He spends a good portion of the mid-game wounded and in hospital, playing his harp and complaining about his many shortcomings.

Peco is a mutated member of the grass tribe, essentially a sentient onion. So, you know, he has that going for him at least. He can’t speak, and his intent is divined by Ryu’s observation of his facial expressions and strange grunting noises, and so, of course, he must serve as the game’s comic relief.

His relevance to the plot revolves around his being a fragment of Yggdrasil, and the party is able to converse with the world-tree through Peco. So, for those keeping score, he is a useless onion-man through which you can speak to an actually useful sentient tree. Video games, amirite?

I actually like Vaan and Penelo, but once someone pointed out the fact that their relevance to the game’s plot ends after the first hour of gameplay, its something that is hard to unsee. They exist to be conduits of exposition, through which other more relevant characters relay scraps of world-building and in-game lore.

Final Fantasy XII is clearly Ashe’s story, or maybe Basch’s. Balthier makes a couple of wise-cracks about this along the way, and you could even make the argument that its really about all three of them. Hell, even Fran gets more character development, and she is essentially the Chewbacca to Balthiers Han.

A lot of the problems people have with Ken stem from the fact that he is this 10-year-old kid that is dealing with incredibly complex and dark concepts like betrayal, murder, and revenge. It just seems unbelievable, even in a game where high school students shoot themselves in the head to perform magic attacks.

His greatest sin, of course, is causing the death of Shinjiro, a much cooler and more capabale member of SEES, and his constant maudlin attitude doesn’t help matters at all. His quest for revenge is all-consuming, and only after Shinjiro dies does he learn his lesson and start to change his tune, but by then the game is virtually over.

When I think of useless party members in JRPG’s, Quina is always the first to come to mind. I don’t quite know what it is about this strange, anthropomorphic frog-creature that irks me so much, but here we are.

The entirety of Quina’s personality revolves around food and the pursuit of culinary pleasures. Seemingly unphased by any of the monumental events taking place around her, Quina is singleminded in her life’s work: the consumption of any all foodstuffs to the exclusion of all else.

If all this talk of JRPG’s has you in the mood to dive into a lengthy epic be sure to check out our lists of the Top 10 Best JRPG’s on Nintendo Switch and Top 45 Best JRPG’s on PS4.