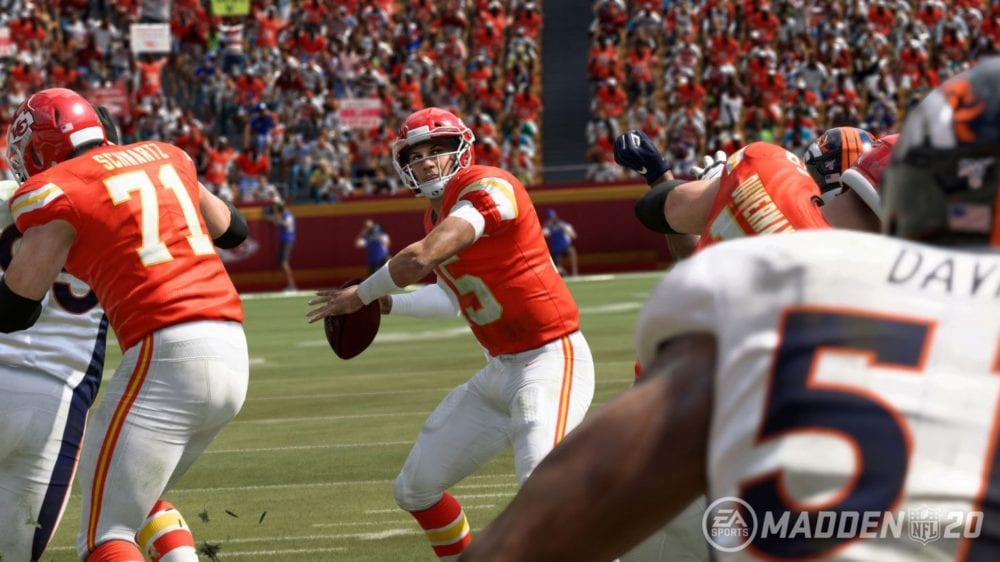 Over the last two years, I have been quite impressed with the effort going into the yearly Madden games and scored it appropriately. EA Sports and Tiburon were taking stabs at making significant, noticeable, improvements to each of the core game modes while also taking chances with new ideas like Longshot. So obviously I had high hopes for Madden 20.

There was going to come a point though where this innovation year after year could no longer be sustained; Madden 20 is that year.

We’re at the end of this console generation so it’s not entirely surprising to see the pace of progress slow a bit. However, what hurts Madden 20 more is that not only do the improvements feel minimal compared to previous years, Madden 20 also takes a few steps back in some areas that may divide and frustrate some of the player base.

The disconnect starts with the theme for this year which is introduced right away to the player: the return of the Pro Bowl. Madden 20 hypes this up right at the start of the game as some kind of major new feature.

Anyone that follows the NFL seriously knows that the Pro Bowl is a total joke. The announcers in-game unironically point out how the Pro Bowl tends to have high scoring games and never acknowledge that the reason for that is that none of the players care to actually try.

And fans, uninterested in watching an exhibition not even played at half-effort, haven’t taken the Pro Bowl seriously for decades. There’s a reason the NFL has experimented with a trying to find a format that isn’t a total bore over the years.

So this “triumphant” return of the Pro Bowl falls super flat, and just left me feeling like EA was either asked by the NFL to hype the Pro Bowl up, or that they were desperate to find something to get players excited about this year and in either case, it left a weird taste in my mouth.

There is at least one aspect of the Pro Bowl theme that makes sense though, a vehicle to introduce what is Madden 20’s most notable new feature: Superstar X-Factors. 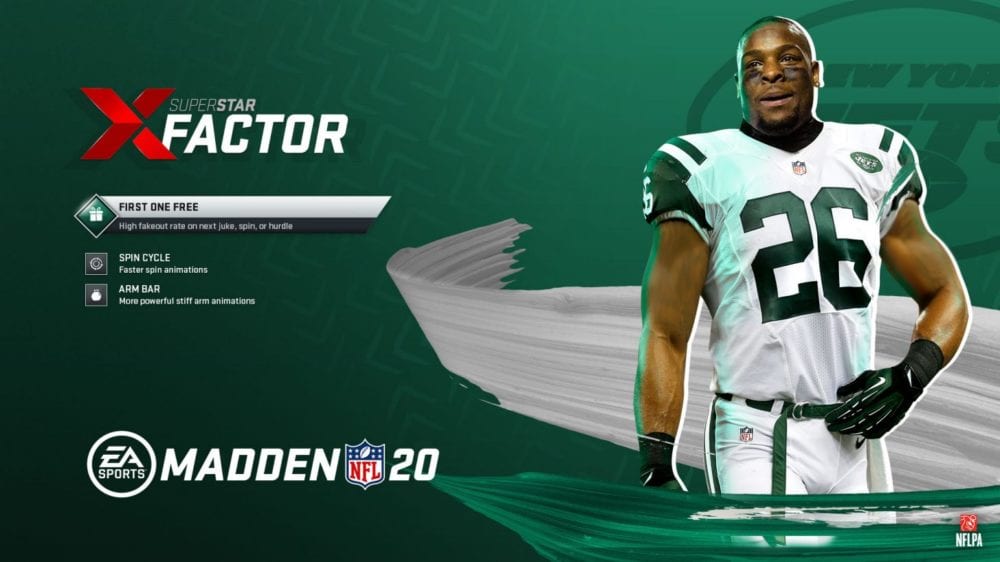 X-Factors are a curated list of elite players chosen by the developers. These players receive special perks called Superstar Abilities that can give them a significant boost over other players in their position along with a single Zone Ability which is an additional super perk essentially.

There is also a second tier of just “Superstars” that don’t receive the special Zone Ability but still have a couple of Superstar Abilities.

You’ll know who these players are as they’re marked by a big X on the field; you can look them up in the game’s menu, and load screens feature one player alongside some corny, self-absorbed quote from a mysterious “Madden Ratings Adjuster.”

Combined with the comical levels of hype for the Pro Bowl of all things, these silly load screens create a feeling that Madden is really just up its own ass this year.

That aside though, X-Factors are actually a neat concept that have a surprisingly noticeable effect on the field. Going up against a supercharged QB is quite frightening, and likewise, it was quite fun for me to see my players just go Super Saiyan in a game.

It definitely accomplishes the goal of making the superstars of the league stand out more and personally, I found it to be pretty damn cool.

That said, I don’t see this being universally unproblematic. It’s a further expansion of RPG-like elements that aren’t going to be for people that want a strict football sim experience that isn’t affected by extraordinary perks such as these.

Zone Abilities are present in offline modes and the Superstar Abilities are in all modes including Ultimate Team which replace the chemistry abilities.  You can turn this off in Franchise in your league settings if you hate it, but if that’s you, then you’re basically removing the most notable new change for Madden 20.

Aside from X-Factors, there are some other gameplay changes that range from great, to odd, to bad.

Let’s start with the good stuff. Madden 20 looks great! Visually it’s another banner year, and player animations, while still weird at times, continue to make improvements towards being more realistic.

My favorite improvement is to passing, specifically deep balls. It’s hard to describe in words but the arcs on long throws are just so satisfying to watch now and WRs and DBs seem to attack the ball more naturally.

I used to avoid deep passes because it just didn’t feel fun or effective to throw them as they would just kind of drift around and then pop off a player helmet or something. Now though, they are dramatic, fun to throw, and impactful.

The pace of play though feels off though. Games run very fast and the ability to tinker with the game speed has been inexplicably removed.

I found this especially noticeable in Madden Ultimate Team where I had to go out of my way to play extremely unnaturally such as letting the other team score instantly just to have a chance at having enough time to complete my goal.

Immersion elements such as players walking up to the line of scrimmage and even referees are gone for some reason in Madden 20.

You just pop up at the line and hike the ball now. If you’re doing a no-huddle the game will inform you how much time has run off while you magically appear at the line.

It’s just weird and feels directed at making online games faster which is a good thought, but this applies to all modes including offline ones.

While other sports games like MLB The Show continue to make their presentations more lifelike, Madden 20 decided to roll some things back. This is further compounded by the occasional glitch, questionable CPU AI, wonky animation, and announcer flub that all rear their ugly head often enough to the point where it’s noticeable.

Face of the Franchise QB1 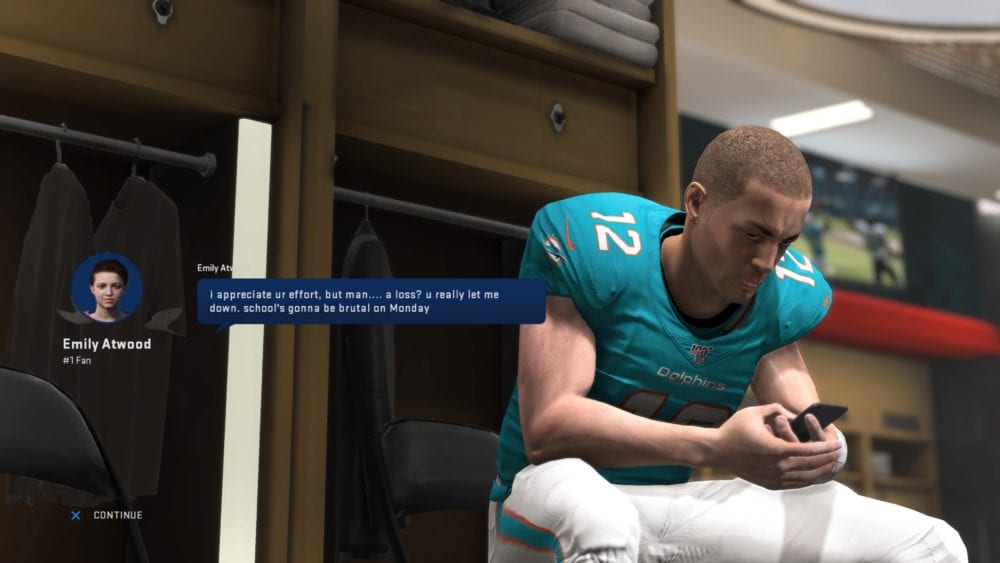 Emily, I barely even know you, please stop texting me.

Face of Franchise replaces the Longshot story mode that was present in the last two games. While it’s a bit sad to see Longshot go because it was a guilty pleasure of mine, I’m not entirely surprised. It was unrealistic to expect it to last forever.

Face of the Franchise is… fine. It’s essentially a glorified – though an admittedly more interesting – version of playing franchise with an individual player.

You create a player (a very ugly one considering the lack of good customization options) and go through a short (60 min ish?) story segment that sees you select a real blue blood American college football program (neat!).

You then fast forward to the semi-finals of your senior year where you’re thrust into the starter role after being the team’s backup the entire time.

Your actions on and off the field from that point until the NFL Draft will determine where you get selected. You can be anything from a first-round pick, to going un-drafted. Depending on where you go, the amount of slack you have once you enter the NFL is longer or shorter.

It’s laughably easy though to win the National Championship. I literally just ran the same play almost every time, a streak route to the #1 WR who caught it for a touchdown or at least a 60ish yard gain almost every time.

You’re basically unstoppable throwing it to that player, so you’d have to go out of your way to set up a difficult scenario for yourself.

There’s really not much else to it. Jack Ford makes a return as one of your college coaches which is a nice touch. There’s a cringy interaction with a sick fan that has no-context to it before it happens, and suddenly your life seemingly revolves around making this person happy.

She will annoy you from time to time about winning games so her friends don’t make fun of her, and then admonishes you if you fail like I care what Becky from Biology thinks.

You might get a completely out of character text from Tom Brady every once in a while as I did before my second pro game. You’ll progress quickly, provided you don’t try and sabotage yourself; you’ll become a star, win some Super Bowls maybe and that’s basically it. 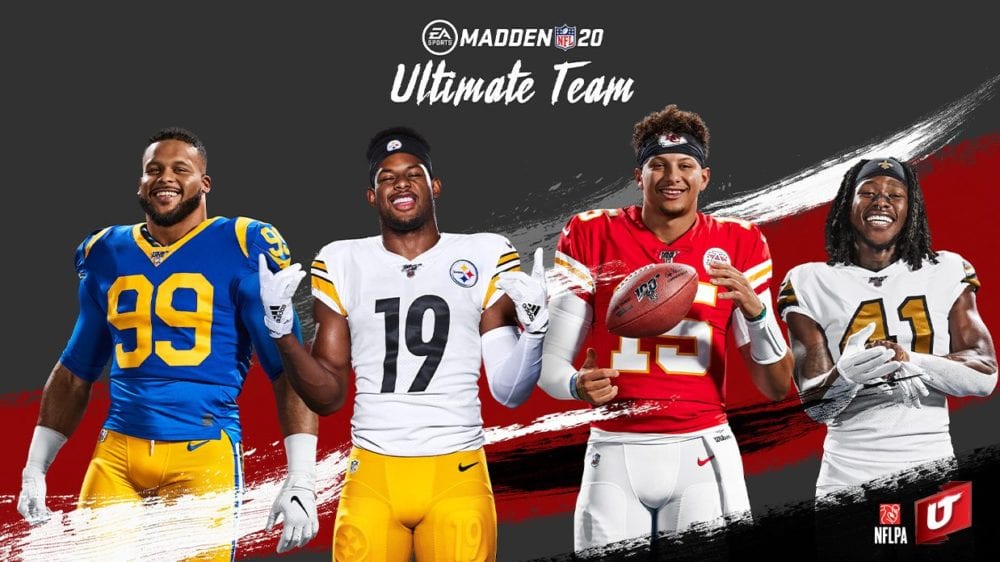 Finally we arrive at Franchise and Madden Ultimate Team, and honestly… there’s not a ton to say. Franchise benefits from the addition of X-Factors if you liked it like I did.

Over time players can progress into superstars which is a neat touch and you have more control over how players develop and can adjust things like XP rate for certain positions in the sliders.

There’s the Scenario Engine which generates situations for you to tackle such as player holdouts, delicate injury management, etc. It’s a good start, but it still boils down to some pretty basic management.

It’s a net good addition for sure, just don’t expect it to dramatically change the way you approach franchise.

Grinding in Ultimate Team has been made more streamlined. Missions are a new feature which basically are a more organized set of things you need to do to progress your Ultimate Team.

So for example, the NFL Epics Mission will show you your progress towards specific players, and then when you click in, will direct you where you need to go to continue to work towards a card you want to unlock.

It’s easier now to quickly run through a set of challenges, and new to Madden 20, you can set difficulties on the fly as you work through each one in order to set how much of a reward you want to earn and you can do that without having to return to the menu. You can just knock out challenges one after the other very quickly which is a great (long overdue) addition.

Also, as mentioned above, Superstar abilities will work their way into Ultimate Team as well. Other than that, the modes MUT head have grown familiar with over the years are all there.

That’s not an exhaustive list of every single new feature for Franchise and Ultimate Team in Madden 20, but it’s the highlights and honestly, it’s a little underwhelming.

What it comes down to is that Madden 20 is still a fine football game, it’s totally functional and fun to play.

It just doesn’t have a whole lot of “wow” new features this year and I can’t as easily recommend it to everyone as a worthwhile upgrade like I could the last two years.

Madden 20 takes a few steps forward in some regards but also takes a few – weird – steps back in some areas. It tinkers around with its core game modes without messing anything up, and there are some improvements that hardcore fans of a particular mode will definitely appreciate but more casual ones may not even realize weren’t in the game prior.

If you’re a hardcore fan of MUT and Madden 20’s online modes, you know the deal by now; $60 to sign up for another run of building up your team. Unless EA decides to royally screw up the gameplay (which isn’t the case here), there’s always going to be people that pick up the new edition every year no matter what regardless of what others have to say.

But if you’re a offline player, or someone that invested a ton of their personal time into their MUT team last year and aren’t ready to give it just yet, consider holding out for some content updates to MUT to make it feel a bit meatier, or just waiting until next year entirely if you can stomach a year off.

Just like skipping out on watching the Pro Bowl, you’re not missing out on all that much.