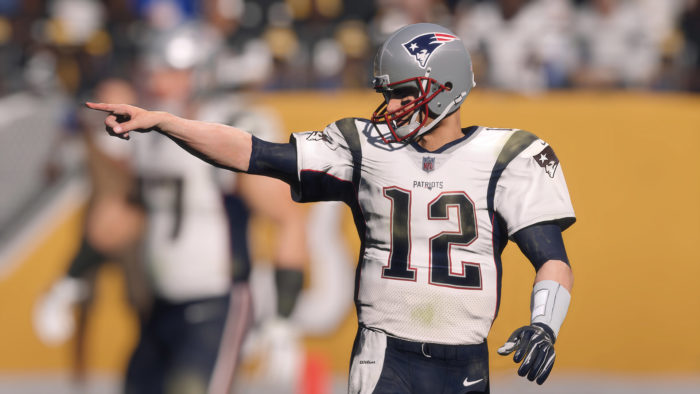 This is my third year in a row tackling (heh) the Madden review for Twinfinite, and this time, well, it was different. A lot different. This year, EA Tiburon threw fans and reviewers like me a curveball (a Football equivalent is escaping me, but work with me here, I’m more of a Baseball guy), and added a story mode for the first time ever to Madden, known as Longshot. It’s clear a lot of effort and time went into Longshot based on the lack of radical changes around the game’s other premiere game modes such as Franchise and Madden Ultimate Team (MUT). This is a bold and risky move, and honestly, it kind of paid off especially if you’re someone that has grown weary of the same old each year.

Longshot follows the story of Devin Wade, a Texas High School Football star that makes it as far as playing Quarterback for the University of Texas, but a tragic car accident that kills his dad causes him to question his dedication to the sport. He eventually quits the team and joins the army, and Longshot picks up on Wade as he’s getting his second chance. An opportunity to compete on a reality show that follows a late-round draft prospect and his journey to the NFL.

You might be thinking to yourself, “Wow this sounds really cliche and corny,” and, well, it absolutely is, but thankfully Longshot doesn’t take itself too seriously. Rather than try to pretend like they are creating the next great sport story, Longshot embraces sport-movie stereotypes and just amps them up to 11. Everything from flashback games to high school glory days, playing with the troops, seedy TV executives, cameos from ex-stars like Dan Marino and Chad Johnson; it’s all there and Longshot doesn’t shy away from it. It also doesn’t shy away from product placement either though. I see you Bose. 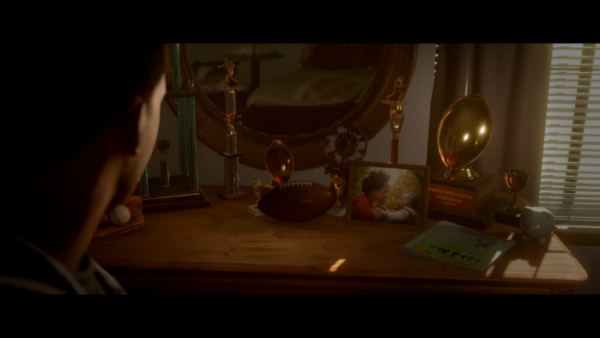 If you’re like me, you might roll your eyes the first time Colt Cruise (AKA the Cruise Missile) your lifelong friend and teammate gives you one of his cornball pep talks, but by the end I really was rooting for them. The characters in Longshot really are quite likable. Everything about Wade’s relationship with Cruise, and the other characters in Longshot such as his coach and mentor Jack Ford, are heavily dramatized, but you know what, cliches are cliched for a reason. Not everything needs to be highbrow, and Wade’s story was entertaining gosh darn it.

Throughout Wade and Cruise’s journey, your performance is ranked in two ways: your Football IQ, and your performance on the field. There will be opportunities throughout the story to impress coaches and scouts with your knowledge about Football (such as formations, play calling memorization) and whether or not you make smart on-the-field decisions. This aspect of Longshot was actually quite challenging, and unless you have intimate knowledge of Football (or Madden at least) you might struggle with keeping a high IQ grade. Also complicating this, is that the smart call was usually the emotionally difficult call. Your performance grade is improved by just going out there and playing well. Actual in-game scenarios were easy for the most part and there was some scenarios unique to Madden that reminded me of pickup games I used to play after school which was a nice touch. However, some of the skill based mini-games were boring and repetitive. Luckily they were few and far between. 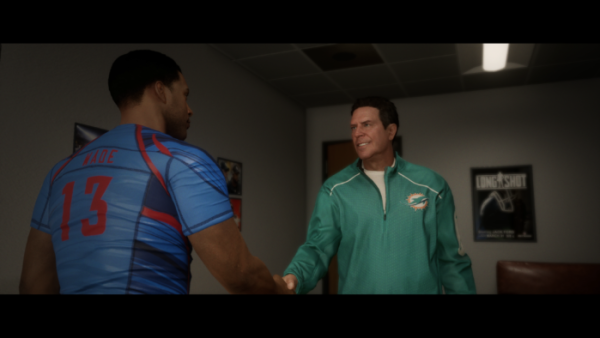 And finally, believe it or not, Longshot actually holds a decent amount of replay value. It doesn’t run too long thankfully. An afternoon/evening will get you through it. However, there are lot of choices that you can make that affect the outcome of the story. No, we’re not at Telltale Games-level of choice making here, but it was intriguing enough that I wouldn’t mind giving it another go one day to improve my scouting report and see how some other choices would change how the story played out.

Longshot is the most noticeable addition in Madden NFL 18, but it isn’t everything. Gameplay-wise, Madden NFL 18 continues to build on the refinements to specific positions while giving more tools to higher skill fans to play with. Like the RB control additions last year, players can take advantage of a new feature called Target Passing to provide better accuracy to their passes and rely less on luck. However, this seems aimed at the hardcore players, as it’s quite complicated to use, and is now part of a pattern that I’ve been noticing over the last few years. Tiburon and EA Sports have been very supportive of their esports community, so its not surprising that they are looking for ways to enhance that side of Madden NFL 18, but for people who don’t care about having that level of control and just want to play regular ol’ Madden, they are kind of left out from experiencing at least some of Madden NFL 18’s most touted new features.

What I do appreciate though is that EA Tiburon clearly recognizes the wide variety of people who play Madden NFL 18 and added three “Game Styles” for players to chose from, which tailors their Madden experience to their liking. A lot of people are never going to touch MUT and/or play online competitively, and are literally just here for the roster update for their favorite team in Franchise and the improved graphics powered by Frostbite. People who just want a fun, laidback experience where they can just lob bombs all day can choose the Arcade game style. Others that enjoy a more realistic experience but one that doesn’t require a high amount of skill can roll with Simulation.  Players who play online a lot and are used to micro-managing individual players can opt for “Competitive.” While online and tournament matches default to Competitive still always, at least when you’re playing offline, you can have a Madden that better reflects your preferred play style. 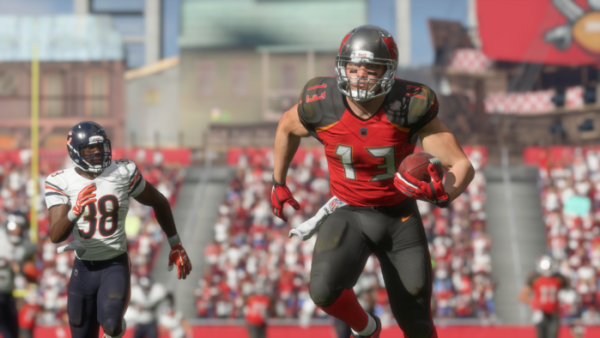 Another neat addition that allows you to better refine Madden to your personal play style is Coach Adjustments. These are settings that can be toggled, that allow you to fine-tune the AI to fit a strategy that you come up with. Such as instructing Cornerbacks to opt for swatting the ball, or to aggressively pursue the pass rush. The in-game prompt will give you pros and cons to each, so you can play around with different strategies and see how that affects your players.

At the end of the day though, EA Tiburon continues to invest a lot of its energy in its extremely popular (and presumably lucrative) MUT mode. For the last few seasons, the development team has continued to add more ways for you to play with your fantasy team, and this year is no different. Most notably is the new MUT Champions Weekend Leagues which will provide a hyper competitive environment for MUT players. If players perform well during the week, they will be invited to compete in a special league with other qualifying players to potentially earn huge rewards. There are even more solo challenges that the online adverse can complete, including Longshot cross-over challenges to conveniently transition Story Mode fans into Madden NFL 18’s MUT world filled with optional micro-transactions. Seriously though, MUT really is loaded with new and returning features, and even has a new co-op mode, MUT Squads, where players can combine their cards and form a team, working together to each take up different sides of the ball, including play calling. There is a lot you can do with your fantasy team and that’s really great for those that prefer to spend their time in MUT.

Last year, I said that Madden NFL 17 was refined, yet was lacking something. Something that could shake the series up. Well, this year they took a gamble with Longshot and it paid off. That said, I don’t think it would be wise for EA Tiburon to try and make Story Mode their flagship mode going forward. I can see it getting tiring and grating year after year. But let’s live in the present and worry about next year later. For right now, enjoy the freshest, prettiest, and most refined Madden NFL game to date. If MUT is your thing, it’s loaded with new toys and modes for you to play in. If you prefer toiling away in Franchise, that’s still intact, and still benefiting from new additions made in recent editions of Madden NFL, plus some additional less-sexy refinements made this year. And if you wanted something new, you got it with Longshot. Give it a try and you might be surprised how much you like it.