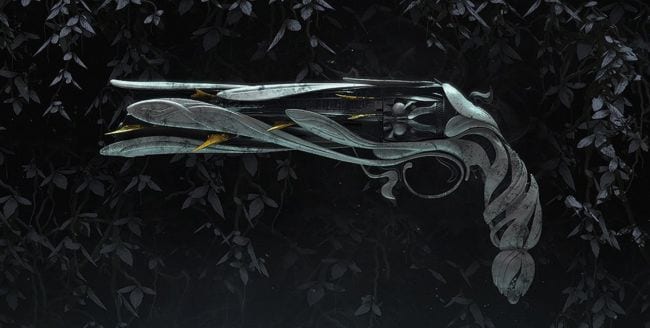 Fans of Destiny 2’s lore are being delivered a treat today by way of a new exotic quest. The Lumina Exotic Hand Cannon is on its way to Destiny 2, and it will take you down a path that involves obtaining the mysterious Rose, a legendary weapon wielded by Shin Malphur before it was turned into Thorn. Here’s how to start the Lumina exotic quest in Destiny 2, along with steps with what to do next after that.

How to Start Lumina Exotic Quest in Destiny 2

1. Return to Where You Found Thorn

The Lumina quest line is connected and similar to the Thorn quest line. You don’t need it but you will need to go back to the same location. If you’re missing it Thorn here’s our guide for Thorn if you haven’t done that yet.

To start the Lumina & Rose exotic quest proper though, return to the campsite where you can find Thorn. Our Thorn guide above has detailed instructions including pictures of where you’ll need to go to find the campsite if you need them, but here are the cliff note directions if you need them.

Go the EDZ, spawning in at the Trostlands. Go north, and enter the Salt Mines.

Follow along the path until you reach a room with a big blue barrier blocking the way. You can’t cross that, but you can go around it. Look up to the rafters towards the right of the room and you’ll see a different pathway.

Follow that until you enter another open room. In that room to your right when you enter, is a trasmat pad with a rocket ship looking construct in front of it use it.

You’ll be taken to an outside area. Follow along the path that is before you here until you reach another blue barrier. Once again, you can’t cross it. To the left of it, there’s a ledge, walk along it and you’ll see a very small cave passageway.

Go through that passageway and you’ll end up at a campsite, this is where you want to be. Go past the campfire until you see a chest. Open it and the quest will begin.

The next step in the Lumina exotic quest line will have you going to a lost sector to to find a chest that will contain rose. It’s going to vary from person to person and will change every hour.

Figure out where you need to go and go there quick and start searching the area in and around the Lost Sector until you find a unique looking chest.

3. Generate 250 Orbs of Light and Getting Rose

This one is as long, and straightforward as it sounds. Go generate a bunch of orbs of light. Personally, if I were you, I’d go to Mars and fire up escalation protocol as that is a consistent source of hordes of red bars, orange bar, and boss-class enemies nonstop.

And of top of that, other players can often generate orbs for you so you can get your super back faster to generate more of your own. Blind Well could also work too for that matter. Whatever you feel is best, go for it. This will earn you Rose. The next three steps are all linked together into one.

4. Run Nightfall and Get Over 50k Points

Once again, pretty straightforward. Simple run a Nightfall and score over 50k. Save yourself the headache and try and find two other people to run it with, and modify it.

For this next step, you’ll need to complete waves of the above activities until you reach a point value. I’d stay away from Escalation Protocol because it can be a bit inconsistent in terms of clears unless you’re doing it with a clan.

Blind Well is likely the most efficient way, but Black Armory can suffice too especially if you want to complete some frames and kill two birds with one stone.

Finally for this part in the Lumina exotic quest line, you need to kill 100 enemies without reloading. Obviously they don’t mean all in one shot. Kills just count towards this progress when they are all within the same clip. Obviously guns with large ammo capacity such as heavy machine guns work best here.

For this one, you’ll need to complete a progress bar that fills up when you complete activities meant for teams. The more players, the better. Your best options here are either Black Armory forge runs as they can go pretty fast, usually much faster than strikes, or The Menagerie which is longer but has six people in it. If you don’t mind PvP, the Crucible works as well.

8. Run a Modified Version of Will of the Thousands

Yes, that annoying strike/mission from Warmind with the giant worm god Xol is the next step in the Lumina exotic quest for Destiny 2. The catch for this one though is that you need to use Rose to destroy purple crystals that are located in this modified version of the strike. Below is a YouTube video guide from user xHOUNDISHx that you can use to find them all.

It’s absolutely crucial that you do get everyone single crystal kill, and with Rose, otherwise it won’t count.

This next task for Lumina in Destiny 2 is the pain in the ass, especially if you don’t like PvP stuff like Crucible and Gambit. Bring your best sweaty Hand Cannon into quick play and get all the kills you need. Straightforward, but if you’re not a PvP or not a fan of Hand Cannons this one could get ugly.

Finally, just generate orbs of light for allies. Once again this is easy, join a game that matchmakes you with teammates, like Crucible or Strikes, and use a masterwork weapon/roaming super. I would suggest running Hollowed Lair with a masterworked Huckleberry and just non-stop head shot all the red bars that show up during that strike.

That’s all you need to know for how to start and finish the Lumina exotic quest. Best of luck with this lengthy exotic quest line!