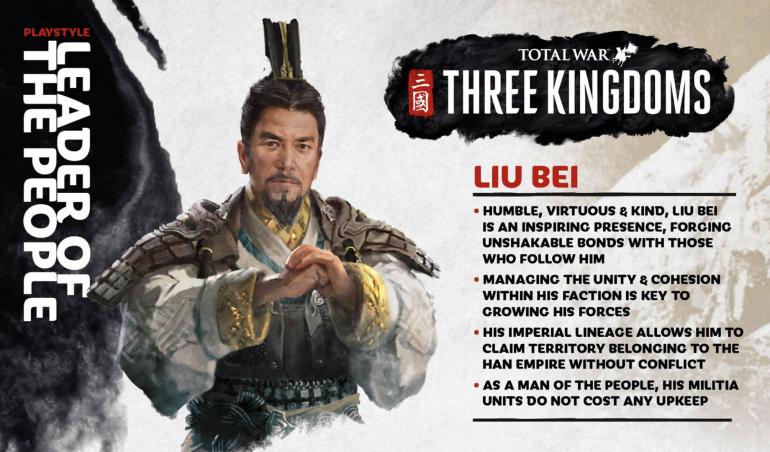 Liu Bei, the Virtuous Idealist, Imperial Uncle. You could make the argument that the Romance of the Three Kingdoms is his story and, and if Cao Cao is its villain, then Liu Bei is the hero. Noble, often to a fault, he is a lord worth following, and his most loyal generals are some of the most formidable in all of China. Here’s how to play Liu Bei in Total War Three Kingdoms.

How to Play Liu Bei in Total War Three Kingdoms

Playing him in the grand campaign is an interesting experience, as you have limitless options. The only warlord that starts without a home city, Liu Bei also has the most powerful army on turn one. This means you can travel anyone where on the map and carve out a region from himself.

His unique mechanic, Unity, allows him to annex Han provinces due to his Imperial ancestry, which can save you assaulting walled cities, simply walking in and commanding their loyalty.

On your first turn, deal with the Yellow Turban rebels and take over the Iron Mine in the Dong commandery. End your turn, and on the next begin to reform the forces under your command. Beginning the game with both Guan Yu and Zhang Fei means you have a clear edge over your closest neighbors, and you need to strike hard and fast to make the most of it.

Make sure to swap out the Yi Marksmen that Liu Bei has in exchange for regular Archer Militia. The reason for this is that Liu Bei gets a 50% upkeep reduction for militia units, and can actually employ five regular units for the same upkeep as a single unit of Yi Marksman. While we are at it, swap Liu Bei’s Sabre Cavalry for Sabre Militia Cavalry, for the same reason.

Follow the direction that your initial quests push you in, and take the city of Langye by annexing it. If your neighbor to the north, Kong Rong, has taken the minor settlements of Langye commandery, then about face and take the city of Dong from Huang Shao. If he hasn’t, snap them up for yourself and move north through the peninsula.

Around now, Liu Bei’s event involving Tao Qian should pop up. Accept it, and you will confederate his lands in exchange for going to war with Cao Cao. It’s worth it, as this early in the game Cao Cao is likely to want peace after a skirmish or two.

Once this is settled, return your attention to the north, and take the fight to Kong Rong. While he can make a very loyal ally and great trading partner, his lands are far more valuable and will provide you with a strategic base from which to expand.

From here you have many options. Expand north, towards Yuan Shao and take his fertile farmlands. This option is tough, as he is likely to put up one hell of a fight. Taking the coastline to the south is a safer option, but you may find yourself overextended. You could also push south-west, into Cao Cao’s lands, which are rich and fertile. Again be prepared, as he won’t give them up easily.

That’s it, everything you need to know to get your Liu Bei campaign off on the right foot. Be sure to check out our other Total War coverage for plenty of other helpful guides such as How to Play Ma Teng, How to use Spies, and Best Retinue Compositions.

For more on Total War: Three Kingdoms, check out our full review of the game here.