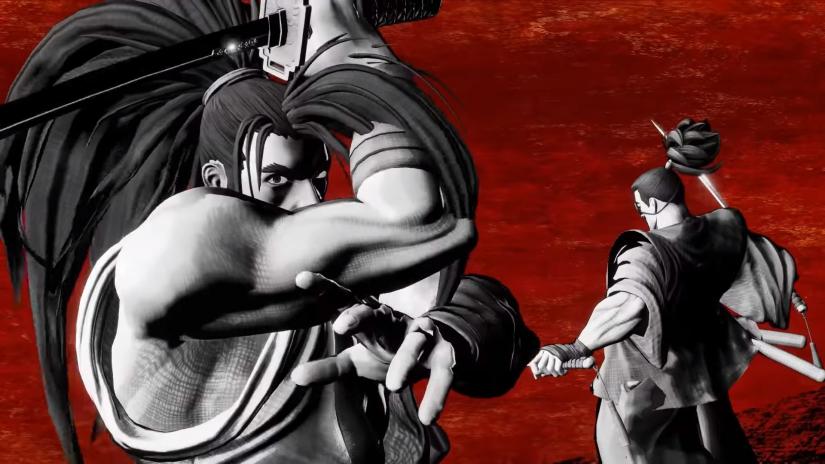 As swords clash and blood spews, Samurai Shodown is not as flashy as its surface portrays and instead, it demands patience and methodical play.

Within the last five or so years, fighting games have focused on a more fast-paced style of gameplay with an emphasis on rush-down and fairly simple to use comeback mechanics. This revival of a cult classic series from SNK strives to separate itself from this trend.

It does so by focusing less on combos and more on giant slashes and special moves that have a lot of animation to them. For example, when you strike your opponent with a Heavy Slash, both you and the opponent really feel it as they reel back from the impact.

Personally, I find this style of gameplay to be quite refreshing.

Even though I’m a big fan of fighting games with long combos such as the Marvel vs. Capcom series, Samurai Shodown opts to forgo long combos for normal and special moves.

You may think you have a large life lead in a match, but all the characters have the potential for some unbelievably damaging attacks that can change the tide of battle in an instant.

This fresh concept created thrilling battles I wasn’t used to before. Instead of focusing on nailing down a long combo string, I had to focus my attention more on learning my character’s attack distances, while always keeping in mind where I was on the 2D plane in regard to my opponent.

Samurai Shodown offers 16 characters to choose from (13 returning and three newcomers), all offering their own unique play style. The 13 returning characters come from previous entries of this franchise, bringing with them their signature moves in a new 3D art style.

While many characters have similar inputs for their special moves, each one caters to how you like to play.

Like to bully your opponent with multiple swords and large slashes? Then Yoshitora or Jubei is your guy. Rather use brute force to get your wins? Then you’d love Earthquake and Tam Tam.

What I like about the game’s roster is the variety. Every character seems to have their own unique personality and reason for fighting. Even newcomers such as the strong-willed Darli Dagger are lacquered with charm.

She also happens to have a long windup sucker punch that can literally take 80% off your health bar if you aren’t careful, so there’s that.

There are also a handful of universal mechanics in this iteration. By pressing Light and Medium Slash together you can perform a dodge that will make your opponent miss their attack and you can follow up with a reversal attack.

If you combine this dodge command with a traditional quarter-circle forward motion, you will get a parry which can actually disarm your opponent, leaving them weaker and without their weapon until they get a chance to pick it back up.

However, you do get access to one more move when you are barehanded. If you input a well-timed parry command while in this state you actually will initiate a super cool looking cinematic sequence where you grab the opponent’s blade with your bare hands while you kick them away, disarming them in the process.

Pulling this off in battle was a rare occurrence, but when it did happen I felt like a badass.

Also returning from previous entries, the signature weapon clashing mechanic is pretty exhilarating. Even the sound effect of both swords clashing has a satisfying clinking sound that immediately gets your blood pumping. I think little details like this really help convey the mood while emphasizing that a real battle is taking place and you’re in the middle of it.

In terms of the game’s story mode, we have a no-frills approach to the formula, offering a series of battles with minimal dialogue to break up the fights.

Once the player reaches the end with their character of choice, the game pits you against an incredibly difficult boss named Shizuka which will test your skills to the fullest. Some may be turned off by this battle as she has an incredibly large heath pool and you have to be blocking constantly while you weaken her powered up form.

For a fighting game released in 2019, the story mode can be a bit lacking. While serviceable and acting more like an arcade mode, it’s hard to ignore when you consider the incredible detail and lore put into the story mode offerings in games like the recent Mortal Kombat 11, Soul Calibur VI, and Tekken 7.

Despite Samurai Shodown probably having a lower budget, I still feel like a little something different, whether with gameplay or more fleshed out cutscenes, would’ve helped improved the mode overall.

Once you’ve experienced the relatively short story mode you can hit up the tutorial and training modes. While the tutorial does a nice job at teaching you the basic mechanics of the game, it could’ve gone into greater depth about the more meta-mechanics in fighting games such as whiff punishing, mind games, and meter management.

The training mode is serviceable as well with all the normal options for practicing situations and you can also record opponent AI actions in case something in a real match ends up giving you trouble.

Unfortunately, for the technically minded, frame data was not available in training mode. Frame data refers to the number of frames of animation (start-up, active and recovery) in any given move.

Another interesting addition is Ghost Mode. Here you can activate a ghost, which acts as a mirror to your own play style. As you play the game, the ghost will be watching you and it will apply your tactics into its own game plan. This ghost can then be used to fight other ghosts or you can seek out famous players ghosts in order to brush up on your skills.

After making a ghost and seeing it in action though, it just didn’t really seem to mimic the way I was playing the game. It typically would just keep jumping back and occasionally doing special moves rather than having a nuanced game plan, and I thought that was a little disappointing.

One aspect that usually makes or breaks a fighting game is its net code. Stability and smoothness during online matches are always desired and over the years many games have delivered some impressive results when it comes to making matches still feel responsive and not a slideshow.

I’m sadly here to report that Samurai Shodown’s online play in its current state is not in the best shape. I did have enjoyment playing online, but it’s definitely not without its fair share of problems.

The game uses a delay-based net code and while many games these days opt to use a roll-back solution, Samurai Shodown is using a bit more of an archaic type of code. Given the 30 or so matches I played online, about half of them had very noticeable lag and ran poorly even when the player’s connection status had a good amount of reception bars.

If you happen to get a bad connection, it’s even worse. The game can begin to run like a slideshow at times, sometimes even freeze-framing as it tries to catch up. This is the main issue with delay-based net code.

Essentially the game will not handle lag spikes well and it’s not the game’s fault as much as it’s the fault of how the game interacts with both of the player’s connections.

I was able to play with a couple of friends of mine to confirm if some of the issues I was having was more of a distance/bad connection scenario.

After running some sets with them I can confirm that I was having a better connection than before but we still had issues cropping up more often than we would’ve liked.

Ultimately, the smoothness of play online is currently not optimized. I’m hoping SNK can patch and fix the net code quickly as it’s a shame when a good fighting game is lacking in that department.

In regards to the game’s visuals, SNK has done a great job here and it shows that their skills rendering in 3D have been improving since their last couple titles.

SNK has always been known for their well-drawn and beautifully animated 2D artwork, but it seems that after working on King of Fighters XIV, the team has hit their stride.

The characters have deep shading and outlines that really make them pop off the screen and the sublime backgrounds really invoke the surreal atmosphere this entry is going for.

The game is also very bloody with massive blood splatter effects during deep hits and sometimes you can dismember your opponent at the end of a round, though the body disappears very quickly.

This is still a Mature rated title but it doesn’t have quite the same level of gruesome-like realism when you compare it to a game like Mortal Kombat 11.

If you happen to have kids or want to play the game without blood and gore, you can easily turn it on and off in the options menu as well, which is a welcome addition that improves its accessibility.

Even the special effects during special moves look quite impressive with huge swatches of color splattered across the screen sometimes with stylistic imagery such as classical Japanese art, traditional Japanese cards, or even various flowers.

The music and sound effects in Samurai Shodown are also superb. Every visceral slice, clash, and action in the game sounds right with the game’s sound effects sounding very distinct and “anime” like, and I wouldn’t want to have it any other way.

The music is a healthy balance of rock and somber tones, though the sound team also has added a Japanese flair to the sound. By adding cultural instruments of Japan to more modern genres of music, the team was able to invoke more atmosphere into these tracks, which in turn makes the soundtrack stand out.

While this may not be the most feature-rich fighting game out there and the netplay in its current state is mediocre at best, Samurai Shodown has still carved its own path in the fighting game space.

I commend SNK for bringing back such a storied series and attempting something bold in a now saturated genre. Its focus on slow-paced, bloody action really sinks its teeth in you once you have a basic understanding of its mechanics.

I think fans of the series will be very happy with the reboot, as it retains a lot of what made the previous entries in the series so beloved in the first place.

Even casual fans of the genre looking for a new flavor within fighting games will find many things to love here as each aspect culminates towards a game that understands its identity and doubles down on its strengths.

As far as modes and what to expect in a fighting game, Samurai Shodown won’t be surprising you too much, but that’s actually okay.

The extra single player modes included such as Survival, Time Attack, and Gauntlet (a mode where you take on every character in the game) are a blast to play and offer plenty of replayability to anyone willing to learn the game’s pacing and systems.

The core weapon-based fighting action brings some fresh and interesting concepts to the table that you really can’t find in any other fighting game on the market right now, maybe unless you consider Soul Calibur VI a fair comparison.

If you fancy samurai mythology with a Japanese ink brush aesthetic and/or you’ve just been looking for a 2.5D style, weapon-based fighting game, I think Samurai Shodown is a very solid choice.