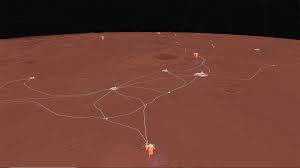 Today at The PC Gaming Show of this year’s E3 we got a first look at the new environmental management sim Per Aspera, with a short look at gameplay.

Developed by Tlon Industries and published by Raw Fury, Per Aspera puts you in the role of a complex artificial consciousness orbiting Mars. Your sole goal is to terraform the entire planet, although as you play you’ll realise that this turns out to be quite the challenge.

You’ll start with a single drone, exploring the planet to gather resources and making strategic decisions on how to optimise the land and your tech, but you can later create massive structures that span across the entire world. As the footage shows, your first goal will be to bring water back to the planet, and from thereon out cultivate an atmosphere and even more advanced life.

Per Aspera aims to mimic the actual challenges the red planet may present to terraformers by recreating its conditions. The gameplay is science-based, allowing you to experience what a real terraforming mission would look like.

You’ll be able to venture to real, geographically accurate Martian landscapes, marked out and portrayed in the game’s detailed yet graphic style. The game aims to give you the freedom of running an entire planet and its ecosystem. The more you research, the more new technology you’ll unlock, including projects based on real-life science.

You can develop your base, expand your research, and put your scientific theories to the test in the game’s sandbox mode. There’s also a twisty single-player narrative mode, where you unravel the truth about humanity’s first mission to Mars.

There’s not a huge amount of info out there yet, so check out the game’s website if you’re interested in the intricacies of the gameplay. We can expect to learn more over the coming months, as Per Aspera is set to come out on PC in 2020.