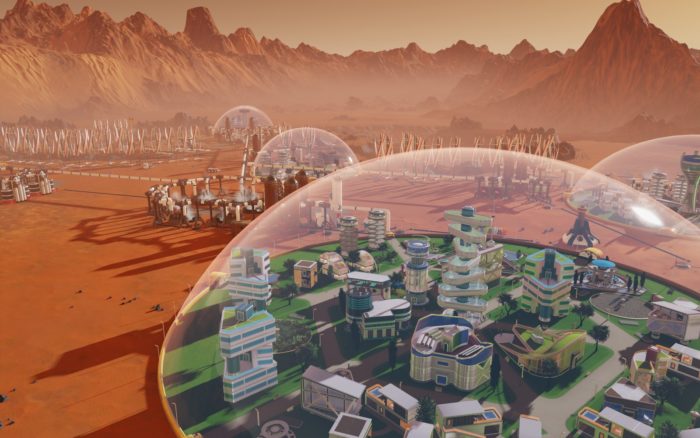 Develop a Plan Based on What’s Around You to Start

All of the tips in this guide are centered around one key point: having a long term plan in mind. In Surviving Mars, what you’ll come to learn is that bad decisions early on can, at best, be annoying to fix later, or worse, come back to haunt you. What you’ll want to do then is think carefully about what your long term plan is for the game based on what resources are available to you right away.

Map out in your mind where buildings such as water and rare metal extractors are eventually going to go, and then make sure that you’re putting power generators nearby. You’ll save a ton of resources by not having to run cables and pipes everywhere, or having to build extra buildings because you made poor placement choices early on. Lots of buildings cost metal, and until your colony is up and running, metal will be in short supply. You can never have enough, so try to be as conservative with it as possible. Think two steps ahead. When the game is at normal speed, it’s essentially moving at a crawl. You have plenty of time to think things through, there is no rush.

When you’re storing materials, keep them near buildings that will need those resources. That way your drones aren’t wasting time traveling long distances. Or, worse, you don’t realize for a long period of time that your resources are completely out of the range of the drones that need them. You think you ran out and call in a resupply, but in actuality you hid them from yourself.

If there is nothing particularly interesting near you, use your orbital drones to try and find something that is helpful to give you a boost in the slow early game phase.

Finally, think hard and long about where domes are going to go, because going through the effort of setting up a dome full of costly materials, and human colonists, just to realize later that it’s actually useless, is very frustrating. It’s natural for your first dome to kind of be sloppy because you’re still learning the game, how it works, and just want everyone to not die. But make sure you know what you’re doing the second time around.

Again, it’s all about mapping in your mind, before you build it, what your colony is going to look like.

Take Time to Understand What Resources Are Used For

Don’t just go building things just to build it. Unlike some other strategy games where it’s in your best interest to spend your resources quick, even sub-optimally, in Surviving Mars, you want to be stingy, lest you wait around for resupply rockets. Just as you could imagine what starting a colony in real life would be, you want to be conservative. Build only what you need.

Keep your resources well organized in depots, know how much you have, and know how much every building you makes costs. If you know you’re running low on metal, or something else, get a rocket going ahead of time rather than waiting until you realize you’re running out and you start wasting time, or worse, cause some kind of power/oxygen/water shortage.

Pause the game, dig around the build menu, and familiarize yourself with what everything does, and how much it costs.

While your drones do all the work, your rovers are important too. It is easy when you’re just starting out to forget that they even exist in fact. Unless you tell them to do something, they won’t. They will just sit there, outside of your first rocket forever until you give them some orders.

Use the RC drone commander to pack up drones that aren’t doing anything and move them away from your first rocket and build something a little further away until you can set up something more permanent there. Getting something going is better than having drones sitting around bored.

The transport rover has a ton of space to move resources around and can be programmed to set up a permanent supply route between two distant points. When your colony starts to become really big, this because essential.

Finally, use your analyzing rover to make sure that any anomalies you come across get researched right away. Anomalies could be nothing, but they could also be shortcuts to breakthroughs and other huge advantages.

Have a Plan in Mind for Your Domes

Just like your overall colony, on a more micro level, you need to make sure you’re planning out your individual domes too. Think very hard about where you’re putting them, especially if you’re trying to make it more of a mining dome. But just as important, is making sure that you’re carefully reviewing and bringing up the right people to fill out the vacant work positions. Don’t bring a bunch of botanists if you don’t even have any farms set up. If you have a nearby mining outpost, make sure that you’re recruiting geologists, so that way everyone is working as efficiently as possible.

If you put people in a job they don’t want, they will take a huge hit to their productivity. So, make sure that your dome is set up with buildings before they get there, check what the best colonists to run each building are, and then review and recruit the right people for the job. Know that your first dome is going to be dedicated to producing food and/or will be mining and your next dome is going to be about research, etc, etc. Always be thinking two steps ahead in Surviving Mars.

Grab Breakthroughs ASAP and Time Out Your Research

Part of Surviving Mars is dealing with the randomness of the researchable tech tree. If you’re playing legit, you’re at the whim of what research is initially available to you. If you get handed lemons, make lemonade. Alter your plans based on what research you have available to you. If you see the chance to get a head start on fungi-farm research, consider planning your first dome around that. If you can deep scan quicker than you thought, go ahead and get that, and start looking for secret deposits you can take advantage of quicker.

And finally, if you do get a chance to research a breakthrough, go for it, as they often are (as the name would imply) extremely helpful, and give you an advantage early on. For example, you could set up the Water Reclamation Spire for your first dome, making your life so much easier if your starting area is scarce on water.