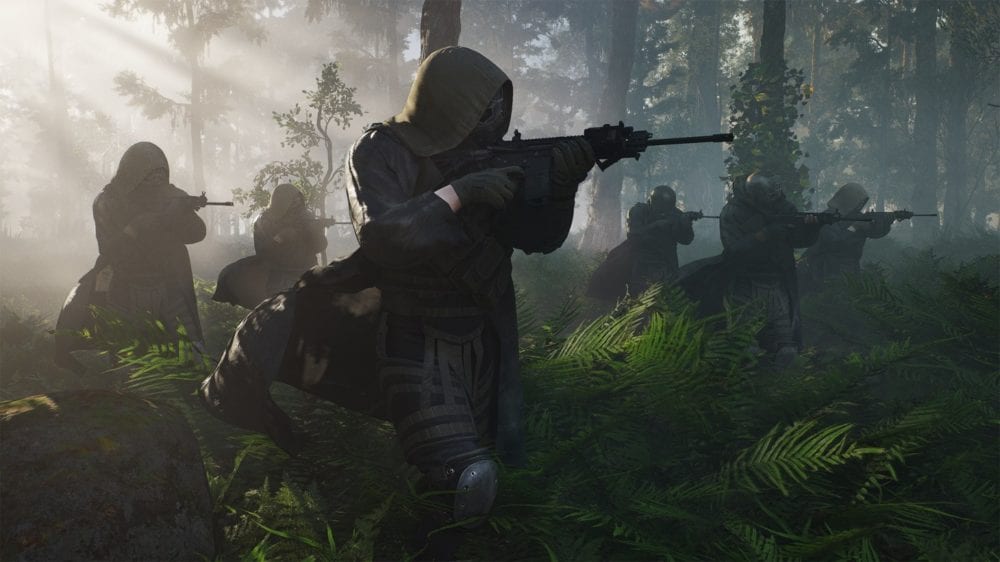 Ghost Recon Breakpoint is the latest entry in the long-running tactical franchise, and it’s doubling down on survival elements as well as freedom of choice.

Breakpoint uses the same systems that were the pillars of Wildlands, but there are some big changes too. The island setting of Auroa takes the franchise to a totally fictional location, instead of an actual geographic one, and the enemies you face down this time are fearsome former Ghost operative called The Wolves.

Twinfinite was able to sit down with the game’s creative director, Eric Couzian, at E3 2019 to learn all about the newest tactical shooter.

Make sure to also check out our own thoughts on Ghost Recon Breakpoint, after an extended hands-on demo of the game.

Hayes: With Breakpoint, do you consider it as more of a continuation of what Wildlands did or kind of more of a new experience, how does the development team view it?

Eric Couzian: Actually is a new experience, for sure, we wanted to bring fresh content in the game. At the same time it is a Ghost Recon game so we have old pillars, regular pillars of Ghost Recon.

Freedom of choice which consists in promoting the fact that as the player you can play however you want, stealthy or go in guns blazing. Freedom of choice in terms of what types of mission I want to take.

At the same time it’s a tactical game, it’s an action game, so we want to improve the feeling of being a spec ops, and being in the shoes in the boots of spec ops.

So that’s the reason we added all these new layers of tactical features, as well as the survival layer, so that it feels authentic.

Hayes: A lot of the messaging so far is that Breakpoint is going to be more of a live service kind of game than Wildlands was, how are you designing it to live long after launch?

Eric Couzian: Actually, Wildlands is already quite a live game, but it was not planned as it’s planned now. For instance, everything here from the start of Breakpoint, we had in mind to make this game live for a long, long time.

For instance even in the story we just show, I don’t want to spoil anything, but the way it was built we just show one part of the story so that after the launch we can develop new stories, but it won’t be improvised, it’s already a thing that we have in our mind as well as all the new features, a new class, that we will bring after launch. All the episodes that are already concept as we speak.

Hayes: In terms of the Ghost Recon series as a whole, where this takes place, is there any chance of seeing items or different situations pop up from other Ghost Recon games?

Eric Couzian: So actually we never define when it happens, it’s nowadays, so there is no connection with the other games. You play as Nomad so it is after Wildlands, and you see what happens with your fellow teammates. Even the relationship you have with Cody Walker, you have this continuation from Wildlands, but no more than this.

Hayes: Starting out was Breakpoint more designed as a cooperative experience apart from a solo experience. There are some players that enjoy soloing it, so how do you tread that line between the two?

Eric Couzian: So it’s a way to design things. You can play solo, you can play co-op, and for us it’s very important that you can switch from solo to co-op without ever wasting one minute.

What I mean is as you keep your progression it allows you to play with your friends whenever you want usually in co-op games, the issue is that as soon as you play and you progress later in the story or in the missions it’s harder to connect with your friends if they don’t play for a few days.

So our philosophy is that you can always play with your friends, even if you have different levels of progression.

So it’s true that it changes the way you design the solo experience because of these constraints, but we have story, we have many storylines. They are numerous so that it allows players in co-op to play even if you have completed several missions.

But we have all the features of a solo game at the same time, you have the drones if you don’t have teammates, we will bring back the AI teammates after launch. So actually if you are a solo player you will have the right experience that fits the expectation of a solo experience.

Hayes: How much variation can we expect between missions? How are you trying to differentiate them?

Eric Couzian: The first thing is that nothing is scripted. Usually what I say is that a camp or a situation is a problem that players have to solve, but we don’t know how they will do it. So it brings a lot of variety which also depends on your personal playstyle.

At the same time you’ll have different tracks or storylines which brings a lot of variety in the types of missions you can make, and a lot of mysteries in terms of narrative which you will find out.

In terms of gameplay, depending on your tastes you can play this storyline or these types of missions or the others, which will be very different.

Hayes: It seems like with Breakpoint, more than ever, fan feedback is really important to you. In the time since you’ve announced Breakpoint to now, how has fan feedback changed anything?

Eric Couzian: Actually we are listening to everyone, but we want to keep the creative vision of the game. We know that we are an action game, a tactical game, all of this is the pillars of the game.

We are listening, but we are keeping the direction we have for the game. It’s very good, we meet fans very often, we know from a long long time, and Ubisoft also has great ears to listen to what the fans say.

Hayes: It looks like there are more stealth options in Breakpoint. Are you trying to give players more options in terms of how they approach things than in Wildlands?

Eric Couzian: Actually we have added new features to help reconing, because information is key in the Ghost Recon loop. Having information on where enemies are located can make the difference.

You can cover yourself in mud or in snow and if you stay still the enemy won’t notice you. It’s a big game changer because it really helps and promotes the player’s want to play stealth and super tactical.

Hayes: Something that a lot of players seem to want, are they going to be able to customize the HUD and kind of fine-tune things the way they want it?

Eric Couzian: Actually it’s already something we did in Wildlands and it’s something we want to keep and push further. It’s always the same thing, we say we want to promote freedom of choice. So if they want to customize the HUD, they will be able to do it. For us it’s very important that if you want to remove all the UI and play, yes you can do it.

Hayes: Is there a specific reason that you choose to set a Breakpoint in a fictional location, rather than somewhere that is actually real?

Eric Couzian: Actually the main reason is that we wanted to have more freedom in terms of creativity, especially since the terrain now has a big impact on your tactical decisions. The fictional place allows us to balance the game so that the terrain doesn’t become, not a problem, but we want the experience to remain very accessible to everyone.

Hayes: How are you approaching different weapons? When people get a weapon that they like how are they going to be able to keep that weapon with them?

Eric Couzian: For us, yes, we know that if you’re a fan of this weapon or this one, we want them to first know where the weapon is located. It’s not an official mission, but it’s where you as a player will set your own objective. OK this weapon is there hidden or kept in the armory of this camp, so it’s up to you if you will attack this camp to steal this weapon.

Then you can keep the weapon as long as you want, have different kind of attachments, improve the weapon, change this attachment to have less recoil or anything. So yeah you’ll be able to keep the ones you want and customize the weapons on how you like to play.

Hayes: How are you making the Wolves different from all the other enemies of this game? How does their AI work differently to make them feel like a unique challenge?

Eri Couzian: For us it was very interesting to design the AI of the Wolves, because here they are able to hunt you, something that is quite original is to have enemies that when they detect you, they can hunt you down everywhere in the world.

So they are able to send drones as well as helicopters, and they can follow you far, so even if you were to run away from them you will have to be smart and hide to get rid of them.

At the same time, if you feel that you have the guts for it, you are skilled enough, you can face them and try to win. It’s how you like to play, are you good enough for it.

Hayes: With such a long plan for Breakpoint, are you looking at next-gen consoles?

Eric Couzian: For the moment what we plan is to ship this game on the 4th of October on PS4, Xbox, and PC, and we are looking for the future and we will tell you more after.