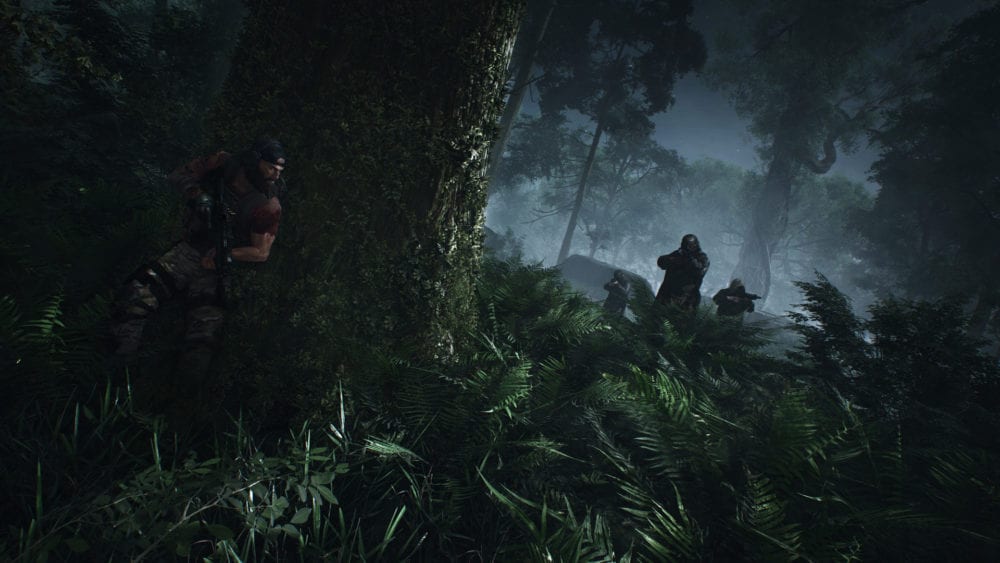 You never quite know what to expect when playing a demo with random people you’ve never met, but an hour of pure adrenaline-fueled chaos was not really what I was expecting for Ghost Recon Breakpoint. Myself, two other players, and a dev all took up different squad members for our demo of Ghost Recon Breakpoint, and a few minutes of stealth quickly devolved into nearly an hour of chaos, blissful chaos.

The mission: to infiltrate an enemy compound and extract an important VIP. For this demo, I played a Sharpshooter character, a sniper primarily focused on long-range damage, but with a host of close-range options as well. Before heading out I was able to take a look at some preparation screens at the bivouac, a kind of mobile command center you can place down anywhere in the world.

Interestingly, there’s a preparation option that lets you choose one of a variety of bonuses, like bumping up your stamina.

With the dev leading us we headed down a hill toward the compound, and decided to ambush a small convoy along the way.

We dealt with this group without much trouble, then made our way to the fence of the compound. Here we saw a couple of the new features for Breakpoint. All four of us popped out a drone by pressing up on the d-pad, gaining direct control of it.

As all four players can control a drone separately it makes for some quick recon as each of us spotted enemies, drones, heavies, and more. Even better was that each of us could mark points of interest, thereby pointing out where enemy heavies or hulking robots were.

After finding and marking every enemy we possibly could, we used another new tool, the torch, to cut through the wire fences surrounding the compound. The stealthy approach was going just peachy… until a random soldier came out of a door and spotted us, siccing the entire base upon us in the process.

From there things only seemed to get worse, which is where even more new elements came into play. Although it’s plenty easy to stay alive by running and taking cover, any bullets or explosives can give your character injuries.

Getting an injury can severely affect your mobility, causing your character to limp or practically crawl if they have a really bad injury. Each injury takes off one of your health bars, preventing you from recovering it with a stimpack. The only way to recover these injuries is by using bandages, which unfortunately put your character in a lengthy animation.

None of this is bad, however, as it racks the tension up to 11, making you really have to choose where to use your bandages, and hope that your team is able to cover you.

Things were really tense for a while, as the whole team was pinned down against the fence of the compound, peppered by machine gun fire as a soldier continuously launched mortars. You’d kill one enemy, only to get blown to bits by a mortar.

Luckily, Breakpoint makes it easy to get back into the action. If an ally can’t revive you in time you can simply respawn on any ally’s location, as long as they’re alive. Of course, if everyone is down that’s it, game over.

After scraping through waves of enemies and one particularly fearsome giant robot, we finally made it to the VIP. Things were rough, but the fight we had ended up paying off. Our next objective was to set bombs around the base, which was a simple matter, since we’d already cleared out all the enemies.

If we’d taken the totally stealthy option we’d, no doubt, have had to contend with multiple other enemies. Just this one small mission had a ton of different approaches to it, and even though we screwed up our approach we were still able to make it through.

After one failed attempt at extracting the VIP, we finally managed to get her out, pilfering a helicopter in the process.

After getting away we landed in an absolutely gorgeous field of red flowers, a location that really showed off the graphical improvements and variation that Breakpoint has over its predecessor, Wildlands. The island setting is so much more visually diverse than the arid deserts of Wildlands.

Our second mission was to eliminate an enemy captain inside another base, and once again we tried to infiltrate only for things to go horribly wrong; clearly none of us were being very careful.

Minutes crawled by as we kept getting downed and reviving each other as enemies swarmed behind fences. Then at one point, I got up after being revived, aimed my scope and sniped an enemy up on a ledge that kept peppering us with fire. One second after I got blown to hell by a mortar, perfect timing.

Turns out he was the captain, our objective, and after that we were able to just pull out and run away. Dumb luck, sure, but it worked.

After gearing back up at the bivouac we had one more surprise in store, taking on a giant four-legged robot known as the Behemoth. This hulking beast soaked up fire, shot out rockets and mortars, and required you to stay on the move constantly. This enemy provided a completely different challenge from the others, as it really required coordination and flanking in order to take down.

Right down to the very last second our demo time ran out, only for someone on our team to launch one final rocket and destroy the Behemoth. I was finally able to unclench my controller.

As someone who only dabbled in Ghost Recon Wildlands, I didn’t have huge expectations for Breakpoint, but the sheer madness of our gameplay demo was a ton of fun.

Precise coordination could have gone a long way to making our mission a silent and deadly one, but shooting everything that moves was just as valid of an option. It was great to see so many different options on how to approach something, and the survival mechanics constantly made things even more nail-biting.

I only had an hour with Ghost Recon Breakpoint, but it was enough to get me interested in where the game goes from here. It’s clear from the get-go that you’re going to be severely outgunned at almost every opportunity, and that’s a large part of what makes things feel so chaotic. These overwhelming odds play into the general idea of the game, with you alone and isolated on the island of Auroa.

Ubisoft seems to be very receptive to fan feedback, and that, coupled with strong core gameplay, could just make this a special Ghost Recon.