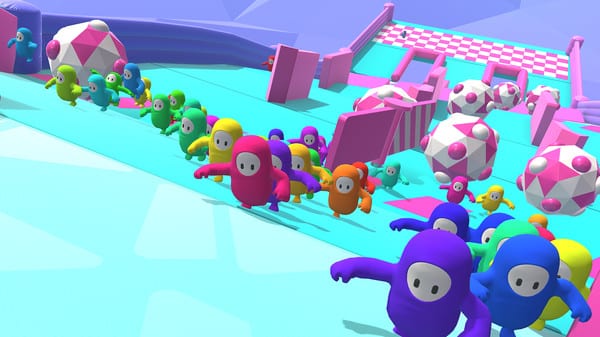 The highlight of my E3 2019 experience was going across the street from the convention center and taking a visit to Devolver Digital’s ridiculous set-up in a parking lot full with RV’s and campers that were host to several of Devolvers’ indie games, and the one I played was called Fall Guys.

Medatonic’s Fall Guys: Ultimate Knockout is a competitive battle royale-esque multiplayer game that throws the player into a series of wacky challenges where you control a blob-like creature that you can customize.

Essentially, think about those hilarious reality television shows like Wipeout or Takeshi’s Castle, where people have to make a mad dash for the win and then move on to the next round.

I sat down and played a couple of matches in which one, I was the sole victor. There were only three types of minigames shown off during the demo, but they were all different from one another and the developers plan on adding more into the mix once the game launches in 2020.

So you start off with about 100 characters at the starting line and for the purposes of the demo, the majority of the Fall Guys were controlled by the AI with two of them being controlled by other players in the same room as me. The first challenge had us running straight towards a goal but there were a number of doors in our way that may or may not be able to be opened.

As you can see in the image down below, an X will appear above the doors that don’t work and it’s all just about guessing which one will open and which ones stay shut.

This leads to madness as people are diving and jumping over one another to get to the correct doors first. Do you stay back and watch as the others bang into the wrong doors or do you try your luck and attempt to figure out your own path?

There are also some pretty hilarious physics so I spent a good chunk of the demo laughing alongside the developers whenever my character would randomly launch themselves into the air or dive into the air only to completely miss the objective.

The second minigame was basically a game of tag, but with a twist. You and some of the other blobs (I really don’t know what to call them), all start with tails attached to your backside and the goal is to have your tail still attached until the time runs out.

Other players can sneak behind you and take your tail but you can steal it right back, or just take a tail from another player. In this one, there were moving objects all around like a swinging pendulum and balls that can whack you if you’re not paying attention.

And the last one was a massive race up a hill that had objects falling down towards you that you have to avoid and then eventually get to the crown by grabbing it to finish the competition.

After each minigame, a big percentage of the players get cut off (battle royale style) and you’re left with only a couple of challengers at the final game. Once I got to the last challenge, the stakes were really high and I could see this being very exciting, hilarious, and really entertaining if you’re playing with friends –especially if alcohol is involved.

Fall Guys is shaping up to be one of those odd multiplayer experiences that will have you and your friends cracking up all night long. If the developers keep their promise of adding content and new challenges to the game, then this smells like another hit from the popular publisher.

Unfortunately, Fall Guys isn’t coming to Switch anytime soon, since the game is slated for release only on PS4 and PC, but Devolver and Mediatonic hope to get it on the platform eventually.

For more hands-on E3 coverage, make sure to search for Twinfinite. We have previews for some of the biggest games at E3 like Watch Dogs: Legion, Pokemon Sword and Shield, Final Fantasy VII Remake, and much more.