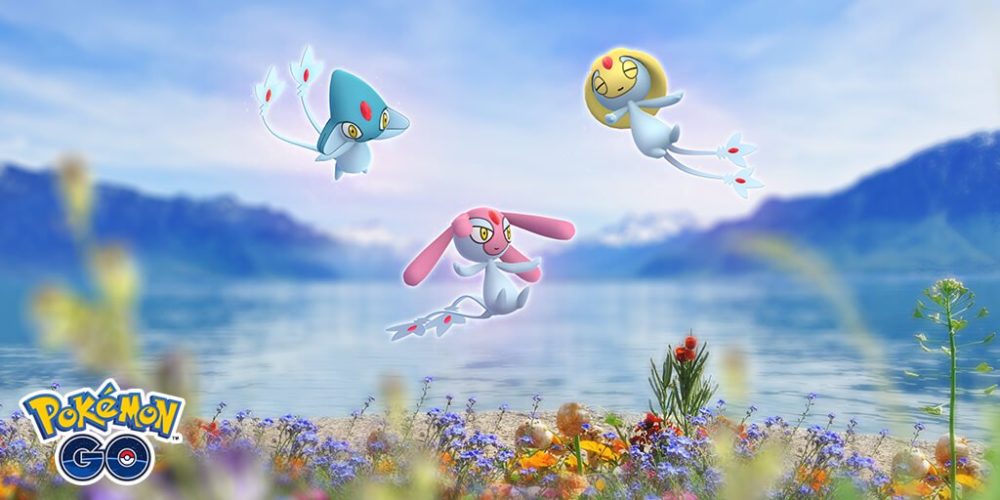 Well, that came out of nowhere. One day there are reports of Azelf, Uxie, and Mesprit appearing in the wild. Next, they’re popping up in legendary raids around the world. Oh, Pokemon Go, you still find ways to surprise us all!

It’s tough to complain though. This will be a nice change of pace after the five Dragon-Type raids we’ve had since the introduction of gen 4 Pokemon. This Lake Guardian trio’s pure Psychic-typing will make it easy to build a competent raid team.

How to Get Azelf, Uxie, and Mesprit

Each one of these Pokemon is currently available in legendary raids. The only catch is that each one is tied to a specific region. Azelf is the one we get in North and South America. Mesprit raids can be found in Europe, Africa, the Middle East, and India. Uxie rounds out the bunch and is only available in Asia-Pacific countries. 4 trainers per raid group with strong counters should be enough to just squeak out a victory against any one of these Pokemon.

All three Pokemon will also be available in the wild with no region restrictions following the raids. This will be the first time that legendary Pokemon can be encountered in the wild.

Since the Lake Guardians are all Psychic-types, this makes figuring out strong counters quite simple. Just stack up your Tyranitars and any other beefy Dark-types you have.

The only thing that mixes it up a bit are the different moves that Azelf, Uxie, and Mesprit utilize. The only foreseeable issues are Weavile vs Azelf’s Fire Blast, Sharpeedo vs Uxie’s Thunder, or Honchkrow vs Mesprit’s Blizzard.

Here are the Pokemon that will make this an easy raid:

Each Lake Guardian excels in different aspects of the game. Azelf is a bit of a glass cannon as one of the top Psychic attackers in Pokemon Go. Uxie has one of the best defense stats in the game. Mesprit has good stats across the board but doesn’t excel in any category.

Azelf will probably be the most useful of the bunch. Pokemon Go already has a better, more easily obtainable Psychic attacker in Alakazam. However, Azelf will be easier to get than the other attackers above Alakazam (Mewtwo, Attack Form Deoxys).

Uxie has an excellent defense stat, but most trainers already have tons of Tyranitars for bullying Psychic-types defending gyms. Also, this guardian’s lackluster HP may hurt its viability as a gym defender.

Mesprit is just kind of there. It doesn’t have great HP, defense, or health. Even though it’s a much better attacker than Uxie, it’s not strong enough to matter. Mesprit is the only Lake Guardian likely to be nothing more than Pokedex filler.

Azelf, Uxie, and Mesprit all share the same fast attacks. Both moves they can learn are solid fast psychic moves. There’s nothing to complain about here. These are their fast moves:

The charge attacks differ slightly. There are two charge moves that are constant between the group, but then each one gets their own third attack. Swift isn’t even worth thinking about. We suggest ignoring those other moves. A double Psychic-type moveset is the way to go with all three. Here are the charge moves that they all learn:

Azelf is the strongest of this bunch. If you don’t have a Mewtwo, pick up one of these little guys. They’re not anywhere close in terms of strength, but Azelf is a solid Psychic attacker. Here’s how it stacks up:

Uxie will last a little longer in gyms than some of your other Pokemon. The prevalence of strong and easily obtainable Dark-types, however, might hurt the longevity of Uxie.

Mesprit is just a plain old disappointment. It’s fine for low-tier raids and poorly set up gyms with too many fighting Pokemon. In the end, Mesprit will probably just sit unused in your box if it never receives a buff.

That’s all there is to know about the legendary Lake Guardians (Azelf, Uxie, Mesprit) Raid Guide, Stats, and Movesets. Now get out there and catch these tiny creatures before they leave raids (May 27 at 4 Eastern) and become extremely rare wild Pokemon.