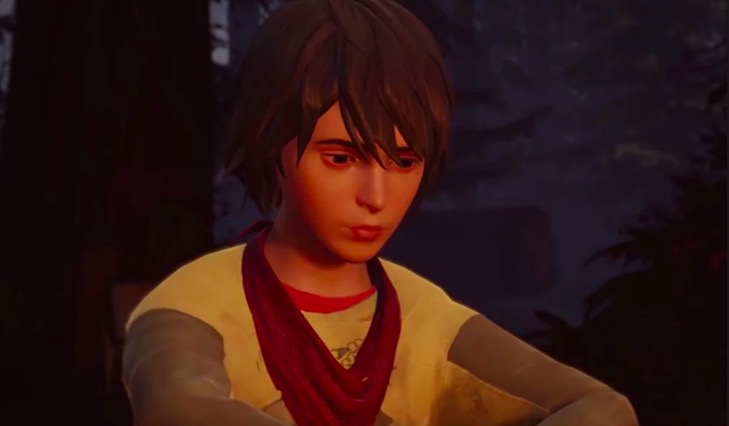 No matter what I say or do, and no matter which decisions I choose to make in front of Daniel, Sean’s younger brother in Life Is Strange 2, it’s as if Dontnod is forcing me to become a bad influence on him.

As someone who has a little brother that happens to be the same age as Daniel, I felt frustrated that there was one thing in this “choose-your-own-adventure” game that I couldn’t control, and that one thing is the terrible events that are happening and will continue to happen to the Diaz brothers, whether I want them to or not.

The third episode of Life is Strange 2 brings us to a pot farm, where Sean and Daniel have been working at for several weeks now, sleeping in a tent amongst a group of young adults who are just trying to get some cash. They all seem to have troubled pasts and have lost their way in the world, but waking up every morning to go to work is the only thing keeping them sane.

Luckily, Daniel even manages to snag up a job as well, but due to his younger age, Sean has to kind of pick up the slack for his little brother. This isn’t the best decision that Sean could’ve made for Daniel, but if the two of them still plan on making it down to Mexico eventually, they’re going to need some cash, even if it means that Daniel has to be around illegal substances day in and day out.

This was not a choice that was offered to the players, as these plot points took place after the event of episode 2 and before episode 3, and I’m upset that this was done this way.

You see, I play Life is Strange as if it were real life, and for every single decision that has to do with Daniel’s safety and well-being, I first tend to think “would I do this to my own brother?” –for the most part.

These are the big decisions that should’ve been a player choice, but in order for the plot to move forward, I totally understand why this was chosen by the developers and not the player.

Nevertheless, some of the choices in this episode were the hardest I’ve had to make and even picking the “right” one often still felt as if Sean was being a bad brother to Daniel.

He didn’t need to be in these situations, but no decision I made seemed to matter or made him like Sean more, and that truly stung.

For example, in one long but pivotal campfire scene, the group of Sean and Daniel’s friends/co-workers sit around to expel their deepest and darkest secrets. Well, not secrets per se, but the saddest things that have occurred in their lives.

Pretty much everyone, besides Daniel, is smoking and/or drinking booze. They’re all in their feelings and have a good ‘ol time listening to each spout some of the most depressing subjects out there.

Daniel’s turn is next, and of course, he tells the group about his deceased father. Daniel misses him, and there comes a moment where Finn, one of the members of the crew offers Sean a hit of the pot; choose to smoke and Daniel will ask why he can’t partake in the activity as well.

If you refuse, you’ll seem like a good role model for your bro, but he’s still surrounded by pot and booze on a daily basis. It doesn’t change anything.

Daniel also becomes buddy-buddy with Finn, choosing to hang out with him instead of getting yelled at by Sean. Daniel even removes his watch from his arm that was given by Sean and replaces it with a wristband from Finn instead –that hurts.

Playing as Sean, I even took Daniel out to practice his powers, but he still ends up hating me because I want him to lay low and learn how to control his powerful newfound gifts. Daniel seems to never understand why we want to keep this power of his a secret, and he continues to disobey my rules.

Thinking about it from Sean’s perspective, it now it feels like whatever I try and do to make my brother love me, he keeps acting like a rebellious little jerk. And being around all of these people isn’t diffusing the situation at all.

A child doesn’t need to be working on a pot farm with a ton of strange people that don’t know what we’ve been through. Sure, they care about our well-being, but Daniel is never going to listen to me, and as he grows into a teenager, I’ve come to terms with the fact that the brothers’ situations aren’t going to get better.

I think Dontnod is trying to make that apparent, especially with this specific episode. You can try to be a good role model for Daniel, but their world is a dangerous place and it doesn’t follow a natural day to day life that siblings usually go through.

They’re not having breakfast with their dad every morning; Daniel isn’t getting help from his brother to complete his homework, and Sean and Daniel do not have a place to call home.

Life is Strange 2 continues to push Daniel away from Sean, and it’s really hard to see as the two of them get closer and closer to their goal. I really hope that Daniel and Sean can reunite and come together again as two loving brothers, but with the challenges that the two of them continue to come across, it doesn’t look like that’s gonna happen anytime soon.