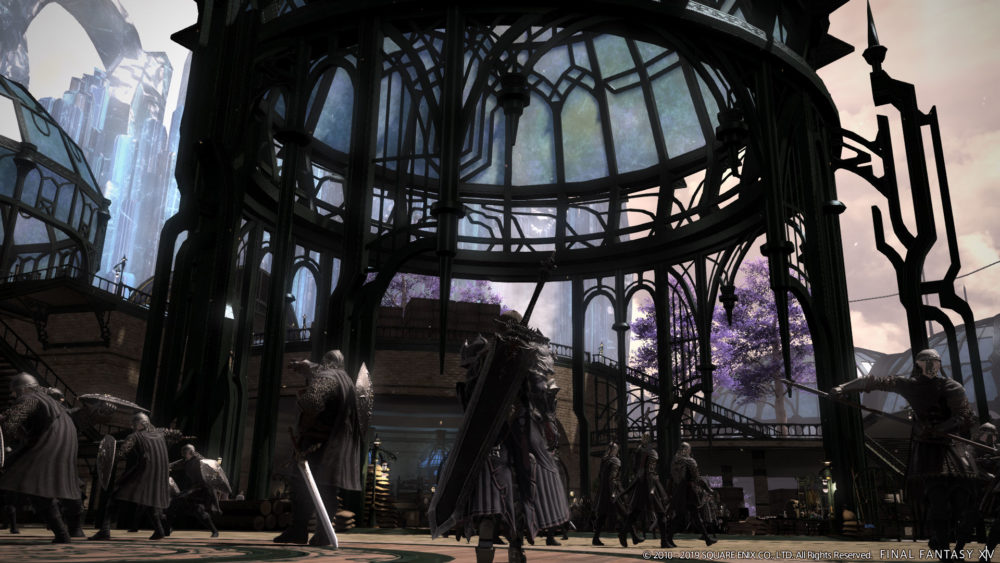 Last week I traveled to San Francisco to get some some hands-on time with the unreleased upcoming Final Fantasy XIV expansion, Shadowbringers. Although it was a whopping nine hour day, I didn’t learn much about the game’s story, new areas, dungeons, activities or anything like that.

Instead, the large bulk of the time was spent learning about, and test driving the new job adjustments and balance changes coming to all existing jobs and roles, in addition to the new jobs coming along too, Dancer and Gunbreaker.

If I had to boil my experience at this event down to one key takeaway it’s that director and producer Naoki Yoshida and the development team are going for total job parity and balance in a way that I haven’t seen before.

The blueprint for this appears to be this: Any specialization within roles that has existed in Final Fantasy XIV is designed to be dismantled in Shadowbringers.

This means no more tanks that are better as main or off-tanks. All four tank jobs are going to be retooled to work well in either spot.

The team are going after healers too and eliminating the more subtle, but still incredibly important differences between them.

White Mage is getting better mobility and instant cast spells to help with its overall DPS, Scholar is getting more ways to innately heal HP, and the RNG/strategy (however you want to look at it) behind Astrologian cards is getting heavily neutered in favor of a simplified system all about increasing damage and only damage. You don’t have to fish for Balance if everything is Balance after all.

The DPS jobs, which offer arguably the most distinct experiences within them are also having a lot of their identity shaven down to make them easier to balance for the dev team.

The biggest change is by far the removal of synergistic job actions like Dragoon’s Impulse Drive combo paired with Battle Litany to benefit Bards for huge DPS spikes.

Strategies like these, that offer a clear advantage over other strategies involving other jobs that don’t pair as neatly, spread throughout the community like wildfire.

Even though in reality, Final Fantasy XIV is already very well-balanced and any content can already be cleared with any combination of jobs, the development team are clearly aware of the very real attitude among the community that certain jobs are preferred and they want to do everything they can to eliminate that.

I’ve seen the writing on the wall for this move going back to pre-Stormblood. The game has been shifting towards cutting the fat and simplifying gameplay going back to Heavensward.

Whether it’s removing cross-class abilities, situational actions, and now as of Shadowbringers, attributing melding and manual selection of role actions; with every expansion, the development team has gnawed their way through what they feel is excess and towards the real meat of the game.

The simplification of Final Fantasy XIV is something that I’ve been concerned about for years, and I’ve asked Yoshida-san about it pretty much every time I’ve interviewed him in one way or another.

The obvious question that comes to mind is if every job can do everything just as well as other jobs in its role, what is the point of having different jobs? What sets them apart?

The answer that Shadowbringers is hoping to supply is this: the development team is going to lean very heavily into the fantasy of each job and give you access to flashy actions that make you really feel like you’re stepping into the shoes of the online version of your favorite classic job.

A Dragoon might not do anything that’s substantially different than a Monk in the grand scheme of things, but you’ll get to the same point in a way that feels different at least.

Honestly, I am buying it… at least for the jobs that I play, but your experience may vary. I’ve played Summoner and for years I’ve lamented that the job is too heavily centered around damage-over-time spells and spamming a single spell (Ruin) over and over again, and less about… you know… summoning things.

Shadowbringers will overhaul the pet system as a whole and Summoner will benefit the most from it.

Not only are Summoners getting another new pet, Phoenix (working very similarly to Bahamut), but the three core summons Titan, Ifrit, and Garuda are being completely reworked to make them a meaningful part of your rotation rather than just siccing them onto an enemy and forgetting they exist.

I experienced other really neat actions as well. Dark Knights will be able to summon a shadow clone of themselves, Bards will get a new Soul Voice gauge, Dragoons will get more attacks that see them flying high into the air and ripping back down to earth with the force of a dragon.

There’s going to be some “sameyness” between the jobs though, and players are definitely going to notice it. The hope that I think the dev team has is that the fun of playing with these new reworked rotations and the comfort knowing you’re not going to be a job that’s unfairly left out of high-end activities will be worth the sacrifice of identity. How the community will react when they too can go hands-on with Shadowbringers remains to be seen.

That’s not all we saw, though. We did get to explore a few of the game’s new areas and one new dungeon: The Crystarium, II Mheg, Lakeland. and the Dohn Mheg dungeon.

While the general structure of dungeons are the same, Dohn Mheg gave us a taste of some of the unique ideas that are hopefully in store for players leveling up. There’s a platforming section in the middle of a boss fight which should lead to panic and hilarity when played with pick up groups.

What is not surprising about those areas is that they are gorgeous. Unlike the dusty field areas of Ala Mihgo, The First is brimming with bright colors and beautiful fields of purple flowers. All the areas pop and if you’re sick of brown, you should be very happy exploring the new Shadowbringers areas. The music, as usual, was also on point.

There’s been a constant criticism that so much time is spent creating these beautiful new areas and after the main story is complete, they quickly become just stops along the way rather than places people spend meaningful time with.

As lots of players already know, FATEs are going to be adjusted to provide more than just experience points. Hopefully this is one step of more to come to make all of Final Fantasy XIV’s areas, not just the instanced content and towns, a place where people want to go to hang out.

Overall I walked away very impressed with what I had seen of Shadowbringers. While the move to simplify everything continues to be a bit unnerving, at least I’m able to wrap my head around the plan to offset it.

As long the gameplay is eventually coupled with new gameplay experiences like what we saw with the Eureka experiment in Stormblood, I’ll be very content with the direction Final Fantasy XIV is heading in for its third expansion. If it’s just more of the same, it will be problematic.

For more preview content about Final Fantasy XIV: Shadowbringers be sure to check out full interview with Naoki Yoshida, and our impressions of Dancer and Gunbreaker.