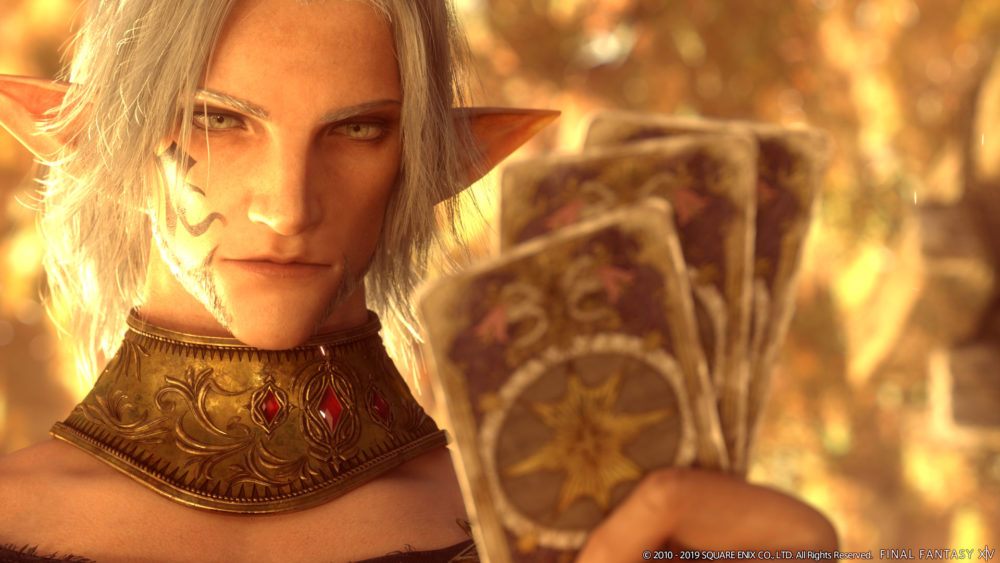 One of the most anticipated -and important-  aspects of any Final Fantasy XIV expansion are the addition of new jobs, actions, and the balance adjustments that come with all those things. Sure, they aren’t as sexy as a new story, characters, and areas to explore, but when the dust settles it’s the stuff that will have more impact throughout the lifetime of Shadowbringers.

Recently, Twinfinite had an opportunity to interview Final Fantasy XIV producer and director, Naoki Yoshida, and talk to him about the new jobs Dancer and Gunbreaker and to get his thoughts on some of the more notable decisions that were made for Shadowbringers.

Throughout the time we spent in San Francisco last week, job adjustments across the board was the major talking point for Yoshida-san. It took up the majority of the roughly hour long presentation that kicked off our day, and since we didn’t get to see any story content, our play time mostly centered around playing with the jobs old and new in a few of the early areas of The First.

Arguably the most controversial was the call to not add a new healer. At the time, the explanation was that more time was needed to be spent on balancing the current healing jobs.

Now that everyone knows exactly what the balance changes are, I asked Yoshida-san to elaborate further on how the adjustments that were made addressed the issues that the dev team had with healer balance over the last few years.

Editor’s Note #2: Yoshida-san’s answers we’re delivered to us by an interpreter and his responses have been slightly edited for increased clarity.

According to Yoshida-san, raids had a big impact on healer balance for Shadowbringers. He recognized that what players prioritize in raids is different. While all the healers can heal just fine, there were big disparities in DPS capabilities.

He explained that Healer DPS is impacted by a lot of factors such as mobility and healing potency, with both of those things impacting the amount of “wiggle room” you have to DPS.

This flexibility is key, and rather than have certain healers specialize in one aspect or another, they decided to even the toolset across the board for all the healers.

The healer that struggled the most in the Stormblood era was White Mage. It appeared to be designed to be the “ultimate” potency healer. For some raid groups, this niche might have been helpful for clearing and progression.

However, most groups favored Scholar and Astrologian, both of which had far better mobility, quicker casts, and DPS potential. When you have a group that knows what they are doing, having that little bit extra healing juice isn’t as useful as being able to get the kill as quickly as possible before other players can make a mistake and cause a wipe. The faster the better.

Additionally, Yoshida-san described a scenario where White Mage and Scholar are paired up to heal. Scholar is primarily a barrier healer and lacks the ability to cure to the extent that a White Mage can. As a result, the White Mage is stuck doing most of the heals while the Scholar can DPS away.

“We went into reviewing all of the actions of these three healer jobs, which are all kind of convoluted and kind of tangled into each other, and sort of made sure that we were addressing the different stress points.” said Yoshida

Specifically, you’ll see changes such as a simplified card system for Astrologian in addition to abilities like Celestial Intersection that allows them to dip into the power of both sects for a short time, White Mage’s Afflatus Rapture which is a powerful instant cast AoE cure, and a whole host of direct healing actions for Scholar.

Yoshida-san wants any healer to contribute equally to DPS/Healing or specialize in one of the other with little issue. This standardization across the healers is also reflected in the changes made to tanks.

With the removal of hate combos and DPS stances, every tank is better suited to focus on maximizing their DPS and whoever is the main tank at the time can just flip on their tank stance to hold the enemies’ attention.

It feels a bit like they are surrendering a bit of job identity and specialization with these changes in Shadowbringers, but the goal is a noble one: total job balance across the board and 100% viability no matter how difficult the content is.

Final Fantasy XIV’s older sibling Final Fantasy XI had job identity out the wazoo, but the game is 17 years old and there are still jobs that never climbed out of the cellar of futility.

Another dramatic move that could be seen as a direct attack on flawed job balance was the removal of synergy between select jobs.

Over the years, certain jobs’ actions would feed into another job’s DPS. The prime example of this in Stormblood was Dragoon and Bard which fit together so well.

Both jobs specialize in piercing damage. The Dragoon could raise the critical hit rate and piercing damage of the party which suited the strengths of the Bard perfectly, allowing both jobs to benefit from sky-high DPS.

Actions, such as the Impulse Drive combination for Dragoon, that reduce an enemy’s resistance to a certain weapon type though are being removed in Shadowbringers.

Having jobs work together like this is (or soon to be ‘was’) a neat concept but apparently it was too difficult to balance. I asked Yoshida-san if thought that the synergy attacks were the main problem behind achieving total parity.

For Yoshida-san, it’s more about correcting player mentality that trickles down from the elite raiding community down. The goal for him is for any job combination to clear any content in Final Fantasy XIV. Even in Stormblood, while balance wasn’t perfect, this was already achievable.

The problem stems from average players trying to replicate what groups that are good enough to go for world firsts are doing. The debuffs are so useful for when you’re trying to overcome Item Level disadvantages and that was intentional according to Yoshida-san.

However, the unintended consequence is that these tactics kind of became a “golden rule” or a default strategy for many teams.

“Players are taking that functionality, applying it, and making it sort of like the ‘golden rule.’ Once we’re out of the period of racing for the world first, [players still] have that sort of fixated notion of: oh we need this in order to get through certain content.” said Yoshida

Although some may miss this synergy, it also falls in line with what appears to be a general plan of sacrificing a bit of identity and player ingenuity for the sake of having a game that is as inclusive as possible to all jobs and player preferences.

New Shadowbringers Jobs: Dancer, Gunbreaker & What Could Have Been

Our conversation wasn’t all just about the current jobs though. I did want to learn more about what he thought of the two new jobs, Dancer and Gunbreaker.

Although they are advanced jobs, there are roles and jobs that seem to be designed for beginner and expert players. Red Mage, for example, is arguably the easiest job in the game to play and master. Was there any similar thought behind Dancer and Gunbreaker for Shadowbringers, I wondered?

“I think Dancer will definitely be closer to what you have imagined with the Red Mage,” Yoshida-san said. While the Dancer is going to feel foreign at first because of its unique gameplay of dancing and buffing others, he believes that once players get the hang of it, it will feel very intuitive and there shouldn’t be a huge disparity between the player’s skill levels.

On the other hand is Gunbreaker which will be the reverse of this. Yoshida-san feels that at a glance Gunbreaker will feel very simple to handle. I can attest to this from my hands-on time with Gunbreaker (and Dancer).

There are different combos that stem from the bullets-based actions that Gunbreakers will be able to use in battle, making for some interesting choices for experienced players that want to make the most of them.

“For those more experienced players we would want to recommend trying out the Gunbreaker.” Yoshida said

Finally, I did want to try and see if I could suss out some information about any scrapped jobs or concepts that didn’t make the cut for Shadowbringers.

Before Stormblood, Yoshida-san was willing to spill the beans on an idea he had for a job that was ultimately scrapped. So I thought I’d try my hand again.

This time, though, he was tight lipped. While he admitted that were other ideas that he had, this time around he didn’t want to share them.

The reason for this is that he doesn’t want to disrespect the players by getting their hopes up on anything, or disrespect the development team. The interpreter broke down his thoughts on the matter:

“Saying [the idea] is very easy. Hypothetically speaking, Yoshida-san is saying ‘He wants this job.’ It will affect the development team and he would feel really bad because some people interpret him specifying a job as hyping that anticipation of ‘oh the next job might be such and such’ and the development team might take it upon themselves and think ‘oh Yoshida-san said this, I have to come up with a way to make that happen!’ It’s tough…”

Fair enough. Funny enough though, he turned the question around on me., asking me what ideas I had. It was a lot of pressure, because anyone reading this has their own preferences and who knows, maybe I would have an impact on Yoshida-san. Probably not, but still.

I suggested Chemist as the next healer. Something different from all the spell-based healers we have in the game already, and could combine actions for healing effects and use their gun as a DPS tool. He looked up in thought and said “interesting” and smiled.

I’ve been predicting (or after so many failures wishing) that Chemist would be the next healer in every expansion so far. Hopefully I helped my own case for the next time.

For more Shadowbringers preview content, be sure to check out our impressions of Dancer and Gunbreaker and which jobs are getting the brunt of the major changes.