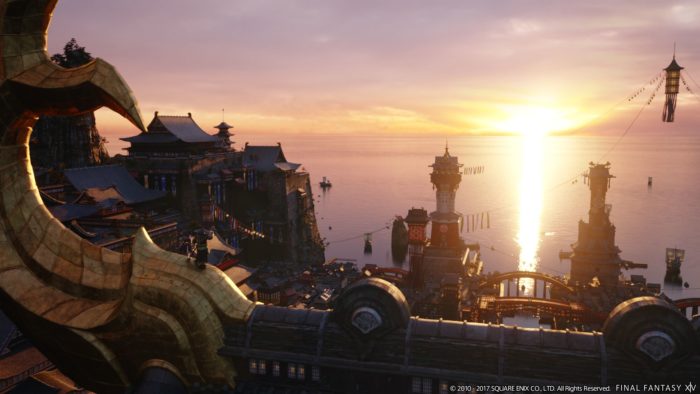 I might be one of the few reviewers on the planet that felt that FFXIV: Stormblood had a lot to prove. After a decade plus of Final Fantasy XI, riding out the original Final Fantasy XIV launch for a bit, and returning for good once A Realm Reborn hit, I’ve become a bit of a FF MMO snoot. The era of me being wide-eyed impressed with some flashy boss battles and new areas is long over. I want meaty content that’s going to improve my quality of life while playing.

When Heavensward released a couple of years ago, I was one of the few that was overall critical of it. Salvaged partially by its story and beautiful zones, I couldn’t help but feeling it was a reskinned version of A Realm Reborn filled with lots of fetch quests, a repetitive end game, and new jobs that were uninspired and dull (particularly Astrologian and Dark Knight). If you stuck with it, you might have came to the same realization that we did early on, that Heavensward was a lot of the same.

FFXIV: Stormblood wastes no time instantly eclipsing its predecessor in terms of shaking up the gameplay. Naoki Yoshida and his team examined each job and in some cases made dramatic changes to make each one more streamlined and fun to play, as well as giving it a more defined role in line with classic interpretations of the job. I’ll speak to my own main job Summoner for example. There’s less of an emphasis on damage-over-time spells or generic ruin spells, and instead it’s more about dropping massive Ahk Morn bombs from a new Demi-Bahamut summon, firing off enkindles more often with the other three summons and using these Egis to create better party synergy with the reworked Ifrit and Garuda buffs. It’s not just Summoner of course. Go down the line and you’ll see exciting changes for every job that gives them a unique niche and makes them feel less like copy pastes of one other. 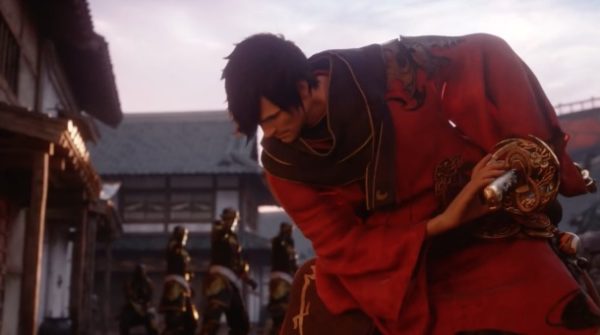 Red Mage and Samurai enter the game in way better shape than any of the three jobs released in Heavensward. I was initially disappointed that there wouldn’t be new Tank and Healer jobs in FFXIV: Stormblood, especially since I’m of the mind that Heavensward dropped the ball in that regard. While Dark Knight and Astrologian turned out to be powerful, they never did really offer an experience that was very different from already existing jobs in that role. The new Stormblood jobs on the other hand are excellent and show that Yoshida-san might have been right all along on giving new tank/healer jobs more time to marinate and doing two new DPS jobs instead.

Red Mage finally gets to be the melee-mage that FFXIV was lacking. Being able to wield offensive Black and White magic, utilize some support skills, and having the ability to rush in and deliver powerful rapier strikes is very satisfying. For long time FFXI RDM players that were accustomed to years of RDM being a backline support class, this is the moment they have been waiting for. Samurai is an ultra powerful, lonewolf melee DPS job. It doesn’t need/add much to the party dynamic, and instead focuses on just creating insane DPS all by itself, perfect for those that like playing in that way. FFXIV has never struggled with adding fun, interesting new DPS jobs (Machinist was great), and Stormblood continues this trend.

Above all though, the highest point of the FFXIV: Stormblood expansion is its main story. Not only is it a stronger quest line than the Heavensward and A Realm Reborn sagas (which was difficult to top), it’s the best story in a Final Fantasy game since Final Fantasy X. I’m aware of how crazy that will sound to a single-player Final Fantasy fan that has yet to check out the MMORPGs, and is maybe reading this review out of curiosity. It’s true though. The writing of FFXIV has been on point since A Realm Reborn and has repeatably raised the standard for MMORPG story lines that it itself created. 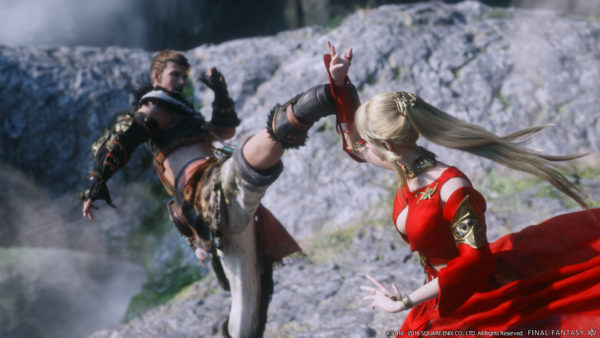 The game has three major acts that takes place across two equally fascinating and visually impressive areas: Ala Mihgo, and the Far East area around Doma; two locales that players have been hearing about and were eager to explore for years now. You’ll be tasked with liberating both these areas from long time antagonist, the Garlean Empire, led by the heartless Zenos yae Galvus. Zenos immediately thrusts himself as not only the best FFXIV villain to date, but also one of the most memorable in Final Fantasy full stop. Zenos is a cold-hearted husk of a man that wants the Warrior of Light (you) to succeed to fuel his desire for greater, more challenging battles, fueling fascinating theories that he himself is a reflection of the IRL players (which you can read about here later after you’ve completed the game or don’t care about spoilers of which there are plenty in that link).

The journey too is much improved. Yes, fetch quests rear their ugly head, but it’s not nearly as excessive as it was in Heavensward (you won’t be a slave to any Moogles this time) and most of them are wrapped around interesting subplots. Each mini-act that takes place in a new zone, feel like mini-main quests. The entire Azim Steppes plotline was deep enough in lore to be an expansion all by itself. You’ll learn a ton about Au Ra culture (which is fascinating), the political structure of the Far East, and more along the way to liberating Doma and Ala Mihgo. Even major side quests – which I usually ignore because I skip anything that’s nothing but fetch quests for extra EXP – were rich enough in lore/context that I wanted to complete them, and I’m telling you I always ignore mindless quests.

The only place where FFXIV: Stormblood stumbles is its end game, which again, is not varied enough at launch. It actually takes a step back from Heavensward, since some Heavensward content added in toward the end of its run are less relevant. It reverts back to the extremely familiar Tomestone grind—-> EX-Trials—-> Raid. And, based on what we know so far, it appears the structure for new content is going to be the same again. A new hardcore raid, followed with a midcore alliance raid, with new dungeons and trials sprinkled in-between. It’s disappointing and prevents FFXIV: Stormblood from being an all-time great expansion. 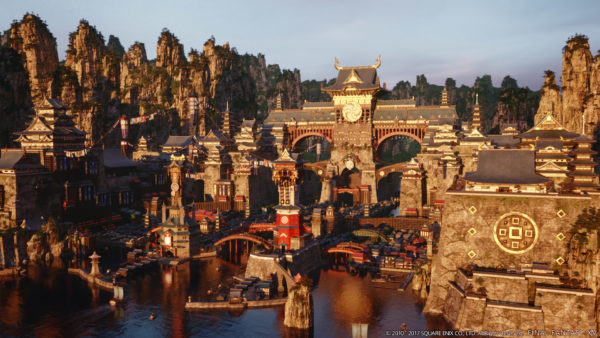 Kugane, one of two new major hubs, is a feast for the eyes.

That said, I’m less critical as I was during Heavensward of this aspect because the team at least proved that later on they were willing to experiment with adding new experiences later on. Aquapolis, Palace of the Dead and Diadem for example were all worthwhile attempts at shaking up the end game structure. Based on recent interviews we conducted with Yoshida-san, the idea is to eventually bring this content back up, and then add some new experiences as well. As much as I would prefer to see a different end game at Stormblood’s launch, I can live with the repetition for now if new content comes out at a reasonable rate like it did eventually in Heavensward. Plus the FF: Tactics inspired alliance raid will likely be very popular among the FF MMORPG crowd when it eventually gets added considering how much the classic strategy RPG inspires the jobs from both FFXI and FFXIV.

Final Fantasy XIV: Stormblood is the most polished version of the game to date. It flexes its story telling muscles and delivers a main quest that will be remembered as the gold standard for MMORPGs until Yoshida-san and his team decide to top themselves again. The older jobs have never felt fresher, and the new ones entered the ecosystem without a hitch. It’s only because of how amazing the Stormblood experience is that we’re willing to patiently wait for a more varied end game.

Final Fantasy XIV has reached its prime and I’m eager to see how long it lasts.