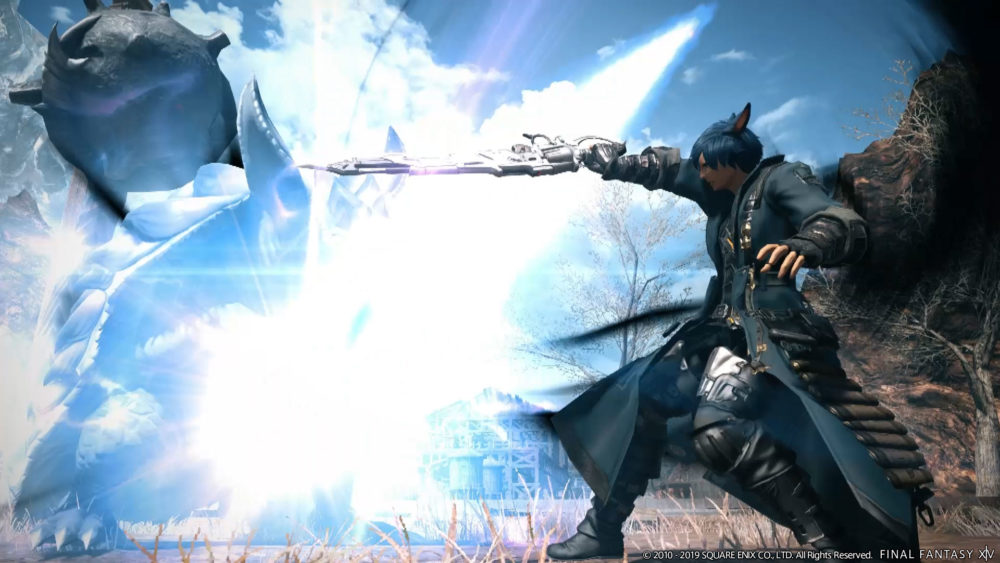 If you’ve been paying attention to the chatter surrounding Final Fantasy XIV: Shadowbringers over the last few months, you’ve probably seen some of the discussion on there being a Tank and a DPS added, but no Healer.

People are tired of DPS jobs after 2.5 of them (.5 for Blue Mage) were added in Stormblood. Tanks and Healers are braver choices I guess in the minds of many.

However, after some time with both the Dancer and Gunbreaker, I can confidently say that the Dancer is by far the more unique of the two new jobs, and Gunbreaker while fun in its own way, is definitely the safer and more familiar playing of the two.

Gunbreaker weaves in brutal slashing and tearing sword strikes with explosive attacks. Certain combos will generate cartridges that are required for special combos and attacks that will be woven into your rotation when available.

There’s a basic high potency single-target and AoE attack that you can mix in using the cartridges that have minimal cooldowns but the real prize is the Ready to Rip combo that requires a Cartridge to get started but is on a much longer cooldown.

It’s an extremely high potency, fast-paced combo that weaves in multiple different actions that continue off of each other (automatically updated, non-hotbar) which is very satisfying to use because of how quickly you’ll be hitting so many buttons and the damage it rewards you with.

All of the DPS options for Gunbreaker feel incredibly powerful for that matter.

Gunbreaker also has a healthy amount of support options as well. The Gunbreaker can send over some light heals, regen and barriers to party members via Brutal Shell, Aurora, and Heart of Stone.

Aside from that, it has all of the basic Tank actions in its kit that you would expect: AoE damage reduction, gap closer, an “ultimate” raid saver, etc.

While all tank jobs are being built to be equally competent in main and off-tank roles for Final Fantasy XIV: Shadowbringers, Gunbreaker, at least in my hour or so of playing it, seems like it would really shine in an OT role.

The Gunbreaker’s tanking kit is sufficient but very basic. What’s more interesting are its DPS and support actions and allowing someone else to worry about the main tanking while the Gunbreaker in OT focuses entirely on perfecting all of those other non-tanking related abilities seems far more satisfying, at least in this very quick glance that I got last week.

In sum, the approach for Gunbreaker as we inch closer to Final Fantasy XIV: Shadowbringer’s launch feels eerily similar to Dark Knight and Heavensward.

When Heavensward released, I felt Dark Knight was fine, but kind of samey to the other tanks and vanilla. It didn’t really have an identity other than “spooky” Paladin considering that the kit and combos were very similar.

However over time, Dark Knight started to develop more of its own unique style, and with Shadowbringers, all of the tanks are getting new abilities that make them stand out from each other. Dark Knight probably the most with its new Living Shadow action.

I’m hoping that Gunbreaker is on that trajectory. The cartridge system is a very interesting vessel for the team to utilize for future expansions and updates.

As of right now though it does feel a bit too safe for my liking. I wish some of the risk-taking that went into Dancer seeped into Gunbreaker, but I’ll take a functioning tank over a non-functioning one any day.

The dev team has proven that they are capable of spicing things up later once the foundation is set. I’m willing to be patient in this regard.

The most important thing is that the Gunbreaker has some very neat and effective job actions that should make it a worthy tank right out of the gates with little issues (pending final adjustments to job actions of course).

I do require some time in larger scale content to get a proper sense of how it feels and performs in some more chaotic and stressful situations though.

Naoki Yoshida, producer and director of Final Fantasy XIV, echoed the sentiment in an interview with us that while Gunbreaker might appear simple on the surface, there’s some nuance to it that higher-end players will be able to take advantage of.

A Summoner’s Titan could tank most of a four-person dungeon. What matters is how it will do in extreme trials and raids. For that, we have to wait and see. But for now, I’m optimistic that it will do just fine.