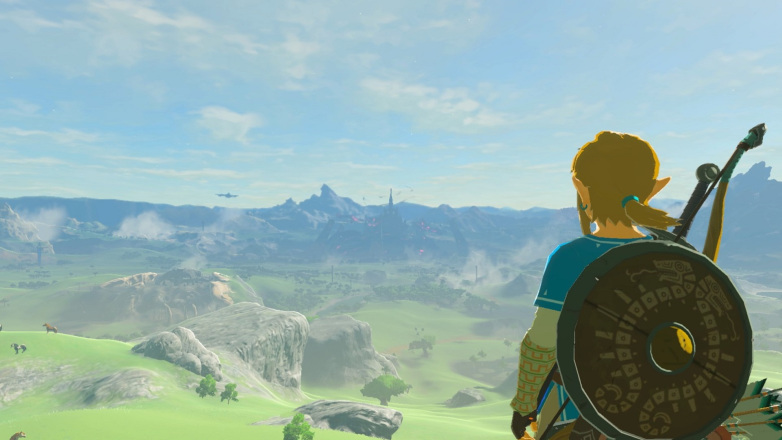 When Nintendo announced that The Legend of Zelda: Breath of the Wild and Super Mario Odyssey would be getting Labo VR compatibility updates, I was skeptical about the low-budget cardboard version of VR that Nintendo has conjured up. It turns out that, despite being made of literal cardboard, the Labo VR kit isn’t too shabby!

Last night, the updates for Breath of the Wild (and Super Mario Odyssey) released, so obviously I had to check that out. There’s some caveats unfortunately, and playing it comfortable is no easy task.

Considering that the Switch already runs at a lower resolution than other modern gaming platforms, the thought of playing a huge open world game such as BotW in anything less than the most optimal settings is unfortunate trade off, but not a deal breaker.

In the menu screen of Breath of the Wild, you can enable VR at any time, allowing you to see Hyrule in a whole new way. Yes, the resolution is low and having a Switch laying on your face might be a tad bit uncomfortable, nonetheless, I found myself immersed in Hyrule for the 30 min or so that I played the game.

In order to use the Labo VR kit with the game, you have to hold the goggles to your face and control Link like you normally would with the Joy-Con, which can be near impossible to do if you’re using one hand to hold the Switch up.

You can play with the Joy-Con attached to the Switch, but holding your hands up like that for more than a few minutes starts to become very painful –thankfully there is a better way to play Zelda in VR as long as you don’t mind looking like a total maniac.

Unless you purchase some sort of strap for the VR goggles, you’re stuck with holding it up to your face but if you lay down on a flat surface –like a bed or on the floor– you can lay the Switch on your face and play Zelda with split Joy-Con, making the experience painless and easy to control.

I even plugged in some headphones before playing to fully immerse myself into Breath of the Wild. You can slightly move the camera around Link by moving your head ever so slightly and it’s pretty much the same feeling of being very close to a huge screen, like if you were in the front row at a movie theatre.

The first thing that I wanted to do in Breath of the Wild was to climb up one of the towers and then jump off to then use my glider to fly across the beautiful landscape –which I ended up doing almost immediately. While climbing up the tower, I had goosebumps and butterflies in my stomach from the height alone.

I was there in Hyrule with Link and once I jumped off of the tower, my eyes opened up wide and I was smiling like a kid who just went on a roller coaster for the first time. It felt like I was flying and by using the VR goggles, I could look beneath me and all around to see Link’s surroundings.

Playing Breath of the Wild in this manner might make some folks nauseous due to the lower frame rates and muddied textures, but the overall experience was worth the low cost price of admission.

As long as you lay down on a bed and play exactly as I mentioned, you might find a new appreciation for the open world adventure game.

It’s unfortunate that the game loses some of its impressive visuals and textures, but that’s the price that I’m willing to pay to play Zelda in VR for the first time ever.