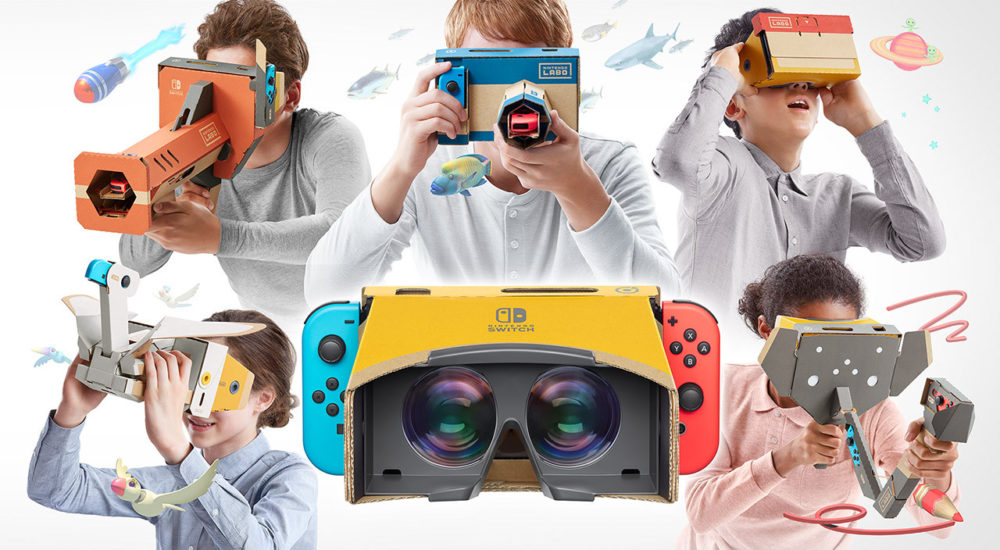 Even in 2019, after decades of video games, Nintendo is still unlike anyone else in the industry. There are experiences you can only get on Nintendo platforms, things that only Nintendo could pull off; and Labo is chief among those.

Nintendo’s cardboard sets have already been novel so far, giving you tactile objects that integrate directly into video game experiences. While we’ experienced motion control before, having actual objects to hold onto while you play is a pretty unique idea, outside of the usual steering wheels and guns and whatnot.

Now with the release of the Nintendo Labo VR Kit, that idea is taken even further, marking Nintendo’s second foray into the world of VR. The good news is, the Labo VR kit feels like a wild success, where the infamous Virtual Boy failed. It’s incredible to think about how the VR Kit even works.

All you’re really using is a set of goggles that couple with the Nintendo Switch itself to use VR. While it’s a bit lower resolution than something like PS VR, don’t be fooled, this is a full-fledged VR experience that gives you that same uncanny feeling of actually being there.

Yet it’s those cardboard accessories that really drive the heart of Labo, and the VR Kit makes better use of them than any of the prior sets. They manage to capture that childlike Nintendo magic that the company is so well-known for, and surprisingly, it even encourages the kit to be a social experience.

Each of the Toy-Cons in the VR Kit are incredibly unique, and with the whole package, you get access to the VR Goggles, Camera, Blaster, Elephant, Bird, and Wind Pedal. The Goggles alone give you access to over 30 mini-games, letting you instantly jump right in after a quick 20-minutes or so of assembly.

Meanwhile, each Toy-Con adds on a more involved, lengthier series of games. Like being able to take pictures of fish underwater with the camera, or playing an on-rails shooting game with the Blaster, that practically feels like a theme park ride.

The real magic of all of these is how tactile the Toy-Cons feel. The Camera is built to click when you use the zoom on the lens, the Blaster actually gives feedback whenever you fire it through the use of rubber bands and the Joy-Cons, and the Wind Pedal, as you might expect, gives you the sensation of wind blowing on you.

All of these help make everything that much more realistic, making it feel like you’re really playing with something, rather than just being in a virtual world. Of course, it’s also important to mention how fun it is to make each of the Toy-Cons.

There’s something truly amazing when you see sheets of cardboard form into an amazing creation, and after building multiple Labo sets I’m still amazed at how well everything fits together. There’s a simple kind of fun to be found by bringing a friend, or the family, around the TV and building a Toy-Con together.

This idea of doing things together translates over to the actual VR experience as well. Many of the games encourage you to pass the VR goggles around and play them together, making it a much more social VR experience than anything out there.

Keep in mind that the VR kit is significantly less cumbersome than its more expensive counterparts. Realistically, you could just take your Switch and the VR Goggles to a friends house and pass it around, showing off the wonders of VR to everyone. Just bring a Toy-Con with you for even more games.

Nintendo constantly puts an emphasis on social experiences with video games, and it’s amazing that the VR Kit fits that same standard. If there’s one downside it’s that the entire thing feels a bit conceptual in design, and I wonder about the longevity of appeal.

Still, if Nintendo can provide updates to other games that integrate the VR Goggles like they’re doing with Mario Odyssey and Breath of the Wild, there’s more of a lasting appeal. What they have here is impressive, and it certainly could be the basis of something much larger.

If we see Nintendo introduce a more powerful version of the system there’s even more potential, and maybe we could even see full VR games from Nintendo.

The fact of the matter really is that this is a family fun VR experience that has a much lower cost of entry than anything else on the market. Cute characters and unique gameplay mechanics fill all of the VR experiences in the VR Kit, as you might expect from Nintendo.

It’s an experience like nothing out there, and while it may not be as deep as other VR platforms out there, there’s a childlike sense of wonder to everything that only Nintendo can deliver.