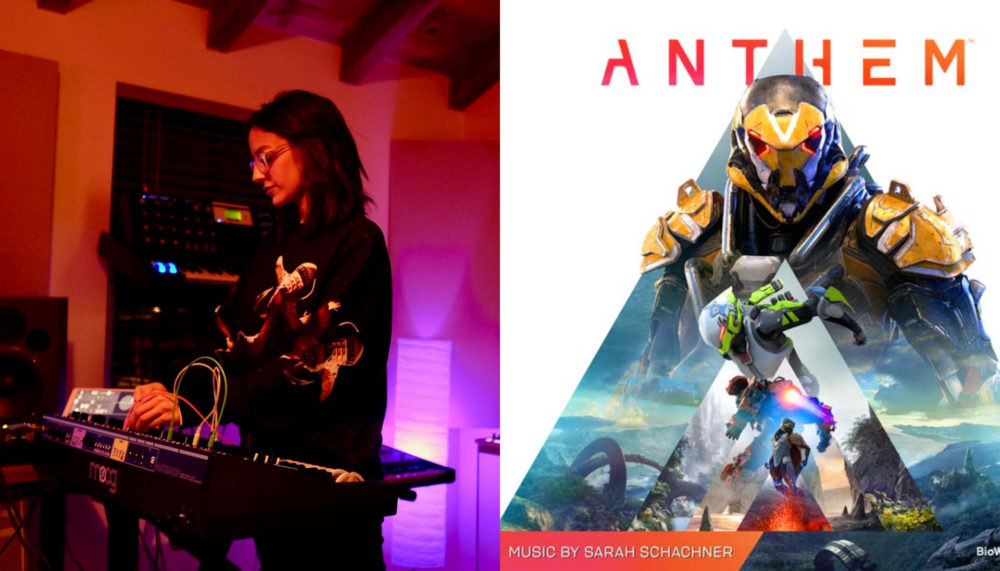 Few would say that BioWare’s co-operative shooter Anthem doesn’t have impressive graphics. There’s simply nothing else quite like watching a crew of freelancers launch themselves from Tarsis aboard futuristic javelin suits, zooming across the planet’s lush vegetation and over stunning alien vistas.

But it’s more than just the appearance of Anthem’s world that makes it so compelling. It has a palpable atmosphere that really draws you into the mystery of its sci-fi meets fantasy aesthetic, and for me, that’s in no small part due to a superb musical score.

I was a huge fan of how the tracks mixed futuristic synth sounds with a tribal sort of undertone that sounded mysterious and otherworldly.

In truth, I’ve been intrigued by Anthem’s score ever since the spectacular live performance at The Game Awards 2018; after watching composer Sarah Schachner hum its strange lyrics and play an electronic instrument that resembled a control panel from a Star Trek ship’s bridge.

So, as you can imagine, when I was offered the chance to speak with Sarah about her career working on AAA video game soundtracks and time spent on Anthem I absolutely leaped at the opportunity.

Twinfinite Senior Editor Alex Gibson: To kick things off, could you tell us a little bit about your background in the industry and how you came to be a composer for AAA video games?

Anthem Composer Sarah Schachner: I moved out to LA right after college with no job or connections. Berklee College of Music insisted that you wouldn’t find a real job on Craigslist, so at 3 AM in a semi-inebriated state I went on Craigslist and immediately found a job assisting a reality TV and trailer composer.

I couldn’t always complete his crazy errands on time, but I was able to show him how to improve his string programming and that evolved into doing work that actually involved writing music. Later, I was given the opportunity to write some additional music on a video game which led me to where I am today.

Alex: What was it about Anthem that appealed to you as a game you wanted to compose for?

Schachner: Well, first of all, Iron Man suits. Secondly, the fact that it was a brand new IP was exciting to me as I’d only worked on existing franchises. The ancient yet futuristic feel of the world was an interesting thing to explore musically and the sci-fi setting provided a lot of room for unique sounds and instruments.

The world of Anthem had a bit more of a fantasy vibe than anything I’d scored before so that was fun. I also liked the idea of embarking on something epic with your friends and how that sense of positivity and teamwork could be reflected in the music.

Alex: Could you elaborate on the process of how you go about composing music for a game like Anthem? Do the developers give you story information, screenshots, etc, or did you even play Anthem during its development as a means of helping you understand the world, lore, and style of game?

Schachner: I came on board at the end of 2017. The developers typically give a lot of general inspiration materials at the beginning, like artwork, descriptive information about the world, and any rough gameplay captures if available.

The music gets written as the game is getting made so there are a lot of moving parts, especially with a new IP which requires some flexibility during the composing process. While every detail of the story or characters may not always be known, the style of the world and big picture goals are clear so If you get the overall emotion and vibe right, it’s going to work despite small adjustments along the way.

I worked very closely with the BioWare audio team to make sure that we had a cohesive vision across the entire audio experience. We collectively drew some inspiration from cymatics, the symmetrical images made by sound waves. Also, if I was using a certain instrument (like the didgeridoo) in the score, they would then use that as a sound source for their work and vice versa. I’m really proud of what we accomplished on that front.

Alex: How does one choose the instruments for a score such as Anthem’s? Is it a case of just playing around until you have that synthetic, suitably sci-fi sound? Did you have a vision for what sort of instruments you would use for “a sci-fi” game before coming into Anthem, or would you say that the sound is unique to Anthem and something you chose specifically as a result of what you knew/played of the game?

Schachner: The sound and instrument choices are definitely unique to Anthem and its story. While it’s a sci-fi world on an alien planet, it has a very primal and jungle-y look and feel so I wanted to reflect that musically by using primitive tribal instruments like the didgeridoo and a Slovakian overtone flute called the Fujara.

I also used a modular synth and vocoder to enhance the technological side of the lore. Bioware knew they wanted the music to feel somewhere between Avengers and Middle earth so that told me right away we’d be using an orchestral foundation, but there was plenty of room to experiment with other sounds and give it my own voice.

Alex: Let’s talk about Legion of Dawn and that live performance at the Game Awards. My goodness, it gave me the chills! Can you explain how that performance came together: when was it first proposed to you, what was it like preparing for a live rendition, and what was the feeling like performing at the Game Awards to a thousand-strong live audience and millions of fans watching around the world?

Schachner: I was only told I would be performing a few weeks before the show. Initially, there was a little bit of panic over what to perform since the score is so hybrid and wouldn’t work with just an orchestra, but once I decided to perform the vocoder part, and started arranging a shortened version of Legion of Dawn, it started falling into place.

I was pretty excited that EA was on board with getting a live choir. Once I got through not falling in 4-inch heels playing violin next to Hans Zimmer, the rest was smooth sailing.

Alex: What on earth was that Star Wars-looking instrument you were playing? And were you really singing? If yes, then what are the lyrics — assuming they’re actually human? I’m always trying to sing along and I have no idea what you’re saying!

Schachner: (Laughs) It’s called a Linnstrument. It’s actually just a fancy midi controller that has independent note control for pitch bend and expression. The notes are laid out in rows like a guitar and it has some pretty fun light effects.

I was using it to control the vocoder effect on my voice. A vocoder re-synthesizes the human voice giving it that robotic humanoid sound. You have to sing or speak to give it audio signal to analyze and mimic, but the notes you hear are dictated by what you play on the controller.

The lyrics are not English, but an extinct language spoken exclusively by the predecessors to the freelancers, led by General Helena Tarsis. I totally made it up and it’s open for your own personal interpretation. One of my favorites I’ve seen so far is “Mmmm Papaya.”

Alex: Given that it’s at the core of Anthem’s entire score, can you talk a little bit about how you wrote Legion of Dawn and where its inspiration comes from?

Schachner: I wrote that vocoder melody early on in the process in a kind of free form improvisation while watching some gameplay footage. I had a video of a javelin flying over the treetops at night and it was one of those moments where I was reminded how visually beautiful the game was.

It took a while to find the right place for it in the game, but several months later when I was working on a theme for General Tarsis (“Legion of Dawn”), I realized it was the perfect fit to reflect the history of the freelancers.

Alex: Anthem isn’t the first time you’ve heard your own music in-game, of course, but what’s it like hearing your own music in a AAA video game? What is the feeling like during those poignant cutscenes when the music chimes in and builds the ambiance?

Schachner: Starting up the game for the first time on release day and hearing the main menu theme never gets old. I’m so in awe of all the other areas and details of the game that I haven’t seen finished yet so it’s nice to finally have a moment to really appreciate the years of extremely hard work that went into it.

Alex: Now that Anthem is in the bag, what projects are you looking forward to next?

Schachner: I have some very exciting game projects coming up but unfortunately nothing I can talk about quite yet. Aside from that, I’m working on another cool little project with the NASA Jet Propulsion Laboratory and hoping to get my personal music project finally underway this year.

Alex: Has BioWare spoke about future content for Anthem and the possibility of composing new music for the game?

Schachner: Yes, we’ve definitely talked about it and more music will likely be added as the game progresses over time.

Alex: When you look at the video game industry, is there a video game franchise that you would like to work on in particular?

Schachner: Scoring big existing franchises is awesome because there is already that built-in fan base that is excited about what you’re working on, but getting to define the sound of a new IP like Anthem was super refreshing and I’d like the chance to do that again!

Alex: Sarah, thanks so much for taking the time to speak with us. Is there anything you’d like to say to the fans out there before we sign off?

Schachner: Moog just released a new 4-voice paraphonic analog synth called the Matriarch which I had the pleasure of getting to explore and do a few video demos for. Any synth nerds out there should check it out! Link.