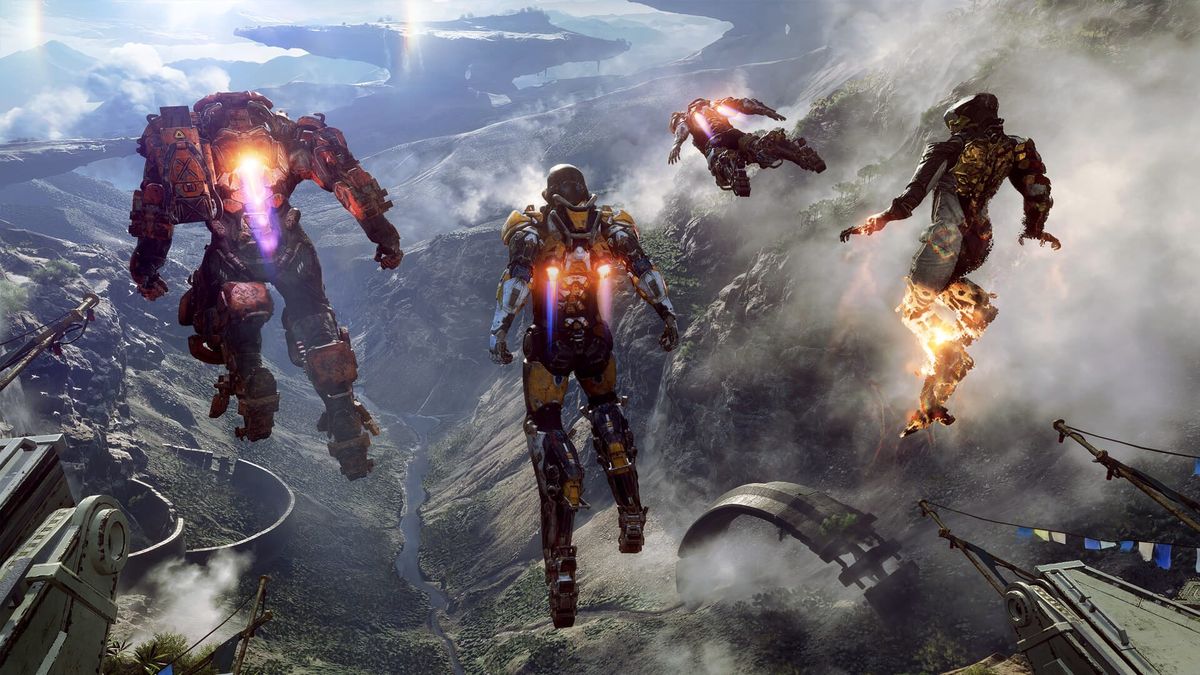 Video games are often more than just a sum of their parts. Developers have shown that games can evoke strong emotion, offer rich character arcs, and provide over the top action. Last generation, few proved this better than BioWare which developed beloved games like the Mass Effect trilogy and Dragon Age.

Anthem is a very different game from previous BioWare titles though. The goal is to blend a multiplayer loot-driven shooter with the strong narrative of a single-player campaign.

Unfortunately though, it ends up doing neither of these things at a high level just yet. Anthem’s campaign is serviceable, but when BioWare has provided such memorable and strong storylines in the past, it’s hard not to be disappointed with just a passable result when it’s coupled with a rollercoaster of ups and downs in its gameplay.

Anthem is set in the world of Bastion where an old alien race has left behind powerful technology that a group of tyrants are hellbent on getting their hands on. 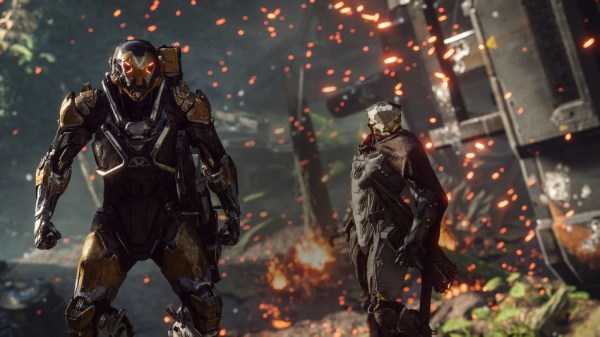 You play the role of a freelancer, a noble group of mercenaries dedicated to stopping the evil Dominion from achieving their goal. With the help of a ragtag group of characters, you begin to try and thwart the Dominion every step of the way.

Most of the character interaction comes from your base of operations known as Fort Tarsis. In this area, the third-person perspective swaps to first-person to try and give players a more immersive storytelling experience. Here you can talk to a bevy of different people living behind these walls, which helps flesh out the backstory of Bastion.

Long gone are the days of branching dialogue trees and deep character arcs. Instead, players will occasionally be offered two different dialogue options, which most of the time still lead to the same result. Not every character has something interesting to say either.

After talking to everyone I could in Fort Tarsis, only a handful of conversations really felt like they added anything valuable. There were a few instances, like a small plot line of a spy organization existing in the fort. There are also some characters from the main story like Haluk, a bitter freelancer that has seen some sh*t, that were interesting to follow. However, it’s a far cry from the deep conversations you would get into with squadmates from previous games like Mass Effect.

The main campaign as a whole is mostly spent chasing after a mystical MacGuffin known as the Anthem of Creation. No one really knows what it’s capable of but the heroes know enough that the Dominion can not be allowed to harness its power.

There’s lore that you can discover along the way, similar to Mass Effect’s codex which helps flesh things out, however the pacing of the game’s story does not really give the universe a chance to set its own table. It’s not long before you’re just jumping into traditional looter-shooter gameplay with non-AI party members, and after that the story quickly starts to feel like a side act.

Campaign missions mostly consist of fly to this point, fight some enemies, fly to the next point… rinse and repeat. Some curveballs are added in occasionally like collecting a few items and dropping them on a point while engaged in combat, but it doesn’t do enough to shake up the gameplay and as a result Anthem can get quite repetitive. 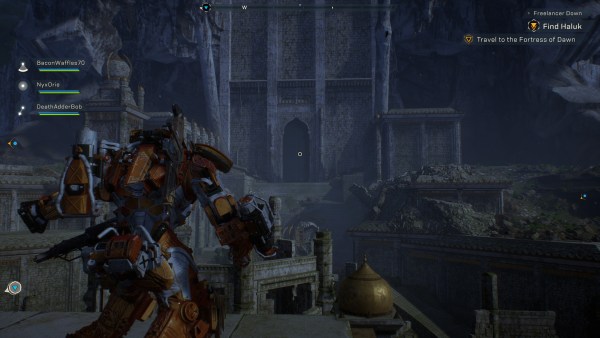 The standout gameplay feature is instead the four different javelin suits players can use. Each offers something unique to the fight and have abilities only that class can equip.

They function similarly to traditional classes from other RPG games, and do a nice job of dramatically changing the combat experience in a meaningful way.

For instance, the Storm javelin has superior flight skills and can drop massive elemental attacks from afar that can prime or detonate combo explosions. The Colossus is a tank-like class with high armor and brutal close-range attacks.

Gunplay and combat in general feels really good in Anthem, whether you’re raining abilities down from above as the Storm, or letting it rip with a minigun as the Colossus. Each Javelin comes equipped with a range offensive and defensive abilities unique to the suit which synergize with other players well.

There’s also a heavy emphasis on flight and maneuverability, way more than other games in its genre. Quickly dodging enemy attacks before going in for the kill is extremely satisfying, and feels more dynamic and tactical than just sitting behind cover waiting for an opening.

Combat becomes about creating your own opportunities with all of these tools at your disposal. Flying around to get the drop on your enemies or to simply get of out range, flows out from the combat naturally and it’s very fun.

It’s just a shame that the enemy AI is rather un-engaging, often aloof, and occasionally buggy. Plenty of times I would be gunning down a large shielded enemy for a few seconds before they even turned in my direction and by that time I had them dead to rights.

Enemy variety is also a bit of concern considering you only encounter a handful of different types. The Scar is an alien race that has a few variations like shielded snipers, base infantry, and hulking units equipped with flamethrowers and large shields.

The Outlaws are humanoids either carrying an assault rifle, shotgun, or rocket launcher and every once in a while you’ll be pitted against an Outlaw with a ranger javelin.

The Dominion are the main villains of the game, but their enemy units feel too similar to those of the outlaws. The key difference is sometimes they will use the wildlife of Bastion against you like wolves, or creatures known as brutes.

Speaking of which, some of the best fights in Anthem come from just exploring the world in free play and running into the wildlife in its natural habitat. The Ursix, in particular, is a large beast that charges the player and throws rocks, which is incredibly satisfying to dodge and takedown.

The wildlife is just a small piece of the world of Bastion. Giant waterfalls, lush jungles, and old ruins are scattered throughout the map. Anthem is a beautiful game from top to bottom.

Whether it’s diving off a cliff, or swimming through an underwater cavern, there was always something incredible to look at while flying around in Anthem. Anthem’s art style and graphical fidelity help further the immersion of the world.

Really the only problem is that the setting gets very old by the end. What you see: ruins and jungles, is pretty much what you get for most of the game.

Leveling up and fine tuning your javelin to be able to survive harder versions of available activities is what BioWare is hoping Anthem players will fall in love with in the long term. Looting new & improved abilities and weapons will increase your javelin’s power level and allow players to tackle the more difficult content Anthem has waiting for them. 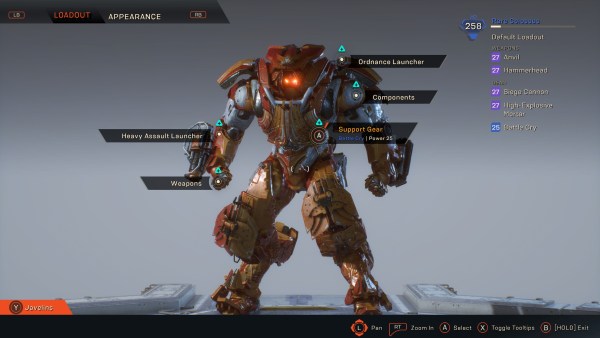 In the early stages of the game, it’s incredibly fun to try out all the new abilities to see which ones work best, but the variety becomes a problem later on .

Numbers people will enjoy min-maxing the best possible loadout, but the thrill of finding a new ability or weapon type will grow stale by the end once you’ve seen it all.

With that being said, the core loop is still satisfying enough to warrant playing through the new strongholds and contracts that appear after the credits roll. Strongholds are Anthem’s dungeons and offer boss fights that are some of the most dynamic fights in the game, making players juggle hoards of enemies while grappling with unique mechanics.

These activities are meant to be repeated on higher difficulties (tiers of what is called Grandmaster) which provide a much more significant challenge, but have the greatest chance at finding the best loot.

They require coordination and are built around understanding how your javelin can play to your team’s strengths and weaknesses. The encounters on these higher difficulties can be exhilarating, and serve as proof that Anthem can work when it’s firing on all cylinders.

There’s still a lot of work to be done with the endgame though if BioWare intends for Anthem to have the legs of similar games like Destiny 2 and the upcoming The Division 2, two franchises that have also taken their lumps along their path of getting to a space where everyone involved is more or less happy with the product. It’s a fact that I believe BioWare is very aware of, but it doesn’t change the fact that at launch at least, Anthem could use a lot more variety.

The controls of Anthem are intuitive and engaging. Flying through the world of Bastion is a sight to behold, and coordinating with your team on higher difficulties like Grandmaster is rewarding. Despite some questionable design choices and shortcomings, Anthem has a strong foundation that has potential to be a genre leader, but isn’t quite there just yet.