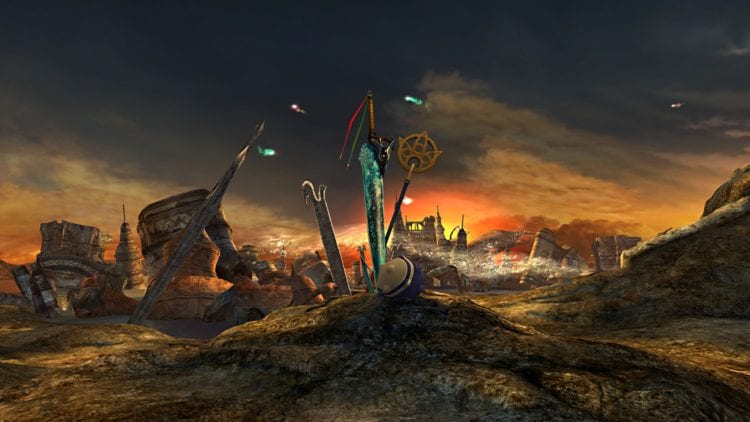 “East block, in the front row! Fifth from the right!”

I found myself inadvertently squealing in that same high-pitched voice as the enthusiastic blitzball fan girl asking for Tidus’ autograph, which was when it hit me. I’ve played this game way too much, and it’s probably a little bit concerning that I even remember this one random line from a very inconsequential, unnamed NPC in Final Fantasy X.

Final Fantasy X and X-2 will be hitting the Switch tomorrow, which marks the very first time these games have ever graced a Nintendo console with their presence. Having played virtually every single version of FFX, from the PS2 International Version to the Vita HD port, I feel pretty confident in giving the Switch version a fair assessment as well.

In short, it’s sublime. You might even say it’s sublimely magnificent, like the Sublimely Magnificent Jecht Shot Mark III.

I’ll stop with the blitzball references now, I promise.

Back on the PS2, Final Fantasy X and X-2 ran on the Emotion Engine, which was a surprisingly powerful piece of architecture that really helped to emphasize the facial expressions of the individual characters, making them feel more relatable and realistic. Technology’s certainly come a long way since those good ol’ 2001 days, but the remnants of the Emotion Engine definitely hold up well on the Switch.

Just like the HD Remaster versions that have since released on the Vita, PS3, and PS4, character models and textures have been cleaned up for the most part, and they look nice. Playing in handheld mode, the game looked deliciously crisp as well, and I even went to the trouble of charging my Vita and seeing how they compared.

Models for the main characters looked similarly impressive (at least to my untrained eye), and even the minor characters (read: Cid and the Al Bhed) looked a tad better as well. Whereas the Vita version would make their facial features appear a little muddy or blurry, they actually do look quite nice in the Switch’s handheld mode. They’re nowhere as pretty as the main party for sure, but it’s a step up.

To my surprise, Final Fantasy X on Switch also offers up a few appreciated improvements. Unlike the other console ports (save for the PS4 version), you have the option of choosing between the Arranged and Original music and soundtrack, which is huge for hardcore fans of the game. Whereas the older ports forced you into using the Arranged version, it’s definitely nice to see that Switch players will at least get a choice here.

The Arranged soundtrack is the factually better choice obviously, but y’know, do what makes you happy.

Just like the Vita version, playing FFX in handheld mode also lets you swipe the touchscreen from the left, allowing you to access a couple of quick party heal options when you’re out of combat. It’s a nice way to save some menu-ing time, but again, the feature doesn’t quite work when you’re docked.

Speaking of docked, you can rest assured knowing that both X and X-2 continue to look flawless on a giant television screen. Square Enix did a wonderful job with the first port on the PS3, and these games definitely look stunning even on a larger display.

Probably the only complaint I have with the port (and it’s a minor one) is that there’s still no way to skip cutscenes, which is ridiculous. Especially when you consider that you can now access an options menu after pausing a cutscene. You’ll get to play around with the audio options and a couple other settings when you pause a cutscene, but for some reason, Square Enix hasn’t thought to actually give us the option to skip them altogether.

Oh, and the Switch port doesn’t have Japanese voices either, so you’ll have to make do with the English dub, which is still great nonetheless.

Also unlike the PS3 and Vita ports, the Switch version includes the Credits and Bonus Audio option in the game’s main menu, which is an audio drama recorded as sort of an epilogue to X-2, or a kind of pseudo tease to a possible X-3. Don’t get your hopes up, especially since it doesn’t look like Square has any plans of capitalizing on that, but it’s there if you want it.

Frills aside, I was utterly thrilled to revisit Final Fantasy X again on the Switch. It continues to be the single best jumping point for anyone who’s never played the series, thanks to its gripping story, lack of a slow start, and extremely fun and compelling turn-based combat system.

On a technical level, it holds up remarkably well too. Watching the game switch seamlessly between in-engine cutscenes and pre-rendered ones without so much as a hitch in audio or any sort of load time continues to blow my mind. You’ll also be glad to know that Final Fantasy X doesn’t suffer from the audio looping glitch present in the recently released FFIX and FFVII Switch ports, which should be fantastic news for series fans.

Just like all the other JRPGs that have since landed on the Switch, Final Fantasy X is, of course, a perfect fit for the system. It also has the benefit of being one of the best JRPGs from the PS2 era that can still hold its own against today’s competition, and if you’re on the fence about this one, hesitate no more. It’s certainly worth your time.