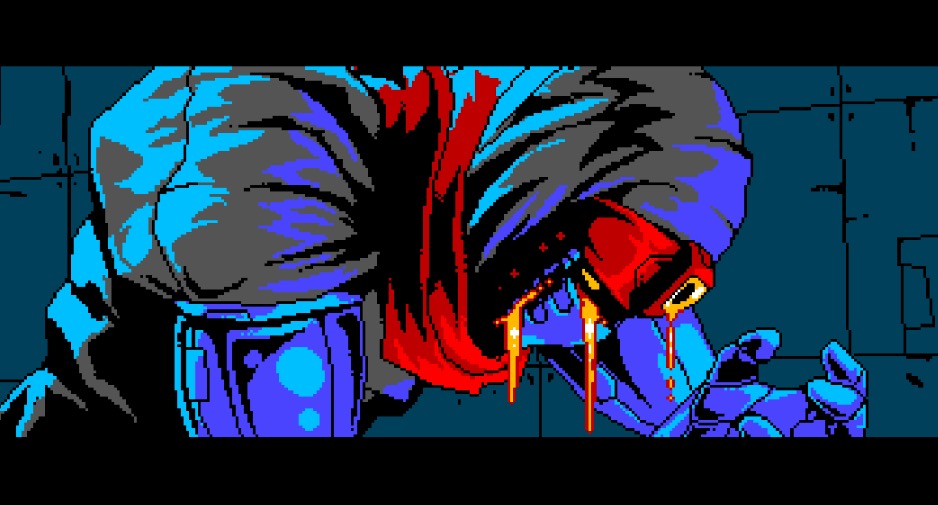 As a huge fan of Yacht Club’s retro-styled 2D platformer, Shovel Knight, I was very pumped to check out their newly announced title, Cyber Shadow.

Cyber Shadow, similar to Shovel Knight, is also an 8-bit retro platformer but after playing the first level, I can say that Cyber Shadow may look like Shovel Knight but it’s an entirely different beast.

And it’s not surprising, as Cyber Shadow is actually not being developed in-house by Yacht Club, but by an independent developer named Aarne “MekaSkull” Hunziker with Mechanical Head Studios.

Cyber Shadow pays tribute to classic platformers of the past such as Ninja Gaiden, Contra, and Mega Man, but what this game does differently is that it’s definitely not as punishing as any of the aforementioned titles.

You play as a ninja named Shadow who is on a mission to uncover what has happened to the world around him, which has been taken over by synthetic lifeforms.

As Shadow, you traverse across 2D environments in a level-based structure that moves you along the stages quickly. At first, you have a simple attack button with your sword and a jump move. The more you continue, the more skills you learn, allowing you to become the fastest ninja around.

Actually playing Cyber Shadow feels good as well; the movements are perfectly fluid, the chip-tune music had me tapping my toes, and after just one minute, I had the controls down to a tee.

While you are traversing around these beautifully animated levels, enemies come at you fast from outside of the screen, testing your quick reflexes. Most enemies die in two or just one hit, so if you are fast enough, you can get a really good rhythm going that feels amazing.

The authentic 8-bit presentation, alongside the fluid movements, made me feel like a badass ninja. I only played one level of Cyber Shadow, but from what I can tell, this game is not as challenging as Yacht Club’s Shovel Knight.

There doesn’t seem to be any penalties for death besides going back to the last checkpoint and you also don’t lose any money as you do in Shovel Knight.

Typically, when developers take inspiration from games like Mega Man or Ninja Gaiden, that automatically means that the game has to be difficult, but Mechanical Head Games’ Cyber Shadow doesn’t require too much effort from the player, which makes me more inclined to pick this game up upon release, as someone who doesn’t particularly feel like subjecting myself to too much torture.

Games that feel this good to play come few and far between and Cyber Shadow perfectly nails it, hands down. If you are a fan of side-scrollers that are quick, frantic, and call back to pixelated ninja platformers of the past, then Cyber Shadow might be the premier ninja game for you.

Cyber Shadow currently has no release date, but it will be coming sometime in 2019 for Switch, Xbox One, PS4, and Steam.