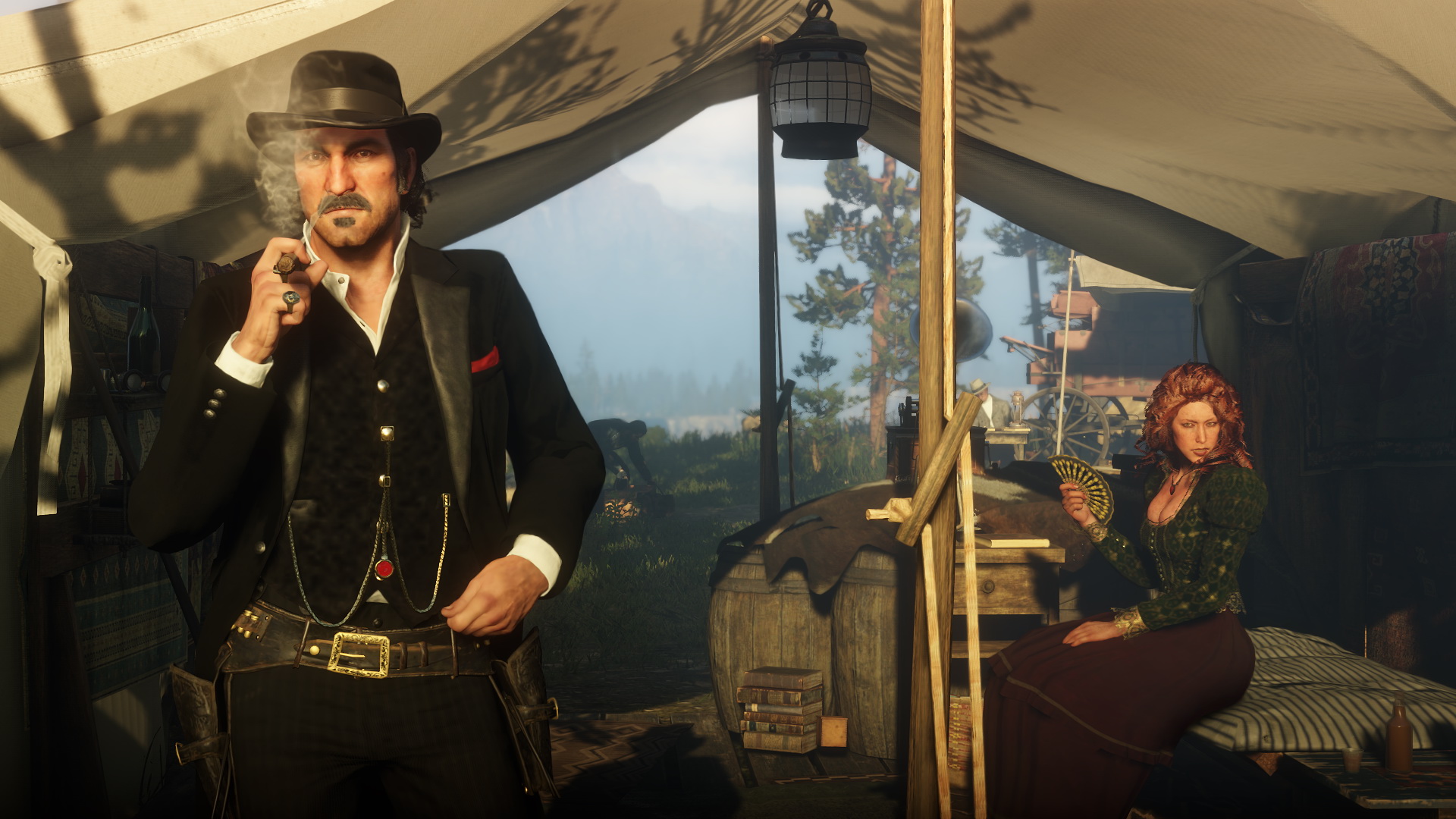 While a lot of that success rides on the game’s western themed gameplay, just as much if not more was thanks to the delivery of the game’s writing and story. The skill and effort of actors like Benjamin Byron Davis, who portrayed Dutch van der Linde, is what brought the tale of Red Dead Redemption 2 to life.

We are huge fans of the story of Red Dead Redemption 2, and more specifically, Davis’ portrayal of Dutch, naming Dutch the best character of 2018, and Davis our best voice actor of 2018.

Recently, Twinfinite had the opportunity to chat with Davis, and what better way to spend our time then to learn a little about his experience working on the game, and to give him a chance to get back into the mind of this complex character, and talk about some of the events of Red Dead Redemption 2.

Warning: If you still haven’t completed the campaign of Red Dead Redemption 2 we are going to be talking about some of the events that take place during the first few acts of the game, and there is one question that discusses events from towards the end of the game. We’ll give you a heads up when that one is happening. His answers are illuminating, but if you’re sensitive to any spoilers you might want to come back later.

If you have played through the game, or you know what happens already at least, then enjoy our in-depth conversation with the actor of the leader of the Dutch van der Linde gang, Benjamin Byron Davis, as we learn more about the incredibly troubled but interesting character that he portrayed.

Ed McGlone from Twinfinite: What was your initial reaction when you first heard that Rockstar was going to do a sequel, and that it was going be a prequel and that you were going to have a prominent role in it as Dutch?

Benjamin Byron Davis, (Dutch van der Linde): Honestly my reaction was “finally!” I had waited very patiently for three years hoping that might happen. It seemed like a long shot. I hoped that I got a call.

Rockstar being Rockstar, there is so much attention being paid to them, it’s an absolute necessity [that] they are secretive.

But they were even coy about the nature of the title of the piece, and the character. I think that we understood each other. I knew that they weren’t asking me to do some other character and have an audition.

But it was interesting too, I didn’t quite know really until we started direction, the real nature of it. Like would Dutch be in for three or four missions… I didn’t know where in the timeline this was going to take place.

So as it unfolded, it became more and more exciting to understand just how essential [Dutch] was going to be to this story they were telling. It’s probably a good thing. I think if I understood the scope of it from the very beginning I might have been terrified!

But it unfolded slowly and yet surely, and I’ll tell you, you don’t get to often play a part like Dutch van der Linde once. To get to play him twice and to have the second time be so rich and deep… I’m honored.

I viewed the role as a responsibility, not just to myself and the work that I had already done in the first game. but to every actor out there that’s hoping to land a job like this. And, most importantly, the responsibility to the fans of Red Dead.

The people who love this story they love it on a cellular level, and I think appropriately. I don’t think there’s a work of popular fiction quite like this; and if you put the two together… the way I try to describe [Red Dead Redemption 2] to people who don’t play games and the nearest thing, and this is going to sound incredibly pompous I guess (laughs), it’s like War and Peace.

It’s a masterpiece of contemporary fiction and I think the writing is of the highest caliber, and what a treat to have been a part of it. I just feel grateful and I love Dutch van der Linde.

Ed: Do you think Dutch is a good man at his core?

I definitely think he’s a principled man. I’ve seen this response from people playing the game they have this interpretation of Dutch that he’s just cheating everybody and scamming everybody all along. And that’s not something that agrees with the way that I view the character.

I think that he’s actually quite sincere and he’s not as good as he hopes he is at getting things accomplished.

Ed: What was the turning point that puts him on the path of being the villain?

Benjamin Byron Davis: I think the writing does something that is very clever. We hear that he’s done something quite horrible before the game begins, that he’s killed an innocent woman during a raid on a ferry.

Other members of the gang talk about how unexpected and out of character it is for Dutch. So, I think whatever has gone wrong with him is already in motion by the time we meet the character in the beginning of Red Dead 2.

That said, I think there are pretty notable turning points for him. One of the things that’s interesting about the structure of the game is that Dutch keeps encountering men who occupy the states that Dutch imagines he wants to occupy.

He encounters this sort of queen in Catherine Braithwaite, and most notably when the game gets to Saint Denis and counteract with Bronte, you find this very sort of strong figurehead who is both law abiding citizen but he’s also a king.

So I think if there is something that contributes to his decline mentally, if that’s the way to describe it, I think it’s the realization that this dream that he has of creating this utopia that all the gang can live in peace, he sees other people that have gone in that direction that they become corrupted to the point that Dutch does not want to be.

I think he finds himself rather shocked, and I think in that constriction of the reality that he can’t quite have the life that he’s been promising himself and his followers, he starts to unravel.

[SPOILER ALERT] This next question deals with events from towards the end of Red Dead Redemption 2. If you’d like to avoid this please scroll on down until you pass the photo of Dutch and the gang.

Ed: Over the course of the game Dutch goes from believing and trusting in Arthur to being swayed by arguments made by Micah. What led Dutch towards making that transition do you think?

Benjamin Byron Davis: If you ask Dutch, it’s because loyalty is more important to him than anything. And again, when he has his best friend Hosea with him, he’s able to hear criticism, he’s able to be talked off the ledge by Hosea. [Without Hosea] Dutch becomes very uncertain and he doesn’t know who to trust and he doesn’t even trust his own judgement.

Couple that with the fact that Arthur, who Dutch thought of always as loyal as a son, that Arthur is continually questioning [Dutch]. At the same time, Micah unwavering in his support of Dutch and without criticism and does, at least from Dutch’s perspective, anything that is asked of him.

I can imagine that from the outside looking in that it becomes quite clear that Micah shouldn’t be the one to be listened to, but again under the pressure that Dutch finds himself, there’s something very calming to him about having someone who is unquestionably loyal; and the more Arthur helps Dutch try to see the light, the more Dutch becomes sold Dutch that Arthur is not the person he can trust anymore. It’s a pretty sad track that they find themselves in.

Ed: Can you close your eyes and imagine what paradise is for Dutch, and tell me what that looks like exactly?

Benjamin Byron Davis: That’s funny, you know I never would have thought of this… but you asked it and it’s almost emotional.

I think his dream would be.. Horseshoe Overlook. I think Dutch was at his best on the run with all of his family behind him, thinking about the future. I don’t think that there was any arrival. He was a dreamer. The journey was more important than any arrival.

But I think when they all set up at Horseshoe Overlook with his family behind him, that’s him about as happy that he ever can be.

Ed: What was your favorite scene from Red Dead Redemption 2 to act?

Benjamin Byron Davis: The scene where everything really sunk in for me that this story we were telling was going to be something special but what also what sunk in for me was how great of a scene partner I had in Roger Clark was the day Dutch is sitting there an imagining a chess move rather briefly, and it’s the scene where Dutch asks Arthur, you have my back?

That scene, to me, was a big challenge. You don’t quite know yet [the extent] of Dutch’s degradation, you just knew that at this point he was uneasy.

Ed: Along those same lines, do you have a favorite, memorable, funny line, quote or monologue?

Benjamin Byron Davis: He said a lot of good things (laughs) so it’s tough to choose your favorite. Getting to play Dutch is an embarrassment of riches in terms of the writing. I like when he’s asked what they speak in Tahiti, and he says Tahitian I suppose, which I think is pretty funny.

But I guess the one speaks to the man that I think Dutch is, when he says Arthur, “don’t you never leave love aside. It’s all we got.”

I think that’s about the lesson he teaches everybody… I think that’s the truth of who Dutch is. Through all the violence, through all of the damage that he causes with his dreams, I think that he’s a person who is motivated by true love.

Ed: The most important question by far that I’m hoping you can tell us once and for all: What was the plan?

I think Dutch is a guy who has a general idea of where he wants to be. Ultimately, I think he wants to keep his gang together for as long as he can and to find a utopia as best as he can, but honestly I think that Dutch is like the Joker from the Dark Knight when he says he’s like a dog chasing a car, “I wouldn’t know what to do with it if I caught it.”

The journey is more important to Dutch than the destination.

Big thanks to Rockstar Games for setting this up, and to Benjamin Byron Davis for sparing a few minutes to chat with us!

If you enjoyed this conversation, we also spoke with Roger Clark, the actor of everyone’s favorite horse lovin’ cowboy, and the hero of Red Dead Redemption 2, Arthur Morgan. Make sure to give that a read next!