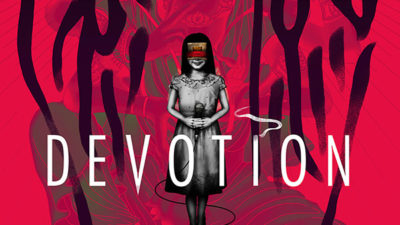 Set in 1980s Taiwan, Devotion is a terrifying story of a struggling family. You play as Feng Yu, exploring the family apartment throughout the decade, learning more about their lives. The story does leave quite a lot to interpretation, telling a lot through visions, so you may have a slightly different view of what happened. Here is our interpretation of Devotion’s story and ending.

Of course, since this in an explanation of Devotion’s ending, there will be full spoilers of the game’s story.

Feng Yu and his wife, a writer and actor respectively, live in an apartment with their daughter Mei Shin. They are both pretty successful in their careers, but Li Fang steps away from acting to look after her daughter and the household.

With Li Fang not working and Feng Yu’s work drying up, the family begins to struggle for money. Mei Shin’s parents begin to argue and Yu begins to pay more attention to a cult that he has become involved with, even giving them a significant amount of money.

The cult, which involves the worshipping of a god-like figure called Cigu Guanyin and is organized by a mysterious woman, insist that they can help cure Mei Shin, and Feng Yu believe them. He is deeply devoted to both the cult and his daughter, and it begins to mess with the family.

Feng Yu and Li Fang then separate. Throughout Devotion, Li Fang is presented as some kind of supernatural threat, with Yu seeing her as a threat to both his devotion and his daughter’s health. It is possible that he killed his wife, but that is not particularly clear.

Her parents’ split only makes Mei Shin’s mental health worse, however. She is clearly devoted to her parents, wanting nothing more than to impress them. She begins to become more and more unwell, though.

Then, towards the end of Devotion, as Feng Yu becomes more and more devoted to the cult, he agrees to follow a ritual that the people he’s become devoted to say will cure his daughter.

He puts Mei Shin in a bath full of alcohol for a full week and locks her in. The cult says that it will cleanse and cure her but she dies, presumably either from the alcohol or starvation/dehydration.

Feng Yu then become riddled with guilt and it’s a little unclear what he does. Maybe he cuts out his tongue as a sacrifice or sorts, or maybe he kills himself. We hear Mei Shin say “Daddy, let’s go home,” which could be to do with them both dying. It’s this end section that’s left more up to interpretation.

Right at the end, we then see a vision of Mei Shin walking through a forest. It seems as if she is free from both her mental illness and her father.

That’s it for our explanation of Devotion’s story and ending. If you picked up some other details, or interpreted the game in any other way, be sure to let us know in the comments below. For more on the game, be sure to check back with Twinfinite.